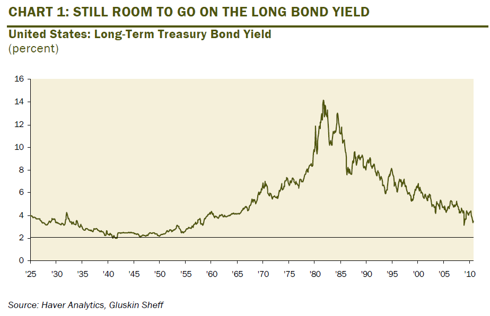 From today’s “Breakfast With Dave”:

Take a look at Chart 1, in this post-bubble credit collapse everything is mean reverting from P/E ratios, to savings rates, to debt/income ratios, to homeownership rates and the process is going to take more time and extract more domestic demand growth and pricing power out of the economy. We closed the 1930s with a 2% long bond yield, which makes perfect sense to us since the typical spread between the 30-year and the overnight rate is around 200 basis points. It won’t be a straight line, and based on past long interest rate cycles, which can last up to 32 years, we could be looking at a bottom roughly two years from now. So we wouldn’t quibble with the view that the secular bull market in bonds is in the mature stage. But it ain’t over yet.

However, if one draws a linear trend line through the current decline, it is easy to project the 2% target 2014-2020.  That window would be 32-38 years from the 1982 interest rate peak.  That interval is remarkably close to the 33-40 year rise from the bottom, depending on whether one picks the actual bottom in 1942 or the near bottom in 1949.

The symmetry of the rise and fall of rates in the 20th century cycle is interesting to look at, but there is no “law of cycles” that says the symmetry is required.  It is most likely just a matter of coincidence.  If you see a sign that reads “The End is Near”, recognize that near could be 1-2 years or 10 years (or even a little longer) to reach the top of the bond market cycle.

The last time we reached a top in bonds it came near the end of the last great credit market collapse.  The top was very broad, lasting about ten years.  The time scales may not be identical in the bond market pattern for the current credit market collapse, but it is not likely that we will go to the opposite extreme and see a bubble collapse.  Unwinding credit excesses takes a long time and is characterized by gradual change rather a big bang.  Even with the economic collapse of the Great Depression the credit markets ground like a glacier rather rushed like an avalanche.

The top of the bond market will not be a last gasp, but more like The Great Exhale  described by Jim Welsh.

3 replies on “Looking for the Bond Market Top”