The CRB raw industrials index, a composite of materials used close to the intial stages of production, reached a level of 519.93 this week, very close to the all-time high of 543.15 reached in May, 2008.  This can be seen in the following graph from the Commodity Research Bureau:

The dramatic drop of the Great Recession has been substantially retraced.  A minimum in the index was reached in November, 2009.  That was only six months after the peak, the quickest collapse in history.  Now, only 10 months later, we are approaching the old record high.  In a 2008 article I noted that the shortest interval between minima in the inflation adjusted index was 36 months, the average was 62 months (+/-19 months standard deviation), and three cycles took 7-8 years.  That means, unless we are entering a cyclic pattern much faster than experienced before, we should have 1-3 years to reach the next peak and 2-4 years to reach the next trough in commodity prices.  If we repeat one of the long cycles, it could take 4-6 years to reach the next peak and 5-7 to get to the next trough.

The bottom line is that the rapid drop and subsequent rise in commodity prices is outside the normal range of experience for the post World War II era.  These moves have occurred much faster than ever before.  Unless this represents the new normal, there should be a relatively longer interval of time to reach the next commodity peak and the following trough.

Two years ago I examined the history of commodity prices just as the peak in the CRB raw materials index was being reached.  I had the following highlights and questions at that time:

1.  The cyclical history of commodity prices placed August 2008 in the middle of the time window when a new minimum should occur, and we were at an all-time high. (In little over a year we reached a new minimum.)

2.  The inflation adjusted value of the index was in a region not seen since the high inflation period of the 1970s.

3.  One implication was that commodities could drive a new inflationary cycle.  (We all know that just the opposite has happened so far.)

4.  A question was asked:  Could commodities enter a new range of prices that would replicate the inflation adjusted values seen in the 1970s?

5.  The inflation adjusted value of the CRB index had a declining trend line for over half a century.  Could we reach an inflection point where the real CRB index could start to rise?

See the following graph from the 2008 article as you review the above points and questions: 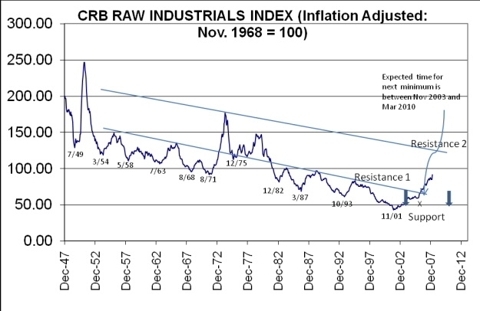 Today David Rosenberg, chief economist for Gluskin Sheff in Toronto, posted an updated version of a graph I had on my 2008 article: 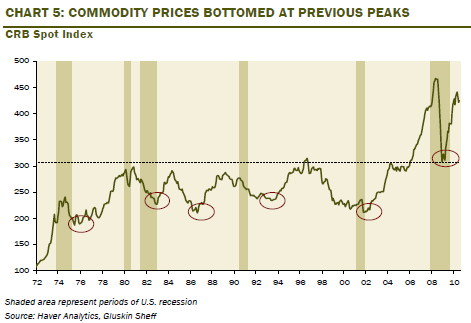 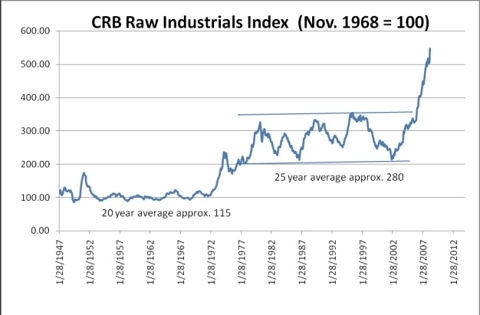 Rosenberg points out that the top of the 25-year range ending in 2007 proved to be the support level for the 2009 minimum.  If this support holds at the next minimum, the new normal for commodities may be in a higher price range than existed previously.  That is in contrast to what many feel the new normal will be for other economic factors:  lower employment levels, lower real personal incomes, lower GDP growth rates.

Commodities could have a new normal, mirroring debt, with both going higher.

The transition from the post WW II stable era for commodities to the era of the late 70s into the 21st century occurred at the end of a low interest, low inflation era.  An apparent trigger for the transition was the major bear market in stocks (bottom in 1974), an oil price shock and the serious recession of 1973-75.  The permanence of the new range for CRB was anchored by the inflationary period of the late 1970s to early 1980s.

If the new normal for commodities is to trade in a higher price range, both in nominal and real terms, it will have been triggered by similar events in the 2000s:  a long period of low inflation and interest rates followed by a major bear market for stocks, an oil price shock and the Great Recession.

We will see in the coming years if an inflationary period, which may have been a critical anchor for higher nominal commodity prices (and a bubble in real terms) in the 1970s, is really necessary to fix a higher trading range for commodities.  If not, an alternative anchor could be a shift to higher aggregate demand without a compensating increase in supply.  This would fall into the theory of limits of sustainable resource harvest from the planet.

If higher trending commodity prices do fuel general inflation, the hyper inflation that some fear would simply be accelerated.  It is not a given that will happen.  It is also a possibility that can not be dismissed.  However, it does appear that commodities may have esatblished a new normal trading range, inflation adjusted.  It will not be determined for some time, probably several years, whether the declining real prices for commodities of the past half century has come to an end.

If there is anything certain about the new normal, it can be expressed by quoting Fed Chairman Bernanke:  The current situation is “unusually uncertain”.