The big news when the advanced estimate of the 4Q/2010 GDP was announced last week was the recovery of the pre-recession level of GDP.  This was presented by some as good news, but was suitably qualified by others.

On the surface it might seem someone needs to tell Main Street that their misery must be all in their head.  (Before you go off on me, I’m being sarcastic.)  Here is the evidence of good news, provided by Business Insider: 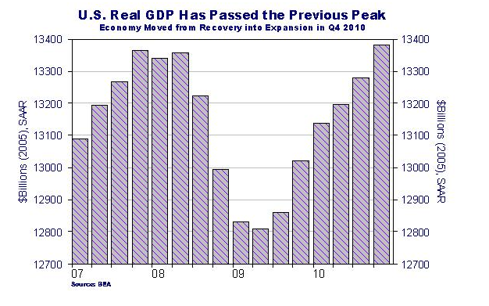 Actually, this measurement of recession and recovery is flawed.  Those who have followed me for a while know I propose that aggregate factors, like GDP, should really be measured against readings normalized to population.  After all, to use a ridiculous extreme as an example, a GDP of $1 billion for a population to 100,000 is a much bigger number (10X) in value to society than is the same $1 billion for a population of 1 million.  See here.

The following table shows the real GDP data and U.S. population each quarter for 2007-2010, inclusively.

The following graph shows that, if normalized to population, real GDP is only a little over half way through recovery. 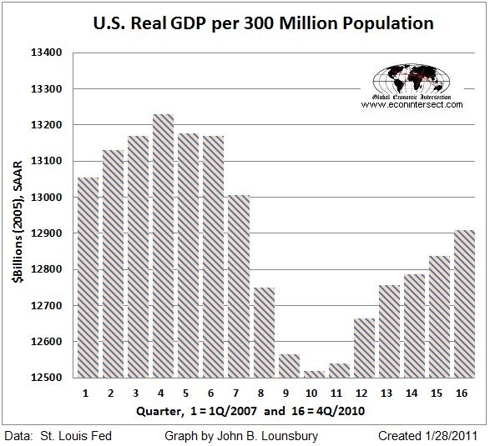 The Business Insider graph came from a BTMU (Bank of Tokyo-Mutsubishi) report which also contained the following graph: 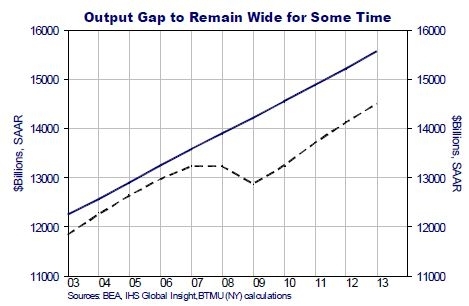 The report discussed the output gap as follows:

The BTMU report also discusses the record length of time it took real GDP to regain its previous high.  The length of time is part of the reason that normalized GDP has so much further to go to complete the recovery.  From the report:

The fact that it took a record-long time for the modern day economy to return to its previous peak speaks to the incredible amount of structural, not just cyclical problems in the economy. It seems as though the federal government, and the Federal Reserve for that matter, has learned the hard way that structural problems don’t go away just by feeding it money. Rather, the excessive feeding results in a fat, lazy economy.

Another factor that has received little attention is the inflation of real GDP by a historically low GDP deflator.  A graph by Annaly Salvos at Credit Writedowns shows nominal GDP growth: 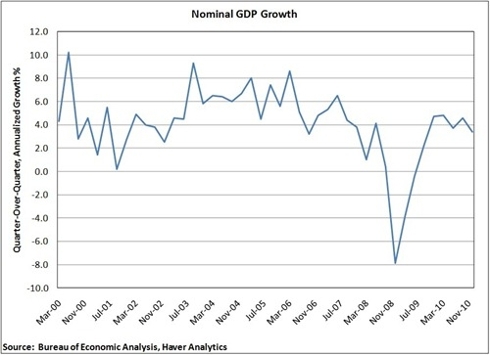 Average nominal growth since the late 1940s is about 6.8%, which included the inflationary 1970s and early 1980s, but this doesn’t seem way off. During expansions in the past 30 years, growth has averaged about 6.4%. Current nominal growth is at 3.4% and has been trending down throughout 2010. Considering that we are 6 quarters into an expansion with plenty of unusual stimulus to boot (+$2 trillion Fed balance sheet, +$1 trillion federal deficit), this low level of nominal growth and inflation is surprising.

On several fronts the celebration of the end of recovery and the start of expansion is premature:

When it comes to The Great Recession” it is a “gift” that keeps on giving.
Related Articles

11 replies on “Officially Out of Recovery and into Expansion – NOT”