It is common practice to normalize economic activity for inflation. This is the usual way in which GDP is reported, as “real GDP.”  In this article we will examine what I am calling “normalized GDP”. This is real GDP per capita. The basis for normalizing real GDP to population is that a billion dollars of GDP for 150 million people has double the value to the national economy compared to the same amount for 300 million people.

There has been some discussion about whether or not GDP is the best measure of economic activity. We will not consider that question for now and use GDP as the measurement with which to examine the business cycle. This article is an extension of a discussion in a prior article.

The graph below compares Real GDP and Real GDP per capita. Both start at the same value on January 1, 1947.

Normalized GDP (real GDP per capita) increased less than half as much as the real GDP not adjusted for population growth. Another way of stating this is that the per capita economic productivity (compared to real GDP) has lagged by more than half over the past 64 years.

Impact of Normalization on the Business Cycle

Since GDP per capita has lagged so dramatically over the past several decades, it is fair to ask if normalization would have any impact on the determination of the business cycles discussed in the  prior article.  In that article we defined the “new business cycle” which is comprised of (1) a decline of economic activity from a peak to a trough (recession), (2) a recovery to the previous peak and (3) an expansion above the previous peak. Every recession is part of a depression. A depression encompasses the recession and recovery phases of the new business cycle. 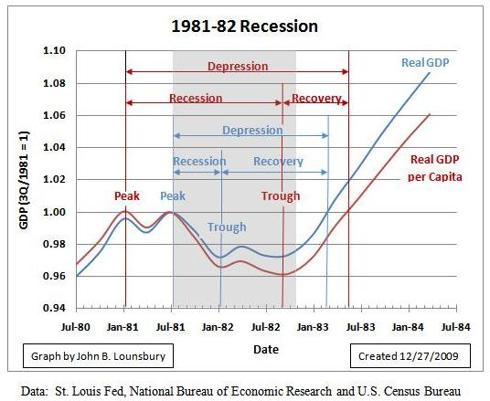 Clearly, the normalization of GDP has had a significant impact on the measurements surrounding the (official) recession of 1981-82:

The tables below gives the dates for elements of the business cycles from 1948 to date.  The first table gives the dates based on real GDP and the second is for normalized GDP.

The tables compare the durations of recessions and depressions for real GDP and normalized GDP associated with all NBER designated recessions during the past 60 years.

For easier comparisons, the real and normalized recessions and depressions are summarized in the following table:

There are a number of conclusions from this data (1948 to date):

Comparison to the Great Depression

The recessions and depressions in the last 60 years are much shorter in duration than in the earlier period using NBER and GDP data as indicators. The detailed analysis of these comparisons will be covered in a future article.

Many would look at the official NBER recession dates and come to the conclusion that, since recessions only occupied 112 months during the 54 years that from 1948 to 2001, the economy was expanding 83% of the time. Any one who does that is guilty of double dipping; they are counting twice all economic growth that occurred in the recovery from the trough to the level of the preceding peak. Normalized GDP data shows that 63% of the time from 1948 to 2001 the economy was expanding, while 37% of the time the economy was in depression (recession plus recovery). This alone is enough reason to adopt the new business cycle definition that was the topic of the prior article.

However, there are additional benefits. Using this methodology we can look at other economic indicators in addition to GDP. Employment is said to be a lagging indicator. What that means is depression in employment does not always track the timeline check points of some other indicators; the recession periods and recovery periods can each have characteristics different from GDP. This was especially noted in the recessions/depressions that started in 1990, 2001 and is expected to occur in the current downturn. Employment will be specifically examined in a future article.

10 replies on “Normalized GDP is the “Real” Growth”