Note:  This is an expansion of an August 20 article on Seeking Alpha.

A graph from http://www.chartoftheday.com/ has been annotated by the author to highlight similarities of the current era for stocks to a corporate earnings pattern traced out nearly a century ago. 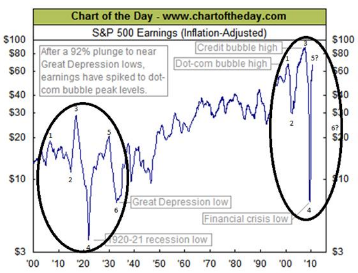 The time scale of the current era (right hand oval) is compressed relative to that of a century ago, but the occurrence of extremes displays a remarkable similarity in pattern with events 1-4 from 1907 to 1921.  It is tempting to project that the rest of the pattern could repeat, but I refer you back to the title question.  Perhaps the replication of events 1-4 is as far as the current pattern will go.  Or perhaps the pattern replication is pure coincidence.

I am not aware of the data source for the graph above since the S&P 500 has only a 60 year existence.  Data before 1950 must be created by simulation.  The most widely recognized simulation has been constructed by Prof. Robert Shiller, Yale University and this may well be the data used.

The pattern of graph in the 1920s and early 1930s implies that the collapse of earning in 1921 might have resulted from structural economic problems that were insufficiently addressed in the years that followed, resulting in the subsequent economic breakdown from 1929-32.  One economic occurrence of the 1920s was the concentration of income and wealth in the hands of a few.  This is a phenomenon that has occurred again over the last 10-20 years and appears may still be in progress.  See the following graph from Emmanuel Saez: 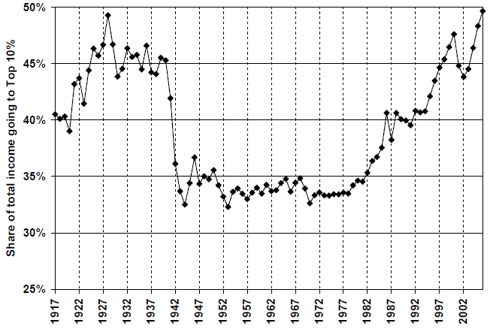 Are there any other major contributors to income distribution besides the obvious one of federal income tax policy?  For example, is the rise of high income concentration in the 1990s the result of a flurry of innovation in the new information technology?  Or, is the rise of the 2000s the result a flurry of financial innovation?  We will return to the two “flurries” after looking at the tax policy question.

The following graph from David Cay Johnston emphasizes the dramatic shift in tax burden away from the very top income earners over the 45 years from 1961 to 2006.  It is obvious that changing tax codes have been an enabling factor in creating a concentration of after tax income at the top.  Do tax codes that have lower top brackets encourage a “take the money and run” strategy at the top instead of building wealth by retaining earnings to grow a business through investment of profits?  What really helps an economy grow – building businesses or taking money out of them?

Considering the two flurries mentioned previously (dot.com bubble and credit/housing bubble), were both positive for promoting a growth of economic activity?  If you peel the speculative gains out of the 1990s, the result was a revolution in communications and commerce.  Some of the growth in high incomes was from speculation, but that was quickly stripped out on the collapse of the dot.com bubble.  I maintain that there was a residual economic benefit from the dot.com bubble.  Things of economic utility were produced.

I have difficulty in coming to a similar conclusion for the credit bubble of the 2000s.  Has anything of economic utility resulted?  I have not found it.

And counter to the effect of the dot.com collapse, the credit bubble collapse may not have stripped out some of the speculative income excesses.  Wall Street bonuses are back to pre-crisis levels and there has been no “claw-back” of ill-gotten gains from the pirates who seized the economic ship.  In fact, the pirates are still in command of the ship and are still under full sail.  Yo ho ho and a bottle of rum!

From my first Treasury report:

I threw out the idea that the problem was that our systems, especially in finance and health care, are too heavily focused on pay for transactions rather than pay for outcomes. I didn’t have the presence of mind to bring instant gratification into the discussion, but that would have certainly made my thought process clearer.

I don’t think this created any waves, but I will continue to wail in the wilderness about how compensation formulas contribute to and compound the structural problems in our financial system.  It is a significant problem for the survival of our society.  As Jeff Nielson has pointed out:

Indeed, the issue was settled more than 2,000 years ago, if you believe the words of Plutarch: “An imbalance between rich and poor is the oldest and most fatal ailment of all Republics.”

So, back to the earnings chart that started this discussion.  In view of what has been discussed here I believe we will find that history, in this instance, will at least rhyme, if not repeat exactly.  Structural economic problems are sufficiently similar for the two eras that I expect we will see some form of recurrence of events 5 and 6.

I hope I have thrown down a gauntlet that will be picked up by those with other views.  I want to know where I have let my thinking go wrong.

2 replies on “Does History Repeat, Rhyme or Just Have Coincidences?”