With the Russian invasion of Ukraine and the prospect of a combustible great powers confrontation, the natural reaction of any economist is: “So what’s up with Ukraine’s economy, anyway?” Let other people look at maps; I look at economic statistics.

Ukraine has a population of 46 million, roughly the same as South Korea, South Africa, Spain, or Colombia. Its economy in 2012 was $176 billion (measured in current US dollars), which is a little larger than New Zealand or Vietnam, but a little smaller than Romania or the Czech Republic. Thus, per capita GDP in Ukraine was about $3800 in 2012, which is roughly similar to Indonesia, El Salvador, and Albania, in what the World Bank categorizes as the “lower middle income” part of the income distribution.

The CIA World Factbook summarizes Ukraine’s economic situation in recent years like this:

“Ukraine’s dependence on Russia for energy supplies and the lack of significant structural reform have made the Ukrainian economy vulnerable to external shocks. Ukraine depends on imports to meet about three-fourths of its annual oil and natural gas requirements and 100% of its nuclear fuel needs. After a two-week dispute that saw gas supplies cutoff to Europe, Ukraine agreed to 10-year gas supply and transit contracts with Russia in January 2009 that brought gas prices to “world” levels. The strict terms of the contracts have further hobbled Ukraine’s cash-strapped state gas company, Naftohaz. Outside institutions – particularly the IMF – have encouraged Ukraine to quicken the pace and scope of reforms to foster economic growth. … Ukraine’s economy was buoyant despite political turmoil between the prime minister and president until mid-2008. The economy contracted nearly 15% in 2009, among the worst economic performances in the world. In April 2010, Ukraine negotiated a price discount on Russian gas imports in exchange for extending Russia’s lease on its naval base in Crimea.”

From a broader macroeconomic perspective, the key problem for Ukraine’s economy is that it has been running very large trade deficits. In addition, Ukraine’s economy is highly interconnected with other countries: exports and imports both run at about 50-60% of GDP. Because Ukraine’s trade deficits are large, Ukraine depends on large inflows of capital from other countries, and thus has high and unsustainable levels of debt service to pay. A potential answer here is to devalue the currency, and there was a 40% devaluation back in 2008. But when so much of what a country buys and sells is in world markets, a large devaluation of your currency is wildly unpopular–in effect, it makes the cost of all exports fall and the cost of all imports rise.

Let’s take a stroll through these facts, using graphs generated from the World Development Indicators website run by the World Bank. As a starting point, here’s are exports and imports as a share of GDP in Ukraine. Notice that Ukraine’s level of trade is high, with exports and imports both exceeding half of GDP. Notice also that a big trade deficit (red line above the blue line) opened up around 2008, and again in 2012. 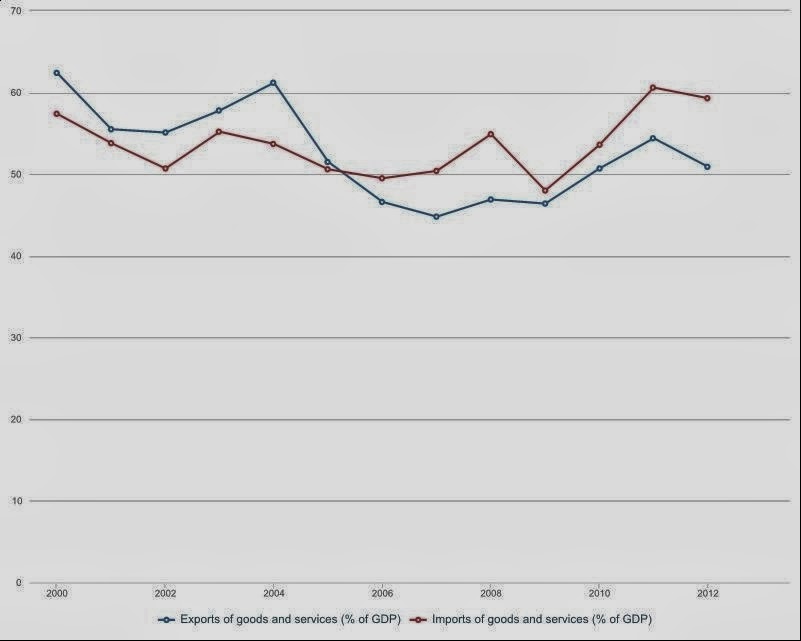 Here’s a graph just focusing on Ukraine’s current account balance since 2004. The trade deficit was almost 8% of GDP back in 2008, and larger in 2012. 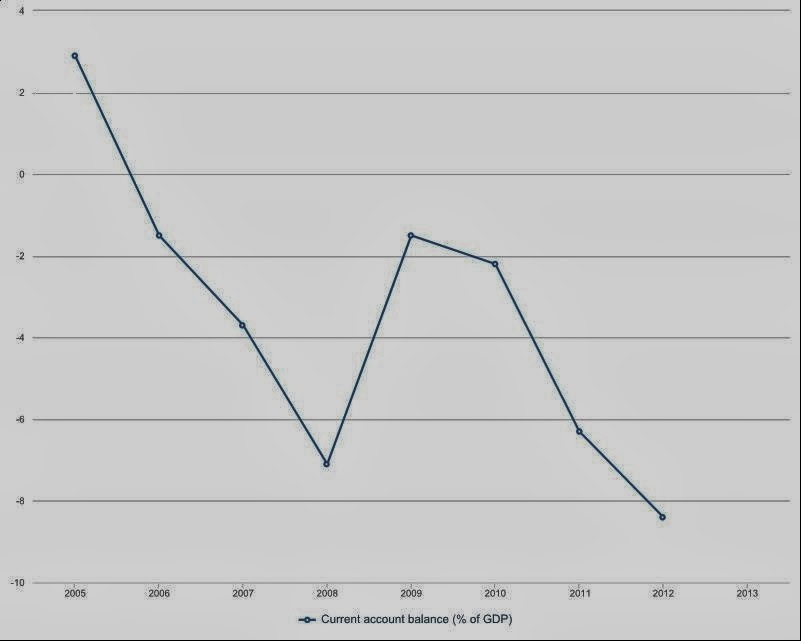 An economy with a large trade deficit depend on equally large inflows of foreign capital. When it appears that those inflows of capital will not be repaid, and thus are unlikely to continue, the IMF often enters the picture. When the global economic crisis hit in 2008, the market collapsed for Ukraine’s main export, steel, and international capital stopped going to Ukraine. The value of Ukraine’s currency plunged 40%–in other words, Ukraine’s exports were selling for 40% less on world markets and Ukraine’s imports cost 40% more. Here’s a graph created by the useful XE.com site showing the exchange rate for Ukraine’s currency, the hryvnia, in terms of how many hryvnia per euro. More hyrivia per euro means that the currency is getting weaker. You can see the major currency depreciation, followed by a more-or-less stable currency up until very recently, and then another huge depreciation. 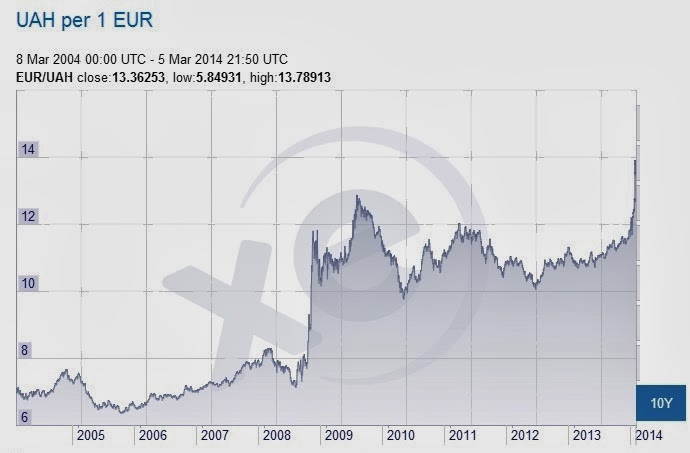 Back in 2008 Ukraine’s banking system (like the banks of most developing countries) had borrowed in foreign currencies, and when the Ukrainian currency was worth so much less, those loans couldn’t be repaid on time. In 2008, the IMF loaned Ukraine $16.8 billion. As always, the IMF loan was intended as short-term help so that the economy could get over the short-term crisis over the hump so that it has some time to put its economic house in order. The banking system was recapitalized, and Ukraine agreed to policies like reducing energy subsidies and restraining wage subsidies (while protecting those with low incomes).

But by December 2013, the economic situation in Ukraine was looking dire all over again. The same cycle of large trade deficits, capital inflows that turned on and then turned off, and banks that couldn’t repay their international loans had surfaced all over again. But this time, the IMF felt that Ukraine had not kept its promises of reform in 2008, and was reluctant to step in again. That’s when Vladimir Putin stepped up with his plan to buy $15 billion in Ukrainian bonds and also to offer lower natural gas prices.

The IMF put out a press release on December 19, 2013, summarizing its concerns about Ukraine’s economy. Here are a few points that caught my eye:

“The Ukrainian economy has been in recession since mid-2012, and the outlook remains challenging. In January-September 2013 GDP contracted by 1¼ percent y-o-y, reflecting lower demand for Ukrainian exports and falling investments. … Weak external demand and impaired competitiveness kept the trailing 12-month current account deficit elevated at about 8 percent of GDP by end-September despite a significant reduction in natural gas imports. The high current account deficit amid less favorable international market environment pressured international reserves, which fell below the equivalent of 2½ months of imports by end-October 2013. The fiscal stance loosened in 2012-13, contributing to the buildup of vulnerabilities. Large pension and wage increases, generous energy subsidies, and soccer cup spending led to a widening of the combined deficit of the general government and the state-owned company Naftogaz to 5½ percent of GDP in 2012. In 2013, the combined government-Naftogaz deficit is projected to expand to 7¾ percent of GDP. … An inefficient and opaque energy sector continues to weigh heavily on public finances and the economy. Overall energy subsidies in Ukraine reached about 7½ percent of GDP in 2012. The very low tariffs for residential gas and district heating cover only a fraction of economic costs and encourage one of the highest energy consumption levels in Europe. As a result, Naftogaz’s losses in 2013:H1 more than doubled and the company is late on payments for imported gas.”

The IMF writes that Ukraine has “low program policy ownership,” which basically means that the government doesn’t do what it says it will do, like trimming back on energy subsidies and wage subsidies. For example, a table at the bottom of the IMF reports that real (inflation-adjusted) wages in Ukraine rose 8.8% in 2011, 14.2% in 2012, and 9.3% in 2013, which is not a sign of economic health, but rather a sign that the government and its pet energy company are borrowing hand-over-fist to subsidize wages in many areas.

Ukraine’s economy has some strengths. Inflation is under control. Unemployment at about 8% is not super-high. The accumulated public debt, at about 41% of GDP, is not especially high. But Ukraine is also a highly open and not very diversified economy, and thus highly vulnerable to movements of a few key prices on world markets–steel exports, energy imports, its own exchange rate. Add undisciplined government spending that hands out copious energy and wage subsidies, together with an unstable financial sector and a lack of productivity growth, and Ukraine’s economy is primed to melt down, as it did in 2008 and again in 2013. With the current turmoil, it’s obviously not a convenient time for Ukraine to be building stronger economic and political institutions. But without such reforms and institutions, Ukraine’s economy will remain highly unstable.