In the press conference immediately following the December 17-18, 2013 FOMC meeting, Fed Chairman Bernanke indicated that it was the FOMC’s current plan to have terminated Federal Reserve outright securities purchases by the end of 2014, commencing with a $10 billion reduction in securities purchases immediately after the December 2013 FOMC meeting and then continuing to taper its purchases by about $10 billion after each 2014 FOMC meeting. Of course, this tapering plan is subject to modification in either direction depending on forthcoming economic and financial market developments.

This tapering plan is much more aggressive than what I had anticipated. I had thought that the FOMC would pare its securities purchases back from $85 billion per month to $75 billion per month early in 2014, hold them there until mid 2014, and then pare them back to $65 billion per month for the remainder of 2014. My assumption was clearly wrong by an order of magnitude. If the Fed were to follow through with its announced tapering plan, then, all else the same, this would represent a significant tightening in U.S. monetary policy, with negative implications for the behavior of the U.S. economy and U.S. risk-asset prices starting sometime in the second half of 2014 and extending into 2015.

Of course, all else is unlikely to be the same. From my perspective, the most important factor bearing on the restrictiveness of the Fed’s tapering plan will be the amount of credit created by commercial banks and other depository institutions. If banks should step up their credit creation to its 50-year median pace of 7-1/2%, then the Fed’s tapering will not have resulted in any meaningful tightening in monetary policy.  Alternatively, if bank credit continues to grow in 2014 at its paltry 2013 December-over-December pace of 0.92%, then I would expect a sharp deceleration in the growth of nominal domestic spending to take hold sometime in the second half of 2014.

The reason I mentioned 1937 in the title of this commentary is that in the aftermath of Fed restrictive policy actions commencing in the summer of 1936, the U.S. economy, which had been experiencing a vigorous recovery, slipped back into recession in mid 1937. On August 16, 1936, March 1, 1937 and May 1, 1937, the Federal Reserve raised the percentage of reserves banks were required to hold against deposits. The cumulative effect of this was to double the required-reserve ratio. The rationale on the part of the Fed for this doubling in the required-reserve ratio was to “soak up” what, at that time, was a massive amount of bank regulatory excess reserves. The Fed feared that banks would aggressively begin using these excess reserves to create credit, which, in turn, might result in a sharp acceleration in inflation. What the Fed did not understand was that these excess reserves held by banks were not “excess” in an economic sense. Because of the experience of bank runs in the early 1930s, banks desired to hold more idle cash reserves for liquidity purposes. As the Fed increased the required-reserve ratio, which converted hitherto regulatory excess reserves into required reserves, banks, trying to maintain their higher desired liquidity ratios, pared back their loans and securities. Bank credit, which had started growing again in 1934 after its severe contraction in the early 1930s, stalled out in the second half of 1936 and began to contract in the second half of 1937. The business expansion that had commenced in the spring of 1933 peaked out in May 1937. 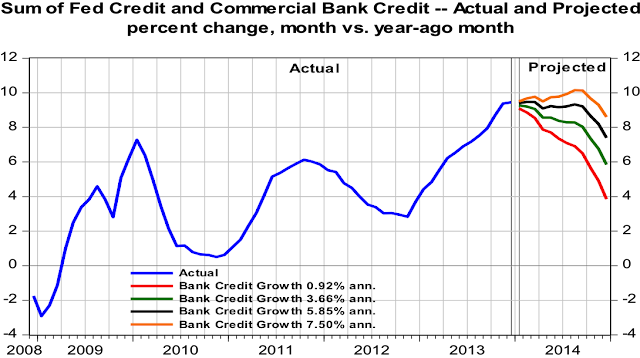 So, my best guess right now – and that is exactly what it is, a guess – is that in 2014 bank credit will grow on a December-to-December basis in a range bounded on the low side of about 3-1/2% and on the high side by about 5-3/4%. If bank credit growth in 2014 comes in toward the low side of this range and the Fed hues to its current tapering plan, then I would expect a significant deceleration in the growth of nominal U.S. spending to occur no later than the fourth quarter of 2014 and to persist into the first half of 2015. In the event, the performance of risk assets would begin to falter early in the second half of 2014 and the performance of investment grade fixed-income securities would begin to improve. Alternatively, if bank credit growth in 2014 comes in toward the high side of this range and, again, the Fed maintains its announced taper plan, then I would expect only a moderate deceleration in the growth in nominal U.S. spending during the second half of 2014 and I would expect continued outperformance of risk assets vs. investment grade fixed-income securities.

Before signing off, I want to comment on how the Fed determines its tapering decisions. From reading FOMC minutes and listening to public comments by Fed officials, I do not believe that the Fed understands how its securities purchases affect the economy. The Fed seems to think that securities purchases affect aggregate spending by lowering the yields on longer-maturity securities, which, in turn, increases the quantity of borrowed funds demanded. Perhaps the more academic of Fed officials believe that Fed securities purchases stimulate aggregate demand through some complicated portfolio-substitution effect. As I have written in many previous commentaries, I believe that Fed securities purchases stimulate nominal spending because they inject funds into the economy that are created, figuratively, out of thin air. Because these funds are created out of thin air, the recipients of these funds can now spend them without anyone else needing to cut back on his/her current spending. Also, as I have written in many previous commentaries and have implied in this current one, the way I evaluate the degree of accommodation or restriction of Fed policy is by the growth in the sum of Fed securities holdings and loans/securities on the books of depository institutions. If, in my, admittedly, minority opinion, the Fed does not understand how securities purchases “work”, how would it determine how many securities to purchase?

When the Fed announced on September 13, 2012, that it planned to purchase each month $85 billion of securities, it did not explain how it arrived at this amount. I seriously doubt it was based on the fact that in August 2012, year-over-year growth in the sum of Fed and bank credit had decelerated to 3%. Rather, the decision was likely based on the fact that growth in economic activity was punk, resulting in an unemployment rate stuck at an undesirably high level. Fast forward to December 18, 2013, when the Fed announced the commencement of its tapering program. Again, I seriously doubt that the tapering decision was based on the fact that in November, the year-over-year change in the sum of Fed and bank credit was 9.4%. No, the decision to begin tapering was most likely based on information that growth in economic activity had picked up and the unemployment rate was now falling at a more satisfactory pace. The behavior of the economy has a lagged response to the behavior of the sum of Fed and bank credit. Moreover, the data pertaining to the behavior of the economy is reported with a lag and is subject to significant revisions. In other words, Fed policy decisions are made on the basis of what it sees in the “rearview mirror”. As my scenarios for the 2014 in the chart above suggest, except for Scenario 1, growth in combined Fed and bank credit does not exhibit significant decelerations in the first half of 2014, especially in the first quarter of 2014. So, I would not expect a significant deceleration in the growth in nominal U.S. spending in the first half of 2014. If anything, I would expect some acceleration in the growth of nominal spending given the growth acceleration in the sum of Fed and bank credit in the fourth quarter of 2013. So, if bank credit growth in 2014 were coming in toward the lower bound of my suggested range, around 3-1/2% annualized, the Fed would be unlikely to cease its tapering of securities purchases until the fourth quarter of 2014, by which time it would be too late to avert a significant deceleration in growth in nominal spending.