Humans have been repeating this inefficient ritual for over 700 years, with the first known origins then in Europe. There sprung lenders and insurers who assessed the relative merits of individual commercial risk. The methods were somewhat more crude versus the resources available to people today, but none-the-less this is the humble birthplace from where modern investment speculation gets its origin. What should be the effective interest rate to lend an emerging company wanting to complete a construction project? What should an insurer charge to protect a ship voyaging across a stormy sea, so that the premium pricing is both attractively profitable yet competitive?

Over time, more information was rapidly made available concerning those who needed capital market resources. And more ordinary people were able to invest in companies and products. Through the distribution of personal wealth and technological progress, society experienced episodic bouts of speculations and manias. The conversion of defined benefit plans in the U.S. to one where American workers invest their own contributions, combined with draining real median wage growth, created a force for even greater heterogeneity of outcomes in the desperate and greedy individual pursuit of α (alpha). And then the digital age took these advances to another level, now allowing virtually everyone to more quickly and easily trade however they want. But how can these seeming innovations be good for society, if there is a slimmer portion of risk-adjusted beneficiaries? Let’s explore the outcomes and difficulties in the great, inefficient search for exceptional alpha.

The true statistical test for outperformance relative to a highly liquid, and investable benchmark takes into account how likely such performance could have been attained by luck alone. After all over any period of time, there will be separation in the market fates of individual stocks within a basket. Concurrently, some purely lucky stock holders will own specific stocks that just uniformly outperforms the underlying index over this same period of time.

Nonetheless it is worth noting that the difficult statistical standard necessary to warrant the concept of skill over a long career, or life, has a smaller side effect. And that is that only minorities of those who speculate will actually have, through skill, statistically outperformed the broader stock index.

Let’s show how this works, using the time since the recent financial crisis as a baseline frame for this analysis. From there we’ll expand to a broader set of applications and time frames. The market has gone through a large hockey-stick pattern since the height of the financial crisis, 5.5 years ago. Equity markets initially plummeted through early 2009, but have since smoothly rallied to new highs.

If you and your friends had all tried your hand at stock selection and market-timing along the way, then there is a good chance that you are feeling pretty good right now. Making money is always a welcome relief, but emotional confidence inflates disproportionately with one’s portfolio. Even more, in the case of the vast majority of people (those who didn’t double their investments alongside the market index, but rather quadrupled it), feeling too good is simply unwarranted. Humility must substitute for hubris, since luck accounts for a great deal of post-crisis performance.

How likely is it that an investor (or speculator) in U.S. equities over the past 5.5 years has demonstrated significant investment skills in this asset class? For our test we reduce the investable universe to a mapping of the current 30 Dow Jones Industrial Average (DJIA) stocks. We start with a performance threshold of selecting a basket of any of the top quarter of these 30 stocks for each of the past 5.5 years. And these top 8 stocks had a minimal monthly outperformance of 1.2% (15% annualized), with a 0.5% standard deviation. This implies a significantly low, 1% chance of straying that far from the rest of the DJIA by chance alone.

Then being satisfied with our critical threshold, we next solve the probability of continuously selecting a basket of the annual top quarter of DJIA stocks by chance alone. This is an elementary, compounded Bernoulli problem, and it comes to 0.1%.

While there are empirical differences that would ensue from, not the β (beta) of the 30 DJIA stocks, but rather from the component of the typical correlation and dispersion components of beta. For example, when the correlation is high and the dispersion is low, then more than typical portion of the investing population at that time would be able to outperform based on skill. And when the opposite parameters define the investment regime, then less than the typical portion of the investment population would be able to outperform based on skill.

Theoretically expanding this example to different time frames, we get the following results. Note that these examples work for the most common approach to equities speculation: market-timing with a discretionary allocation towards individual stocks. For 2 years, instead of 5.5 years, the portion of the population with skill increased to 36%. This is because it is significantly less difficult to outperform monthly at the stated 1.2%, for less years. And hence we don’t need as many lucky investors in order to get the same overall portion of outperforms.

On the other end of the time spectrum, for 25 years and 50 years of speculation, the portion of speculators who can maintain the same level of statistical evidence of investment skills rapidly decreases to 0.76% and 0.02%, respectively. This is shown in blue, on the left axis of the chart below. 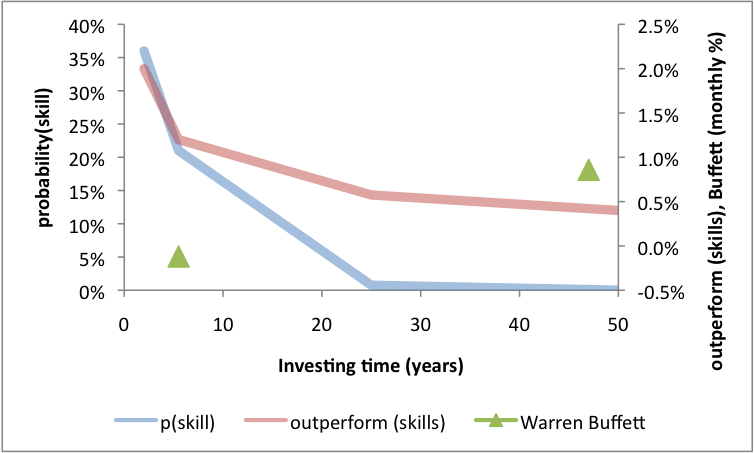 We also identify in green, the performance of an extraordinary investor, Warren Buffett. In 2001 Warren expressed in Berkshire Hathaway’s (BRK) Chairman’s Letter:

Investors should remember that excitement and expenses are their enemies. And if they insist on trying to time their participation in equities, they should try to be fearful when others are greedy and greedy when others are fearful.

This turned out to be even more sage advice in 2008-2009, then it was in 2000-2001. Yet despite his extraordinarily favorable private placements, which he was able to negotiate during the depths of the financial crisis, on a market price he barely underperformed during the past 5.5 years. Market price was used since BRK’s recent months of valuation accounting data is not yet available. We also see in this chart that he has significantly outperformed over his 45-plus year history, and doesn’t really need the skills-adjusted handicap we show for those investing for such a long period of time.

To clarify this previous point, we see in that chart above that having only a third, of the recent 5.5-year skilled monthly outperformance, is needed to correct for the precipitous drop in the odds of outperforming at that level for over 25 to 50 years. Conversely, a spike higher in monthly outperformance is needed, during a more brief investment period, to statistically perform the same as the nearly 21% of people have been capable of outperform with skill during the past 5.5 years.

The confidence interval here is tightest about the 5.5-year baseline analysis. And going forward in this analysis, we assume that there are roughly tens of millions of Americans who actively invest. Given this, the probability of investment skill would suggest roughly tens of thousands Americans in their 20s have this sort of investing experience any can feel comfortable that their recent gains may offer a chance for long-run continued outperformance. But otherwise nearly four out of every five of their peers, are already doomed in any pursuit of a 25 to 50 year statistical outperformance. Warren Buffett’s recent tumble isn’t a compelling counter-example for the wishful possibilities of the reverse: a miraculous, late-career revival.

Does this seem like a lot? Well to put this into some perspective, 99% of the top managing directors on Wall Street would have not outperformed with skill over this period.  With such daunting odds, what advice is there for people who dimly choose to speculate anyway, tying up large amounts of their human capital? There are five specific advice here to impart.

We close with a 1998 quote from Warren Buffett.  May the wisdom prove promising to those who still want to toil away, in pursuit of that magically elusive thing.

Success in investing doesn’t correlate with I.Q. once you’re above the level of 25. Once you have ordinary intelligence, what you need is the temperament to control the urges that get other people into trouble in investing.