As this is written three regional manufacturing PMIs have been flash estimated for January: euro area, U.S., and China. These three also represent the largest global economic weights by many measures, including the purchasing power parity measure. They also provide a wake-up call for the many number of people, who at the end of 2013 felt these economic growth risks weren’t before us (but they were: here, and here.)

China’s purchasing managers’ index (PMI) fell 0.9, to 49.6, where any level below 50 indicates contraction. However, this PMI drop by itself is not extraordinary.  During all of 2012 and 2013, China’s PMI average stagnated at this same contractionary 49.6 (and with a monthly typical deviation of a larger 1.3).

Less noticed, the U.S. had a relatively larger PMI drop of 1.3, to 53.7. This above 50 reading indicates there was still some steady expansion. For example, during 2012 and 2013, the U.S. PMI average was running about the same at 53.3 (but with a similar monthly typical deviation as the 1.3 drop). This shows among other things that the U.S. had fared better than China during the past two years, a time when China also experienced far greater volatility in their PMI measure versus what we just saw in its January reading.

We can look to multivariate analysis of other regional PMIs, in connection to the euro area, the U.S., and China. In doing so, we see that Brazil has tracked close to the joint confidence of the U.S. and China, and to a lesser degree to either country taken in isolation. See the dark dotted line on the chart below, which shows a somewhat expected drop in Brazil’s PMI, for January. 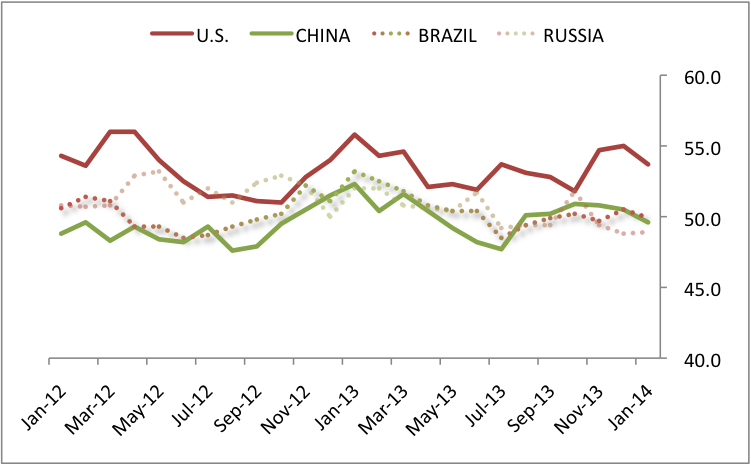 On the chart below we simply average both the monthly PMIs for the U.S. and China, and then we can better see how Brazil is as closely connected to the U.S., as much as it is to the other emerging market (EM) of China.  There is a weak connection of Russia’s PMI as well to the joint confidence of the U.S., and China, which we show here in the light dotted line. 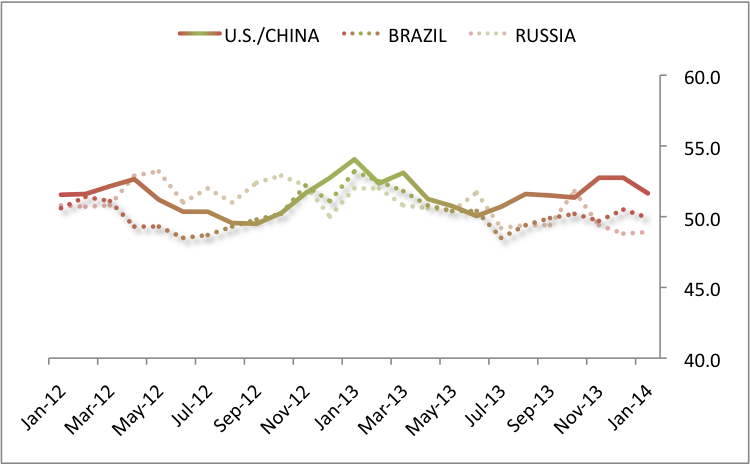 The average for Japan’s and the U.K.’s PMIs is shown on the dotted line of the chart below. As the January euro area’s PMI rose 1.2, to 53.9, we would also expect somewhat of a further expansionary reading in the January PMIs for Japan, and the U.K. This means that some large economic regions are expected to remain positively growing, despite the recent drop in China’s PMI. 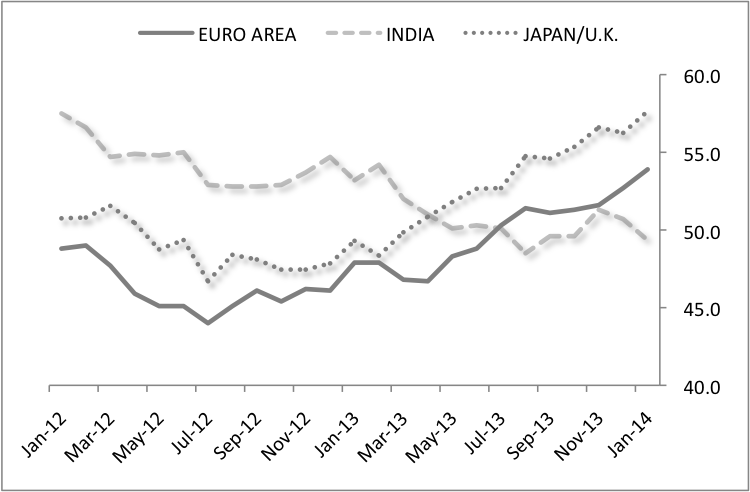 Another way to look at this is to allow for the computer machine to cluster country PMIs which influence other initial country PMI groups. We introduced some of these concepts in this note, and we can mathematically think of this topic as a broader covariance matrix algebra, where we consider the actual economic weights instead of the earlier factor regression weights. The influence of pairing combinations of regional PMIs together, incorporating the economic weight of the influential candidate region can be expressed through a partial derivative function of the combined regional PMIs. This would always show up in a mirror positions across the diagonal of the covariance matrix (see right bracket on the top formula line below).

In the first formula below, we re-express the partial derivative of the initial PMI regional variance.

And in the last formula above we rearrange the equality for the two leftmost initial partial derivative terms in the above formulae. So now what we have in this covariance result looks at all combinations of a set of regional PMIs, and any other influential candidate PMI(s) which is not already included. This covariance we are seeking is also equal to the correlation multiplied by deviations from each of the two regional groups. And to get to the beta ratio, we simply divide by the deviation of the initial PMI regions, and multiply out by the influential candidate PMI.

Now we know that we are looking at the covariance fit, so we still need to multiply by the proportional economic weights provided by the initial PMI regional groups and the influential candidate PMI set. Combined with the beta step above, this process allows us to take the partial derivative and scale it by the proportional economic weight of the candidate region PMI relative to the sensitivity of the initial PMI region. And what we are left with is a direction for grouping regional PMIs into fits, based on economic significance, in addition to mathematical fit.

This entire optimization process we discussed using economic weights, doesn’t lead to much additional insight versus the multivariate analysis above, but for India. For example the machine process cross-validates the joint influence historically that both the U.S. and China have had on the manufacturing confidence of Brazil. Concurrently, this algorithm solves to show that while the euro area’s PMI mathematically has a negative linear relationship with India’s PMI (also shown in the chart above), the latter is economically more connected to the changes in the U.S.’ PMI.

To summarize, the research here shows that the manufacturing PMI topic is more complicated than the simple analytical structure where either the EMs (or the U.S. in isolation) are just adversely risking other regional PMIs. Instead we see that the U.S. and China, together have interactive influence on other EMs. But the PMIs for other DMs are much more influenced by other factors similar to those which have contributed to the euro area’s PMI. Sure, we are in a position this year where two large January PMIs have suddenly contracted. But there are still economic limits -as we have shown- in the degree to which that would in any way negate the momentous trend that is underway in other regional PMIs (particularly in DMs).