One signal for whether the U.S. economy is ready for a more robust recovery is the extent to which the financial position of households has rebounded. Here are some illustrative figures, taken from the January 2014 issue of Economic Trends from the Cleveland Fed.

O. Emre Ergungor and Daniel Kolliner write about “Household Economic Conditions.” Here’s a figure showing the movements in household wealth since 2000. Household assets and net worth have now rebounded and surpassed their pre-recession highs. 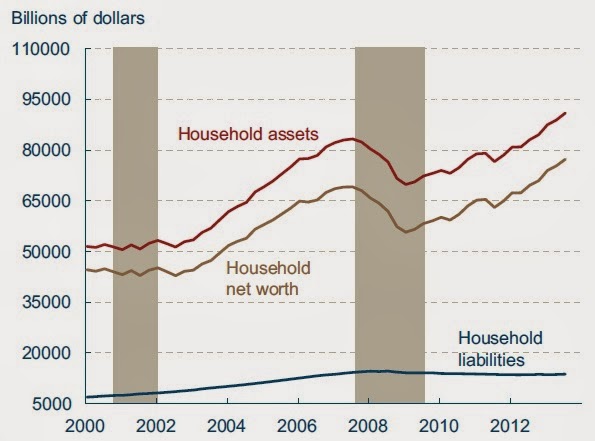 Part of what’s happening here is that households have trimmed back on many of their debts. This figure show the change in outstanding debt in various categories over the previous four quarters. During the housing bubble, for example, mortgage debt was growing at more than 10% per year. But household mortgage debt has been contracting (that is, negative growth) since about 2008. The authors write:

“Revolving consumer credit balances plummeted in 2008 and are currently barely higher than their level in the third quarter of 2012. Outstanding home mortgage debt is still contracting due to record write-off s and reduced demand for homes in previous years. Nonrevolving consumer credit, which consists of secured and unsecured credit for student loans, automobiles, durable goods, and other purposes, is the only credit category that shows some sign of life. It is currently 8.5 percent above year-ago levels. Note, however, that the student loan component is entirely driven by federal government loans to students and does not reflect private market activity.” 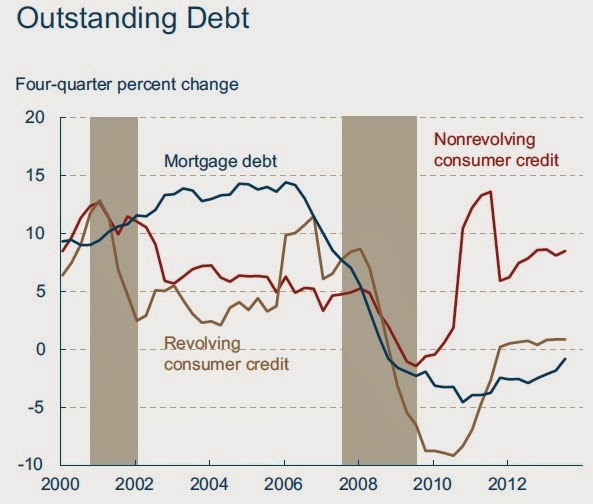 The combination of lower household debts and sustained low interest rates means that households are spending less on debt service. They write:

“The financial obligation ratio, which expresses household liabilities, such as credit card payments, mortgage payments, home property taxes, and rent payments, as a percentage of disposable income, is at its lowest level since the third quarter of 1981.” 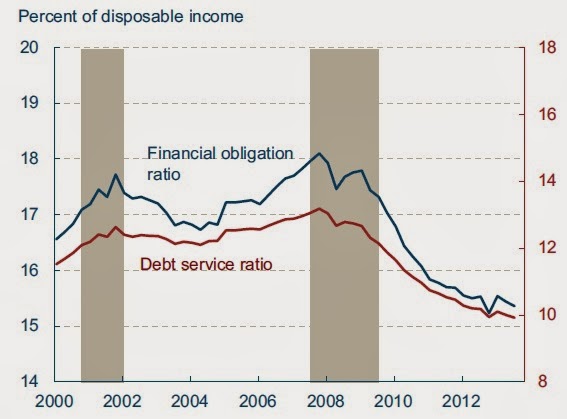 A result of these changes is that retail sales and consumption overall, if not yet back to healthy growth rates, are at least solidly back in positive growth after their nosedive during the Great Recession. 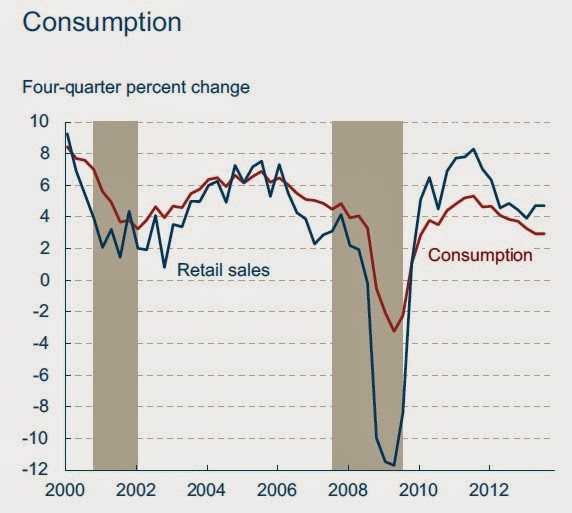 Of course, the unemployment rate remains high, as do the number of long-term unemployed and concerns over whether some workers are not being counted as unemployed because they have become too discouraged to look for work. But noting that the economy is improving is not to make the claim that it’s already a bright sunshiny day. One final pattern caught my eye in an article on “Employee Compensation Costs during the Recovery,” by Joel Elvery. He points out that the patterns of wages and of benefits have been diverging in recent years. 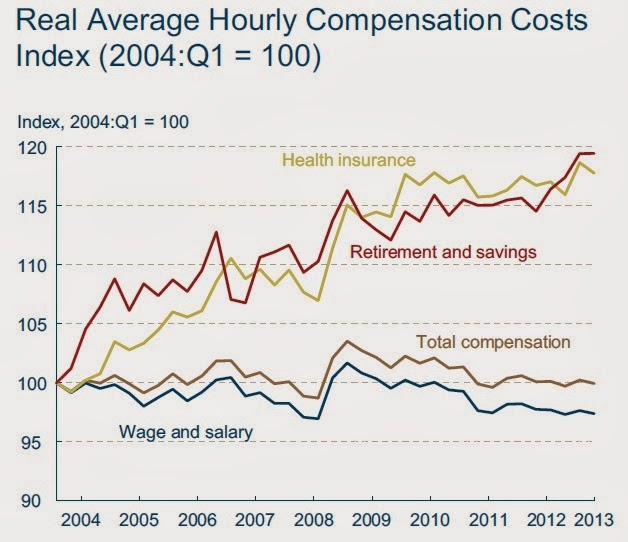 This figure needs to be interpreted with care, because hourly compensation costs are affected by which workers have jobs. Thus, the rise in wages and salary around 2008 is not because lots of workers saw a big raise, but instead because lower-paid workers were more likely to become unemployed, and so the average wage and salary for those with jobs was higher as a result. But the overall pattern here is clear enough. Over the last decade, wages and salaries have been pretty flat, but the costs to employers of benefits like retirement and savings accounts, as well as health insurance, have been rising. As I’ve written before on this blog, health care costs (along with other benefits) have been eating your pay raise.