Home Prices Are Rising. Is That Recovery, or a Bubble?

Home prices are still rising according to the latest NAR data showing a monthly gain of 1.3% and 9.9% year to year increase in December. That’s consistent with a wide variety of home price measures, including the real time index of listing prices reported by DepartmentofNumbers.com. That index has proven to accurately depict real time market conditions, later verified by the closed sales data which lags the contract date by at least 3 months. Case Shiller’s lag is even worse. Because of its extreme, and unnecessary, smoothing methodology, it has a built in lag of around 5 1/2 months.

The NAR’s data for December represents contracts done in October and November, leaving us to wonder exactly where the market is now. The uptick in listing prices suggests that it is still trending upward. That’s not the only evidence, however, 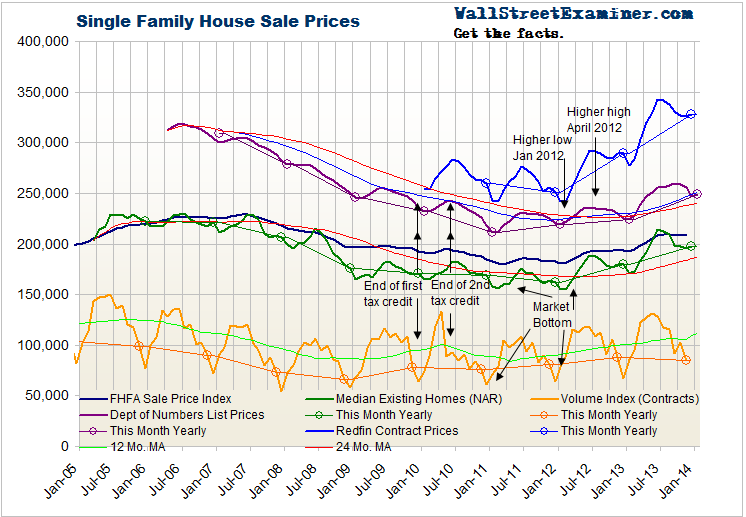 Redfin.com, an online real estate brokerage, reports real time contract prices for the previous month from the 19 large metros in which it has offices. That data is released about 3 weeks after the close of the current month. As with the other indicators it shows a seasonal decline in the second half of 2013. The markets in which it operates are highly desirable metros on both the East and West Coasts, with a few hot heartland markets also included. If there are bubbles, it will show up in their price indicator first, and more than in the broader market measures like the NAR’s. The blue line in the chart above depicts the Redfin index. It’s pretty clear from that, that local bubbles are raging in desirable markets. Redfin shows the median price in the markets in which it operates has risen 13% in the past year on top of a 16% gain in 2012. The month to month gain in contract prices in December was 0.8%. It shows year to year gains of 20% or more in 2013 in 7 markets in December, of which 5 were in California. The other two were Phoenix and Las Vegas. Sound familiar?

Home Prices Rising Do Not Equate With Recovery

But does that mean that the housing market is “recovering” as widely touted by Fed mouthpieces and its Wall Street and media handmaidens? The answer is emphatically no. Existing home sales volume has rebounded to about half the peak levels of 2005. That’s so so. The reason prices are rising across the board is because the inventory crunch is persisting. There is a severe shortage of houses for sale in the most desirable markets. 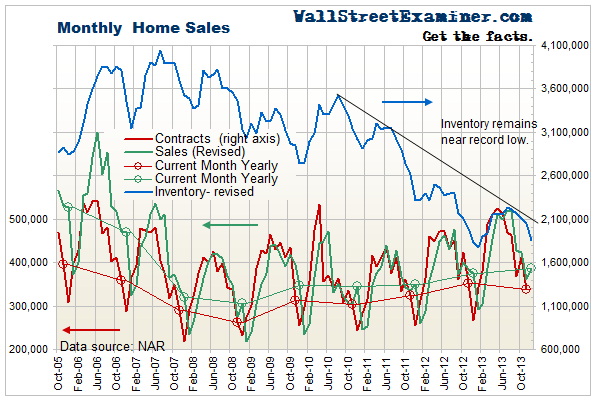 The idea that the housing “recovery” is contributing to economic growth is phony. The implication in all the pronouncements that housing is recovering is that home construction is rising. The fact is that new home construction has only had a dead cat bounce. It’s barely off the lows seen at the bottom of the housing crash in 2008 and 2009. The Commerce Department will release new home price, sales volume, and inventory data for December on Monday. It will again show that there is no recovery in the single family housing development industry. Multifamily bounced back in 2013, but there’s some question whether that can be sustained. Check back here Monday for an update.

What does this have to do with stock prices? Not much. The Fed pumps liquidity into the system via the Primary Dealers, so that the first place, and virtually the only place, the effects are seen is in the financial markets. The indirect flows to the economy are constricted by the fact that an increasing number of Americans can’t find good paying jobs, or in too many cases, any job at all. The top 10% of the population which owns virtually all of the stocks benefit. Thanks to the Fed’s policies of ZIRP and QE which benefit mostly broker dealers, bankers, and speculators, everybody else struggles. That’s what prevents a real recovery in the housing market.

Follow my reports on how the Fed and other central banks pump liquidity into the markets weekly in the Wall Street Examiner Professional Edition. The next Treasury market update will be posted Saturday morning, January, 25.