The retail sales headline number for December rose 0.2%, beating the market consensus of a flat month. As usual, the featured number was a seasonally adjusted, made up number, also not adjusted for inflation. The mainstream media noted the solid gain, but worried about the inventory buildup. However, the actual numbers, not seasonally finagled, the revealed that December was actually a subpar month.

I looked at the not seasonally adjusted actual sales, then adjusted for inflation and also excluded gas sales because gas sales act as a counterweight based on gas price changes. Gas prices are volatile and sometimes have a small, but misleading effect on total sales. When gas prices rise it adds to nominal retail sales but people often buy less of it along with buying less of everything else, making the rise in sales misleading. When gas prices fall, it looks like a fall in retail sales when the price drop actually stimulates other retail spending because it puts money back in consumers’ pockets. 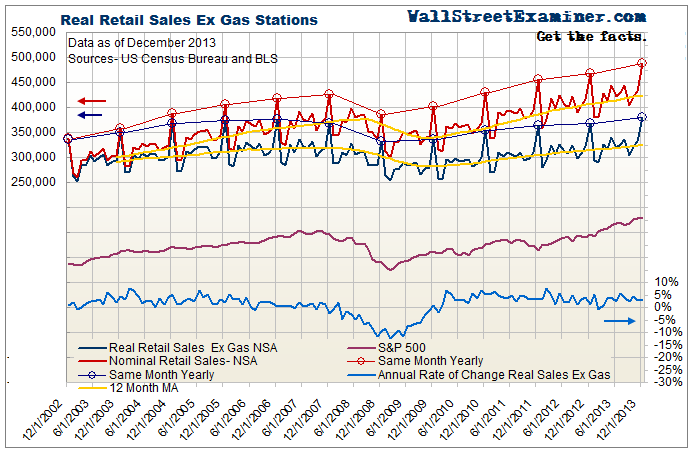 Nominal retail sales, not adjusted for inflation, rose 4.3% year to year. That was in line with the average 4.2% annual gain over the past 12 months. However, the month to month rise of 13.2% was below average for December. The average December gain over the previous 10 years was 16.3%.

Real retail sales ex gasoline were up just 2.8%. The top 10% of the income spectrum and foreign shopping tourists continue to boost those numbers to well above the income gains for the bulk of US consumers. In spite of that, the year to year gain was below the average yearly gain of 3% for the prior 12 months. The month to month gain of 14.4% was well below average for December. The 10 year average December increase was 18.2%.

Once again the headline number made things look better than they really were. December retail sales were actually below average. Perhaps the December weather can be blamed. We’ll need to see if sales bounce back when the weather improves.

Stay up to date with the machinations of the Fed, Treasury, Primary Dealers and foreign central banks in the US market, along with regular updates of the US housing market, in the Fed Report in the Professional Edition, Money Liquidity, and Real Estate Package. Try it risk free for 30 days. Don’t miss another day. Get the research and analysis you need to understand these critical forces. Be prepared. Stay ahead of the herd. Click this link and begin your risk free trial NOW! [I cover the technical side of the market in the Professional Edition Daily Market Updates.] http://youtu.be/PQsf3OGET3U I tell CNBC Africa’s Lindsay Williams why I think the market will continue higher in 2014 on his nightly radio show on South Africa’s Fine Business Radio.