I have previously shown how the headline number for non farm payrolls overstated the weakness in December jobs growth. That was about how the pundits and the media are often misled by their slavish devotion to seasonally adjusted data. The point was about short term market misdirection. Sometimes the short term data reasonably reflects the trend, even though it is fictitious. But other times it doesn’t, and it’s impossible to know the difference if you don’t at least also look at the actual, not seasonally adjusted data, which I do. And I figure, if you know the direction of the actual data, why bother with the seasonally adjusted crap?

But that’s another story, and not the whole story.

The big picture employment trend remains a disaster for the American people. Below are a few charts to illustrate. I won’t bore you with all the numbers, just enough to tell the story along with the pictures. This data is from the BLS Household Survey, from which the unemployment rates are derived. The Non Farm Payrolls data is from the Establishment Survey. I believe that survey overstates the number of people actually employed because it counts each job, not each job holder. Some people hold two or more jobs. First let’s look at total employment and full time employment, and the percentage of Americans holding full time jobs. 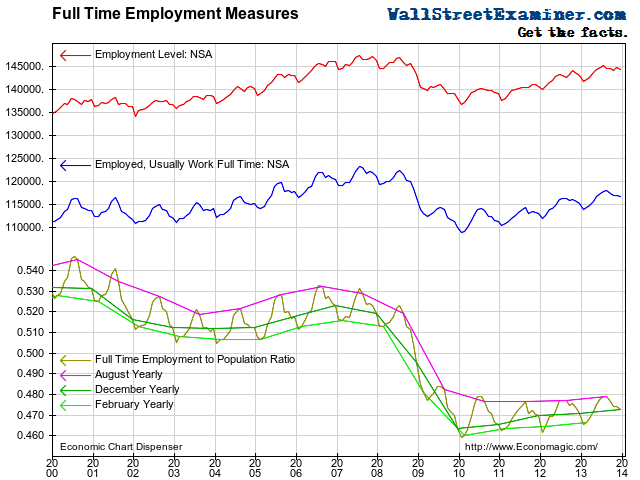 The percentage of Americans holding full time jobs has barely budged since the bottom of the recession and the rate of improvement has actually slowed since 2011. This is not a cyclical phenomenon. This ratio has been trending lower since 2000. While Wall Street and the fortunate 20% of the American people who own 92% of the stocks outstanding gorged on manna from the Fed in 2013, the growth rate in the number of full time employed people actually fell from around 2.5% annually to less than 1.5% annually. Not only has the Fed pumping up stock prices led to no trickle down, in fact, the opposite has occurred. Cheap money has encouraged speculation, stock buybacks, malinvestment, and overinvestment in technologies and capacity that eliminate jobs and reduce the value of human labor in the marketplace. 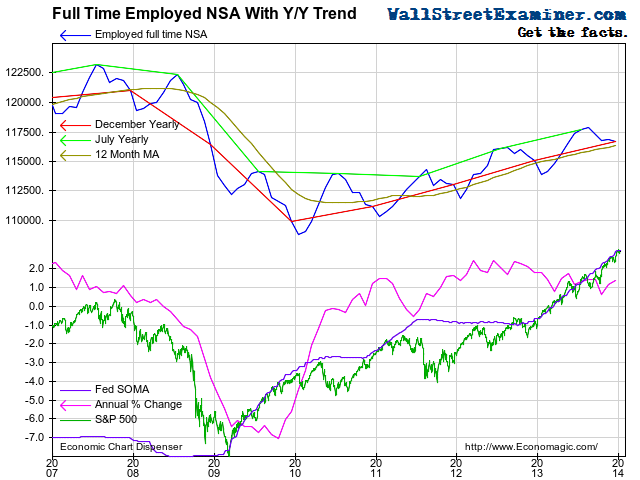 As Wall Street banksters and corporate syndicate bosses have gotten fatter on the Fed’s QE 3-4 diet, hourly wage rate gains for American workers actually got thinner in 2013, dropping from an annual average rate of near 2.1% to 1.9%. That’s more evidence that more QE is not only not helping, but is actually promoting the destruction of the American wage earner. [Note: The year to year drop in December is an artifact of the January 2013 tax rate increase as some employers accelerated January wage, salary, and bonus payments to December 2012 to beat the tax increase.] 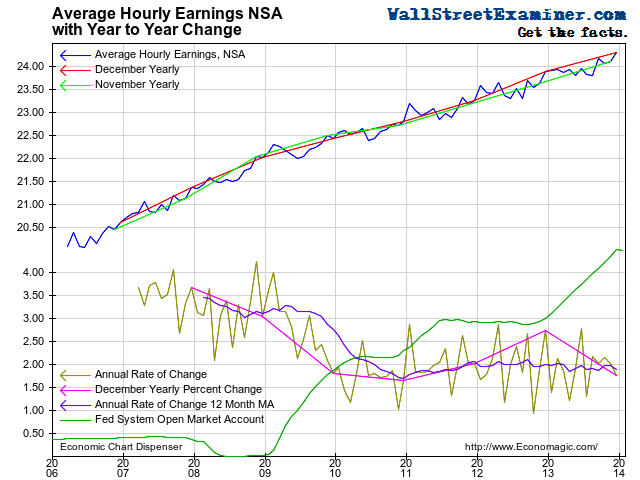 Holding employment and wage gains to the bare minimum is good for corporate profits and executive compensation in the short run, but as the trend goes on, ultimately it will render the US little more than a feudal state run by and for the benefit of a few plutocrats while the majority is reduced to peonage. As this trend continues and the purchasing power of Americans declines, what will happen to corporate revenues and profits? Will the developing world’s gains make up for American’s losses. We can only hope that something happens to reverse this trend, or our descendants face a bleak future in the US. Stay up to date with the machinations of the Fed, Treasury, Primary Dealers and foreign central banks in the US market, along with regular updates of the US housing market, in the Fed Report in the Professional Edition, Money Liquidity, and Real Estate Package. Try it risk free for 30 days. Don’t miss another day. Get the research and analysis you need to understand these critical forces. Be prepared. Stay ahead of the herd. Click this link and begin your risk free trial NOW! [I cover the technical side of the market in the Professional Edition Daily Market Updates.] http://youtu.be/PQsf3OGET3U I tell CNBC Africa’s Lindsay Williams why I think the market will continue higher in 2014 on his nightly radio show on South Africa’s Fine Business Radio.