After the ISM’s manufacturing new orders for December showed some life last week we had reason to expect a good report from the Non Manufacturing (services) sector. It didn’t happen.

New orders for the services sector fell sharply. On an actual, not seasonally adjusted basis, the new orders survey was down a whopping 10 points year to year to 50.4. It was also a drop of 6.4 points from the November reading. That’s unheard of. December is almost always an up month. The previous worst December drop in the previous 10 years was -1.8 in December 2009, in the pits of the economic collapse.

Data for the services sector is released a few days after the Manufacturing index each month. The actual reading for new orders in the manufacturing sector for December was 64, which was a huge jump over the year ago period. Such a gigantic divergence between Manufacturing and Non Manufacturing orders is unheard of.

The manufacturing sector accounts for around 11% of the US economy. The services sector is everything else other than government, mining, and agriculture. The services index has been declining since a strong reading in September, with the 3 month decline culminating in collapse in December. The new orders component of the Non Manufacturing index normally moves in the same direction as the manufacturing indicator, but with much less volatility. That was not the case this month. 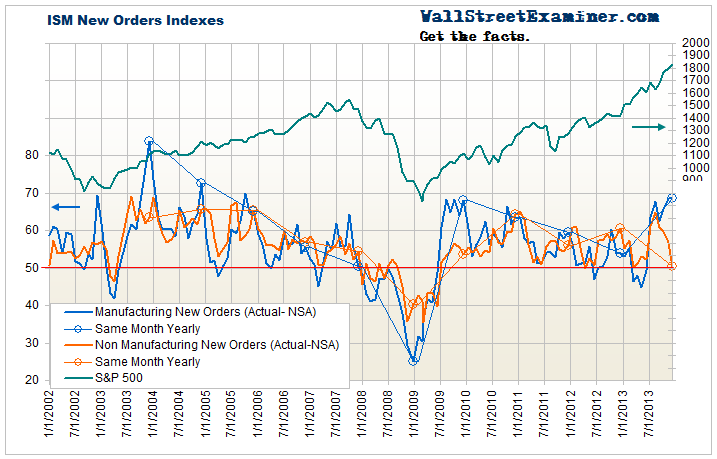 The headline number for the seasonally adjusted Non Manufacturing composite index, which is a Colonel Sanders chicken pot pie of 11 different measures, was 53, down from 53.9 in November. That disappointed the crowd. Economists’ consensus expectation was for a 54.6 reading. The Wall Street Journal reported the bad news but dutifully noted that many economists blamed the weather and the holidays.

What? Wait! We’ve never had holidays and cold weather in December before? An economist who blames the December weather and holidays for the poor performance gets the economist clown fraud medal of honor.

Other economists thought the report was ok, “not alarming.” In other words, “Nothing to see here, move along.” Bloomberg’s take was that the economic expansion is uneven, coming in “fits and starts.” They may be right, but if there’s no rebound in January, the actual New Orders index will go negative. It has rebounded from around this level 3 times previously in this “recovery.” A failure to do so now would indicate an ill wind blowing for the largest part of the US economy.

[iframe width=”560″ height=”315″ src=”//www.youtube.com/embed/PQsf3OGET3U” frameborder=”0″ allowfullscreen]
Stay up to date with the machinations of the Fed, Treasury, Primary Dealers and foreign central banks in the US market, along with regular updates of the US housing market, in the Fed Report in the Professional Edition, Money Liquidity, and Real Estate Package. Try it risk free for 30 days. Don’t miss another day. Get the research and analysis you need to understand these critical forces. Be prepared. Stay ahead of the herd. Click this link and begin your risk free trial NOW! [I cover the technical side of the market in the Professional Edition Daily Market Updates.]