A week ago Thursday, the Commerce Department reported the widely ignored monthly Construction Spending report for November.  Did you notice it?  I didn’t think so.  But boy, was The Wall Street Journal having an orgasm or what!

“U.S. construction spending rose to its highest level in nearly five years in November, the latest indication the economic recovery gained momentum in the final months of 2013, ” wrote reporter Jonathan (Takin’ It To The) House.

“Private spending on residential construction rose 1.9% in November to $345.53 billion, the highest level since June, 2008.”

Rumor has it that he left a stain on the blue dress.

So I had a look at the data, in real terms adjusted for inflation. To make the adjustment from nominal to real, I divided the nominal numbers by the Producer Price Index for Construction. As for that “highest level in nearly five years,” …eh, not so much. 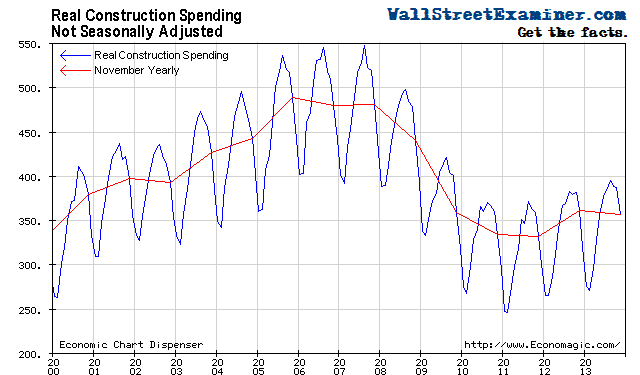 November, as always, was down, which isn’t news.  Real construction spending, actual, not seasonally adjusted, fell by 7.9% in November. That was worse than all of the past 3 Novembers, which were down 5% to 7%. It was worse than the 10 year average for November of -6.8%. In fact, the only years that were worse in the past 10 were 2008 and 2009, at the bottom of the housing crash.

But here’s the kicker. It was down 1.5% year to year and in real terms was only slightly above the levels seen at the recent lows, and not even back to the level seen at the bottom of the 2002 recession. It was the first year to year decline since November 2011. Every month since has seen a year to year advance, but the annual growth rate peaked in November 2012 and has been declining ever since before turning negative in November.

What does slowing that correlate with? That’s right, the rise in mortgage rates. Construction loans are typically structured around a longer term interest rate. Bond yields matter. It’s not hard to imagine what will happen to construction if bond yields continue to rise.

The mainstream media and their hired hand reporters publishes grossly misleading stories, apparently without any regard for the underlying facts. That requires a certain level of sociopathy which most of the public, sadly, seems to accept. My job is to get the facts. To have any chance at understanding our environment we need to stop believing the constant diet of lies the media feeds us, and understand the reality.

[iframe width=”560″ height=”315″ src=”//www.youtube.com/embed/PQsf3OGET3U” frameborder=”0″ allowfullscreen]
Stay up to date with the machinations of the Fed, Treasury, Primary Dealers and foreign central banks in the US market, along with regular updates of the US housing market, in the Fed Report in the Professional Edition, Money Liquidity, and Real Estate Package. Try it risk free for 30 days. Don’t miss another day. Get the research and analysis you need to understand these critical forces. Be prepared. Stay ahead of the herd. Click this link and begin your risk free trial NOW! [I cover the technical side of the market in the Professional Edition Daily Market Updates.]