The headline Producer Price Index for November was down 0.1%, in line with the consensus guess of economists.

What’s going on? Aren’t QE and ZIRP supposed to be inflationary? Isn’t the Fed shooting for 2% inflation? Yes, but wait! The Fed has been doing QE and ZIRP (Zero Interest Rate Policy) for nearly 5 years and for the past year and a half, there’s been no “inflation.” Zero. Zilch. Nada. And Japan has been doing some form of QE and ZIRP for over 20 years, and they’ve been stuck with deflation the whole time.

Get the picture? QE and ZIRP are deflationary. Apparently, central bankers don’t get it because it’s against their religion-the mystical belief that their policy of printing money and holding interest rates at zero will stimulate inflation if they just do it for long enough. There’s no basis for it in fact, but they go on believing. Faith is a critical element of central banking. Central banking represents all of the world’s great religions-Christianity, Islam, Buddhism, Shintoism, Judaism, Zoroastrianism, Witchcraft, Devil Worship, and Economics, the last three especially so. 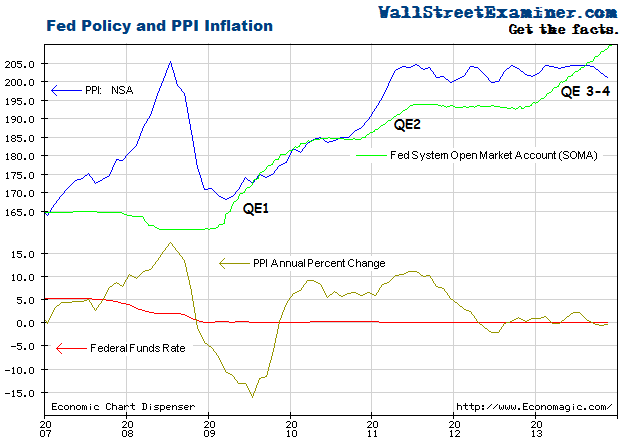 The Fed started ZIRP in late 2008 and began printing money had over fist with QE1 in early 2009. Producer prices had collapsed in 2008 after the commodity bubble blow-off earlier in 2008 that was an echo of the housing and credit bubble that grew out of years of easy central bank policy and lax regulation. We know how that ended. After the Fed cut rates to zero on the heels of the 2008 crash and started printing money, prices rebounded through QE 1 and 2, but only to their previous level. But look what happened with QE3 and 4 which began late in 2012. No inflation.

Here’s the problem. Money printing and ZIRP are great for asset inflation-bubbles, if you will. But economists do not count asset inflation as inflation. That’s right. Asset prices don’t count. Even though the link between money printing and asset inflation is clear, direct, and incontrovertible, economists and central bankers, being the mystical jackass charlatan frauds that they are, simply DO NOT count it. They even manage to ignore house price inflation by using something called “owner’s equivalent rent” in the CPI, as opposed to actual house prices, which have been rising at about 15% a year for the past year.

ZIRP and QE, as opposed to stimulating inflation as the economists define it, actually suppresses it. QE and ZIRP cause overpricing of assets, malinvestment, and as a result, excess capacity in many sectors of the economy. That contributes directly to the suppression of labor rates. Capital becomes overvalued because there’s too much cash for speculators to play with, while labor income is under constant downward pressure because the plutocrats make more money from speculation than from production. The incentive is to invest in processes and structure that eliminate troublesome labor. The purchasing power of labor declines. Workers’ standard of living and ability to purchase goods and services declines. Because of overcapacity, excess production, and falling real personal income for the majority, the prices of many goods and services remain under downward pressure. They are typically mostly the goods counted in the PPI and CPI.

This creates a vicious cycle. The price indexes that economists watch remain under downward pressure. In their religious delusions, the central bankers and their economic disciples spread the doctrine that we only must print more money for longer and keep interest rates lower for longer, maybe even turn them negative, to get those inflation numbers up. But it does not work. 5 years of US policy and over 20 years in Japan have provided overwhelming evidence that it does not work. In spite of that the central bankers and economists go right on ignoring it. They continue their policies of robbing from the middle class, stealing their savings and devaluing their work, to give the spoils to the plutocrats and speculators. They get richer and the rest of the population sinks ever further into an economic abyss.
[iframe width=”560″ height=”315″ src=”//www.youtube.com/embed/PQsf3OGET3U” frameborder=”0″ allowfullscreen]
Stay up to date with the machinations of the Fed, Treasury, Primary Dealers and foreign central banks in the US market, along with regular updates of the US housing market, in the Fed Report in the Professional Edition, Money Liquidity, and Real Estate Package. Try it risk free for 30 days. Don’t miss another day. Get the research and analysis you need to understand these critical forces. Be prepared. Stay ahead of the herd. Click this link and begin your risk free trial NOW! [I cover the technical side of the market in the Professional Edition Daily Market Updates.]

One reply on “ZIRP and QE are Deflationary”