First time unemployment claims had their worst performance last week since 2009. Actual, not seasonally adjusted claims were up 7.5% versus the same week last year. That’s outside the normal range. Is it a calendar anomaly? Even though the seasonally adjusted headline number was worse than the consensus expectation, the pundits were sanguine. I’m not so sure they should be, but we won’t know for a few weeks. If this sticks, it’s a clear break of the nearly 5 year trend of improvement, a sudden sign of economic weakness.

Withholding tax collections, which are reported in real time, and which I cover in the weekly Professional Edition Treasury updates, were below trend that week, and the trend has been weakening. The economy may be slowing just when virtually everyone expects the Fed to taper.

If this weaker data sticks, it’s an ugly omen versus bubbly stock prices. 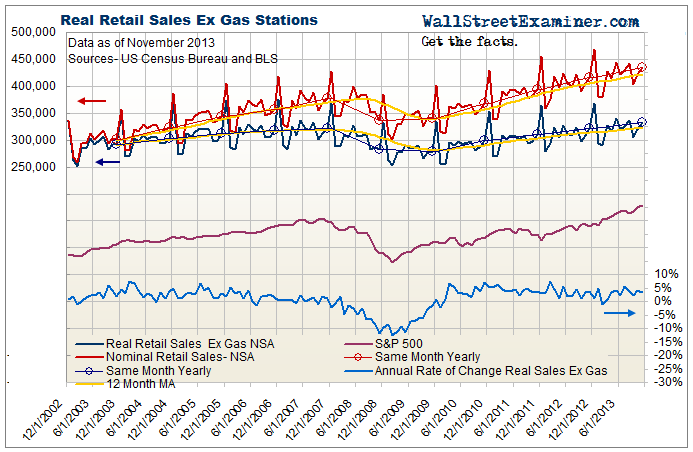 While the nominal retail sales have been surging to new highs since 2010, actual unit volume, excluding gasoline, just began to exceed 2007 levels in recent months. This is in spite of the fact that US population is 6% higher now than in 2007. Real sales per capita remain at 1998 levels, well below the peak level of 2003-2007. It’s no secret that while the top 7% are doing well, the vast majority of Americans are worse off and are spending less than they were a dozen years ago.

I’ll post a chart of this data for November next week after official CPI data is posted. Stay tuned for that.

Also out this week was the Job

Openings and Labor Turnover Survey (JOLTS) for October, reported to be a favorite of Janet Yellen. Job openings for that month were up 7.9% versus October 2012, virtually unchanged from the September gain, and slightly better than the growth rate earlier in the year. But its much slower growth than in 2012. The growth rate of job openings actually slowed when the Fed started QE 3 and 4 in November of last year. So much for QE helping the economy. But it helped stock prices go into bubble mode. 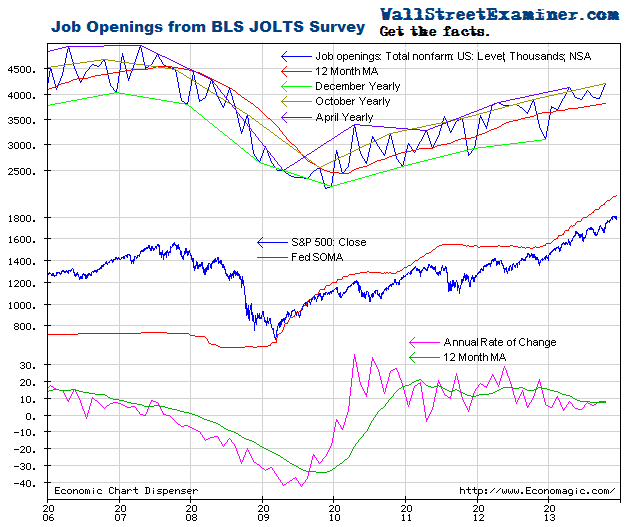 Job Openings Versus QE and Stock Prices- Click to enlarge