The U.S. household labor data shows an economy that has morphed dramatically in the past decade, therefore interpreting the headline monthly labor data not a simple matter. Jobs are being added. But the labor force is shrinking. People are retiring. But retirement is partly due to lack of opportunities. With one person’s retirement, a younger person in the work force gets a chance to advance their career. These different economic dynamics alternate between positive, negative, positive, negative, positive, and so forth. But with the quick drop in unemployment down to 7%, are we at last just a few months away from declaring this recovery complete? In this analysis we step beneath the headline numbers and show the general direction of things, particularly how the ongoing drop in the labor force is very much distorting our impression of the headline numbers.

The volatility in the month-to-month data, including massive revisions and reclassifications, and distortions from other effects such as from a temporary government shutdown, all add complexity in interpreting the data. And in the past decade we also have data that incorporates the economic turmoil from the financial crisis havoc.

Let’s see the illustration below, of the the past 10 years of employment and the labor force (i.e., participation rate), both relative to the population. From a decade ago, employment has fallen 3.7%, from 62.3%, while the labor force has fallen 3.1%, from 66.1%. This is not a recovery to anyone represented by the collapse of these metrics. 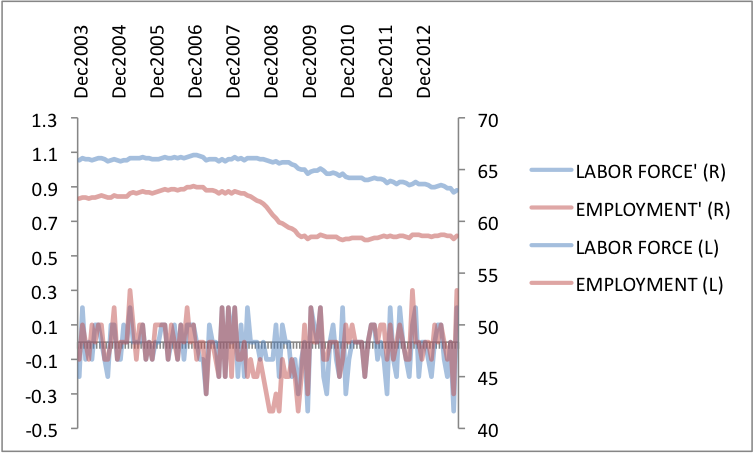 Now look at this equation below:

A monthly hundreds of thousands drop in unemployed is great if employment is rising, but not as great if it’s because the labor force is decreasing. The above illustration should make it very clear which of the two has been a stronger influence in recent years. But just to detail it out more, on the lower part of this illustration, we show what the monthly change looks like for this employment and the labor force data (see left axis). We separate this 120 month period into 3 partitions: 60 months through November 2008, 13 months through December 2009, and 47 months through November 2013.

Now in the illustration below, we simply summarize the average monthly change data above, for employment and the labor force, during these three distinct periods. Employment is only growing a paltry 0.01% in the recent 47 months. This does barely anything against the oceanic 0.24% monthly drop in the same, in the 13 months before it. The unemployment-to-population ratio (i.e., the gap between employment and labor force), and even border measures of underemployment such as the U-6, have been aided by the massive labor force drop that has started to occur- even as this drop suddenly only occurred after a drop in employment. And in the past 47 months this 0.03% monthly rate of collapse in the labor force is 3 times larger than the 0.01% monthly rate of growth in employment! Over the past 5 years (60 months), the 2.9% (-0.10%*13-0.03%*47) drop in the labor force nearly matches the 2.8% (-.24%*13+0.01%*47) drop in the employment.

The problem here, as we can see in the top illustration above, is that the first 5 years were also weak and saw an employment drop of 0.9% (-0.02%*60). This 60 month period absorbed not just 2003, which was an initial year of an economic growth period, but also the start of the financial crisis, and the period goes on through November 2008. So as a result over the entire 10 years (120 months), we still noted that employment has dropped 0.6% more so than the labor force (i.e., -3.7% versus -3.1%). Even as this has aided in lowering the unemployment rate, it is clear that there is a lot of ground still to make up, particularly with replenishing for the youth, the lost jobs from the labor force in the past decade. And this difference in the employment rate of change (0.01%) versus the labor force rate of change (-0.03%) of the past 47 months, implies that in an additional 15 months employment will not be anywhere near the highs we saw of the past 10 years, but it will be just enough time for the labor force to just collapse further and narrow the 0.6% differential it has with the drop in employment.

The bottom line is that while we may get excited to see U.S. labor statistics showing monthly job gains and an unemployment rate slide, there are three things to keep in mind. The first is that these hundreds of thousands of monthly job gains barely keeps up with growth changes in the population, the second is that gains are in non-core fields (see note here), and the third is that it is also catastrophically clear from the aggregate data above that the economy is just too weak to offer the robust career opportunities that an even larger U.S. population needs. So this recovery is far from fait accompli, despite the progress we’ve seen; there is still a tough grind forward.