How many times have you heard the phrase that “correlation does not imply causation?” NEWS FLASH! Correlation may not prove causation, but it can certainly imply it. And no matter that the clueless masses may repeat that phrase until they turn blue and lose consciousness, the fact is that sometimes the correlations we see are because they do represent cause and effect. Yes, it really does happen.

Vince Foster wrote a piece over at Minyanville today in which he argues:

…there is no empirical evidence that can prove Fed purchases reduce long-term interest rates or raise risk asset prices. There is only correlation. The Fed is buying bonds and bond yields are falling, therefore the Fed’s purchases of bonds is lowering bond yields. The Fed is buying bonds and stock prices are rising, therefore the Fed’s bond buying is raising stock prices. But correlation does not imply causation.

Foster is wrong. In this case, 12 years of observable data show direct correlation both short term, intermediate term and long term. In my view, that is enough circumstantial evidence for a guilty verdict in a court of law. It proves causation beyond a reasonable doubt. It strikes me as unreasonable to look at a weekly chart of those correlations and conclude that there’s no evidence of causation. In fact it seems more than unreasonable. It’s absurd. 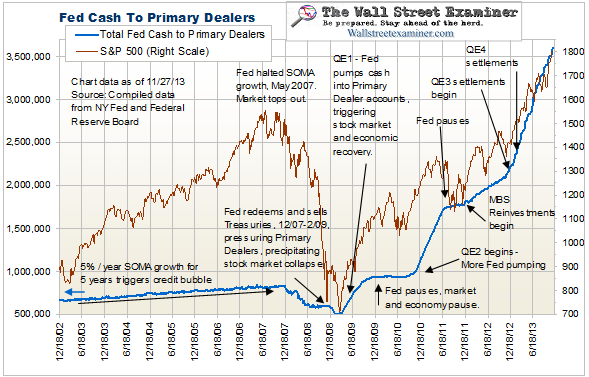 It is true that the Fed’s buying did not lower long term interest rates. The ECB’s programs did, however. The evidence for that is also overwhelming. Whenever the European crisis worsened, the ECB printed money and some of those funds were immediately deployed by the recipient banks to purchase Treasuries, driving their prices up and yields down. Whenever the European crisis subsided, and particularly since the ECB allowed repayment of LTRO funds beginning in December 2012, the carry trade was unwound and US Treasury securities prices fell. 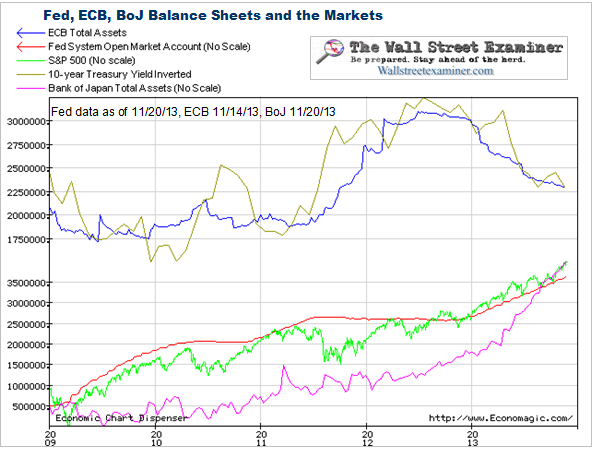 Fed, ECB and BoJ Balance Sheets and US Markets – Click to enlarge

Foster ignores the most basic and fundamental facts of monetary policy transmission. The first step in executing policy is a trade between the Fed (or other central bank) and a Primary Dealer. Since early 2009 that trade has been intermittently massive and unprecedented in one direction, a purchase which cashes out the Primary Dealer.

Foster also ignores the basic fact that the Fed is not acting alone. All of the world’s major central banks are expressing policy through the same institutions as the Fed is. They conduct trades with the world’s largest bank trading firms, mostly the Primary Dealers. The combined effects of these actions is to pump trillions into the financial system through the market, much of it through the US stock market.

The most important trade to the markets is not that initial trade between the central bank and the dealer, but the trade that follows it. The Second Trade is between the Primary Dealer and a counterparty, which could literally be anybody. That trade is completely at the discretion of the dealer. It’s their cash. They decide what to trade, where to trade it, and how much of it to trade. It is clear from the data of the past 12 years that equities have been a favored venue. The Second Trade is the acquisition of sufficient additional inventory to create a markup for subsequent distribution.

Foster ignores the fact that the business of the dealer is to acquire, mark up and distribute securities (or derivatives) to customers. The Fed’s (and BoJ’s) act of massively cashing them out, day in and day out, facilitates that activity. Constant injections of cash facilitate demand. If the cash driven demand for securities exceeds supply, prices rise. Eventually, supply will increase to meet demand and prices may stabilize or fall (cit., R. Duke, 1983). That has not happened yet. The Fed is still pumping enough cash into Primary Dealer trading accounts to keep prices rising.

Are there psychological knock on effects? Sure. Trends feed on themselves. But the effect of the Second Trade is direct, immediate, massive and clearly apparent if you bother to open your eyes and track the data. Meanwhile Foster, like most Wall Street analysts, focuses on all sorts of tangential and irrelevant second and third order effects of monetary policy. These effects occur AFTER The Second Trade. They are significantly less important to setting the price in the market than those Second Trades that come soon after the Fed’s injection of cash. They determine the trend. Everything else follows.

The ignorance of the Wall Street cognoscenti on these most simple, obvious, and critical facts is fascinating. It’s willful denial by people who should know better. Why choose to deny the most obvious cause of rising stock prices? Occam’s Razor says the simplest explanation is the most likely explanation.

If you choose not to be willfully ignorant, you can directly follow these transactions and their effect, as I have done and reported since the Fed started publishing the daily data on its operations in 2002. Then decide for yourself whether they are causal or not. If you choose not to do that, then you’ll never know, and you’ll be influenced by the cascade of misinformation pouring out of Wall Street day in and day out.