In a May 2013 testimony to the Joint Economic Council, Federal Reserve Chairman Bernanke stated that the FOMC has made it clear,

“it is prepared to increase or reduce the pace of its asset purchases to ensure that the stance of monetary policy remains appropriate as the outlook for the labor market or inflation changes.”

Alongside additional answers he offered concerning the rationale and timing of such tapering, the financial markets immediately swooned. Through June, the 10-year Treasury yield jumped nearly 60bps (and it would go on to rise an additional 40bps after that). Different 30-year mortgage rates also jumped 100bps (or 1%) in total. The stock market fell nearly 7%.

A number of Federal Reserve officials had immediately and ever since come out to distort and negate some of the Chairman’s communications, in an attempt to reduce the apparent runaway rise in borrowing costs, particularly on shorter-tenured bonds. The 10-year Treasury yield is now hovering near 2.7%, and the stock market has rallied nearly 15% since its bottom in June. Some are now openly (and some are now quietly) questioning to what degree financial markets are benefiting solely as a result of continued Federal Reserve actions, from the avoidance of reduced asset purchases (i.e., tapering), through Janet Yellen’s insistence that unconventional policy is needed for some time.

In this note we look at this performance, since June. And we show the impact that the Federal Reserve’s policy has contributed to this turn-around in the market sentiment that had soured by June, relative to the normal market behavior we could have expected. Surely there are other hypotheses we could add for the unusual take-off in the equity markets, from the labor markets improving, to inflation remaining low, to valuations coming in-line with historical norms. But we also do know that growth, revenue, and earnings, have all just been ok throughout the year. Five of these factors (employment, inflation, growth, revenue, and earnings) at their slow, single-digit annualized rate of growth do not support such a large ongoing rise in equity markets. And the sixth other factor (valuations) is not a good reason at all but rather an reverse-engineered excuse to make the sudden rise in equity prices seem ok. Thus it makes sense that the Federal Reserve has had an outsized role in changing the trajectory of market performance, since June.

November 15 is 1.5 quarters, or 4.5 months since June, a period we will call “Post”. The Post period this year has been 138 calendar days, and 98 trading days. The 4.5 months, through June, we will call “Pre”. Starting in mid-February, the Pre period this year has also been 138 calendar days, but 95 trading days. By a range of statistical tests (both parametric such as the the test for differences in means and in variance, and semi-parametric such as the Anderson-Darling or Kolmogorov-Smirnov), the Post period has performed better, but not in a statistically significant way.

For example, the average daily performance of the S&P 500 in the Pre period was 0.06%, while in the Post period it was 0.12%. An outperformance that could have been expected about 40% of the time by random chance alone. Also the ratio of the volatility (i.e., standard deviation) in the Pre/Post period was 1.3, which is a current statistically significant risk reduction at the 99% level.

But the one thing that these above statistics leave out is that there are inherent seasonal biases in the financial markets, so what we really want to do is look at the difference in Pre versus Post performance without the seasonal bias. This way we are truly isolating just the effects of the extraordinary government intervention. Here we look at each day in the Pre and Post period, but instead just look at its performance relative to that day’s typical S&P 500 performance, from 1970 through 2008. We have seen in the years since 2008 that government intervention (most notably TARP and ARRA) has distorted seasonal and perhaps cyclical factors, from Census hirings on employment metrics, “Cash for clunkers” on auto metrics, tax relief on retail metrics, emergency unemployment extension on jobless claims metrics, and first-time home buyer credits on housing metrics.

Quantitative easing is the latest intervention, and one with an ostensibly long tail. And here the results are only slightly more significant, with the average daily performance of the S&P 500 in the Pre period was 0.03%, while in the Post period it was 0.12%. An outperformance that could have been expected about 25% of the time by random chance alone. There are slight differences in this random chance portion, depending on the type of statistical test, an example of which is shown below (where the dashed and solid lines are Pre and Post, respectively). Also the ratio of the volatility in the Pre/Post period remains 1.3, which is again statistically significant at the 99% level. 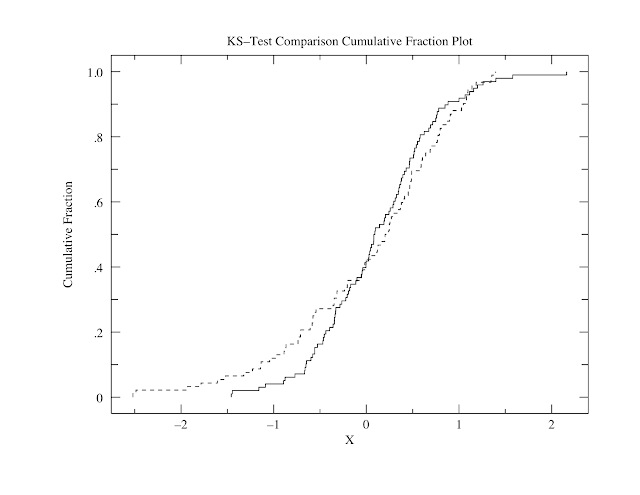 We can see the results of this in the clear illustration below. The Post period is tightly and normally distributed with a dominant positive bias of 0.12 (percent), and the Pre period has the unusually defining, negative skew. The upward bias in the Post period, relative to the normal seasonal patterns, should not be minimized. The significant impact of these biases also shows in that the top 1% daily performance in the Pre period is 1.4%, while we see that in the Post period it has surged to a dizzying 2.2%. 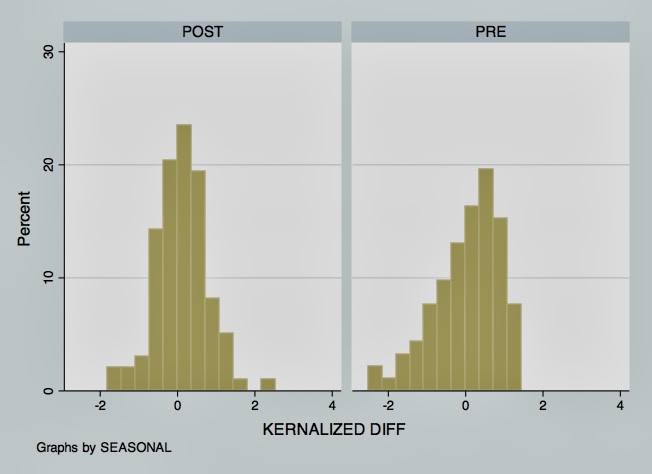 This upward bias in the financial markets since June shows the impact of the Federal Reserve in contorting normal seasonal patterns. Looking at these differences and error proportions, we see that about half of the variance and up-bias in the S&P 500 since then could be attributed to this central bank’s intervention. It’s the type of gains that may not fully disappear once tapering begins, though at least the normal risk profile should at least return then. And this normal risk profile would have a bottom 1% daily performance of -2.3% and -3.1%, in the Pre and Post periods respectively. Versus the -2.5% and -1.6% which we have seen this year. Note the only daily performance in this year’s Pre period that was worse than -2.3% was from the late June sell-off, notably in the aftermath of Chairman Bernanke’s testimony. For more on this statistics topics as well as their ramifications, you can see the popular “Tail risks, have we met?” and “Tail concordance” notes, respectively.