Surprised to see that private sector employers have added just under 200k jobs a month (2% annualized), for the past year? Also surprised to see that the private sector is sporting a 3% wage increase over this past year, while the rest of the economy sees little inflation? You likely are surprised, if you are one of the nearly 70% of Americans in the private sector, who neither work in retail industries nor alongside corporate management. This 70% includes many of us who are manufacturers, educators, physicians, flight attendants, newspaper reporters, bankers, and a wide spectrum of other professionals. These 70% of Americans, representing the heart of the country’s creativity, have been paralyzed by even lower gear of labor economic progress, during the past year.

We illustrate this point of strongly heterogeneous outcomes, with three simple paired charts. Using the Department of Labor data, these charts show the industry disaggregation of private sector employment performance during the past 12 months, through October 2013. The size of the data bubble reflects the size of that industry’s employment base. While the retail, and professional and business services industries are labeled red, select other industries are labeled green. Note that the change in the private sector unemployment rate has been nearly -0.7%, during this time (in Charts A and C below we already display this change with percentage units along the horizontal axis). Workers in which industries have most economically benefited from this drop in the unemployment rate, through a combination of relatively better job and salary growth? 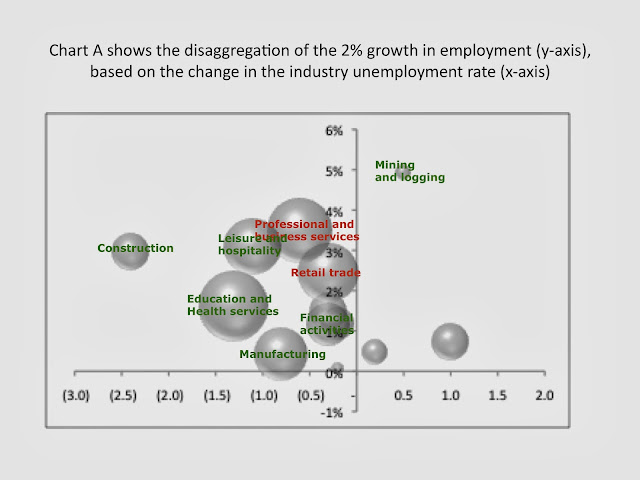 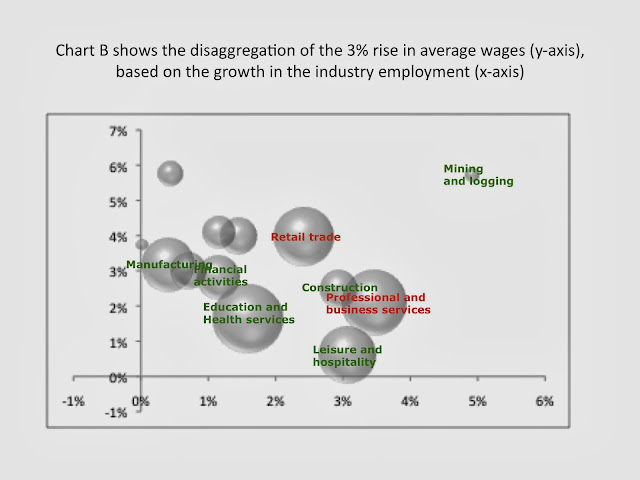 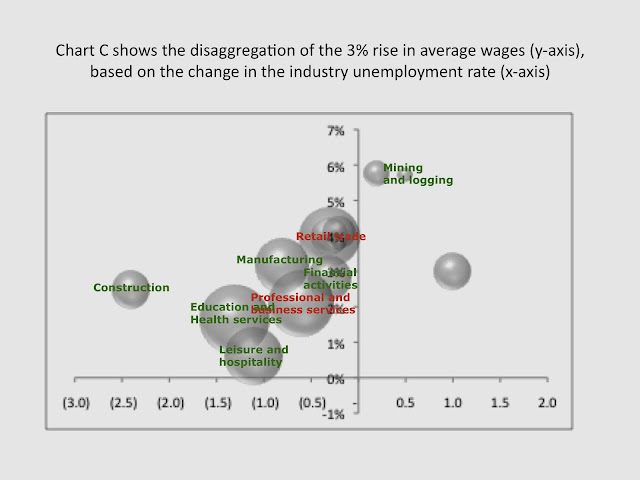 Through these charts we clearly notice that in this past year, dichotomously, the economic gains are most felt by only corporate workers and those in retail type jobs. This concentration has the largest statistical performance differences, jointly across these charted metrics. And, curiously, these two industries host the most extreme occupational wage levels, along the widened salary continuum. Think burger flippers and secretaries on one hand, and lawyers and CEOs on the other hand. So while it is true we have been adding about 200k private sector jobs monthly in the U.S. and real GDP is growing modestly, the ability to take part in these labor economic gains is highly dependent, in this case, on what line of work one seeks to perform.