In recent months, the current account deficit has risen. The latest data shows:

This has started making many people worried. Is such a `large’ current account deficit a cause for concern?

How long should a man’s legs be? Long enough to touch the ground.

Under a fixed exchange rate, where the central bank holds the rate fixed by trading on the market:

But all this changes under a floating exchange rate! 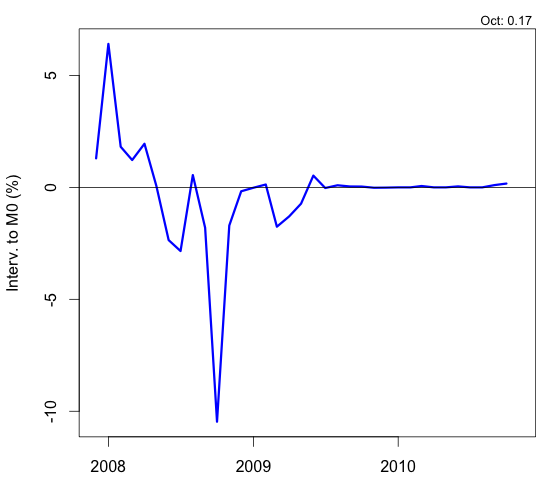 As the graph above shows, RBI’s trading on the currency market has been at near-zero values in recent months: we have something that is essentially a floating exchange rate. The rupee is now a fairly big market, and small scale trading by RBI has zero impact on the price: i.e. what we’re seeing is a true market price. Under a floating exchange rate:

In the very short run (e.g. a day), changes in the exchange rate can have little impact upon imports or exports. So if $10 billion suddenly leaves the country in a day, when the rupee depreciates, there can’t be a response from import or exports immediately. The only response that can come about immediately is: from capital flows.

When $10 billion leaves the country, the rupee depreciates, and some investors think that they will score some nice returns by buying short-dated rupee securities. They step in in the breach, thus yielding an equilibrium.

So I will conjecture: A country that has capital controls against short-dated debt flows will have more volatility on the currency market.

One can think of many good reasons for domestic and overseas economic agents to do INR trading outside India. E.g. foreigners are, presently, not permitted to trade on the onshore currency futures. Given that gross flows across the Indian border, on the BOP, are now at $1.3 trillion a year, it is not surprising that there is a lot of rupee trading going on. Until big changes to the capital controls take place, I believe there will be an increasing shift of INR trading away from India.

2.  Neeraj said…  Just below the graph you write “…and small scale trading by RBI has zero impact on the price: i.e. what we’re seeing is a true market price…”

Well this still is not true price of rupee unless off course full convertibility is introduced. Would you agree with that?

Neeraj: I agree with you that capital controls can potentially change the situation significantly. So one can think at two levels. First, for a given set of capital controls, a central bank can float as in not trading. That gives you a float, but yes, the price that comes out of this is distorted because there are capital controls. As an example, the government can have non-interference in the domestic market for DRAM chips, but the domestic price can itself be distorted through quantitative restrictions or customs duties on DRAM chips. So even though the government is not manipulating the domestic price by directly trading in the market (as it does with foodgrain or currency) the observed price is a distorted one. Then comes the second level where you have full convertibility. Once again, here the central bank could choose to trade in the market or it could choose to not trade in the market. Only when there are no capital controls + no trading by the central bank do you get to the true floating rate and the market’s price.

3.  Durga said…  Some queries I had:
a. With the frequent RBI interventions; is our exchange rate policy closer to the fixed or flexible type?
b. The bid-ask spreads on Rupee is not as narrow as the international currencies; would not that be a hindrance to the equilibrium condition you were talking about?

Durga: Modulo the issue raised by Neeraj and touched upon above, I think we’re a fairly flexible rate today. If INR trading globally is $40 billion, then RBI trading of anything less than $2 billion per day would have a negligible impact on the price. RBI has to either hit the market with very big trades (over $2 billion a day, i.e. over $40 billion a month, i.e. Chinese style currency manipulation) or RBI has to sit back and accept the price. Small trades are pointless, and actually make you wonder what the strategy there is.

That said, the rupee is still a small currency. India is a GDP of only $1.25 trillion and there are a lot of restrictions on cross-border commerce. So there is a long way to go before the INR becomes a serious international currency. It does not, hence, surprise me to see that the spreads on the INR are much worse than those seen for the big international currencies.

4.  Anonymous said…  The intuition on the floating rate is accurate I believe, but is there any level where the deficit actually becomes dangerous? An interesting survey would be to see if the deficit is funding an investment (novel enough if the rate of return of higher than the rate of borrowing) or being used for consumption (hence destabilizing). More accurate reflections would actually emerge from the Revenue deficit and primary deficit. These are figures which actually appear very rarely on most deficit arguments……but the revenue deficit is a more accurate description of the adverse effects of a deficit. If investors were also made aware of such facts, I think both the financial and goods markets would benefit the Economy.

Finally, Anonymous, you ask: Is there a point where the CAD becomes so big that it becomes dangerous? We should think in two parts.

First, in a place like the US, there has been a lot of concern that the imbalance (= the very large CAD) is too big in the sense that under reasonable assumptions, the US is not going to be able to service all the capital coming into the country. After all, all the equity / debt capital that comes into (say) India today inexorably requires that at future dates, dividends and coupon payments and debt repayment have to happen in dollars, which will require purchases of foreign exchange by residents. In order to service the borrowing of the US today, substantial exports growth will be required, which is unlikely. Hence, when this borrowing of today is to be repaid in the future, a huge dollar depreciation will have to take place.

As long as there is an environment of high growth in exports of goods and services, there is no problem. If, hypothetically, you see a country with a big CAD but you also have a WEAK pace of exports growth then you know that at future dates, there will be pressure on the currency which will give sharp depreciations. Odds are, the financial system will see that and these fears will translate into a depreciation right away! Conversely, if you see capital inflows going into investments which will bolster growth of exports of goods and services, then you feel comfortable that there is no problem.

I believe that’s a fair description of the present Indian situation. Over the last 15 years, the gross inflows on the current account into India (which can be roughly interpreted as the total revenues from exporting goods and services) grew by 8.1 times, from $42 billion in 1994-95 to $343 billion in 2009-10. This was an average annual growth rate of 15%. This is a huge pace of growth, and gives me confidence that the CAD coming in today will be serviced tomorrow without large currency depreciation. If, hypothetically, you disagree with my optimism about future growth in exports of goods and services, then you would think that this large CAD today increases the odds of INR depreciation in the future, and you would go short the rupee.

For smaller emerging markets, there is a risk of sudden changes in international financing conditions, which is rooted in the lack of information in the hands of foreign investors about the country. Then a large CAD could mean that if something goes wrong and a lot of capital leaves the country, then it could yield a large currency depreciation. I believe this is less and less an issue for the large emerging markets like India, where problems of asymmetric information and lack-of-attention in the global community are not a problem.