Even with No Fed Taper, Look for Slower Growth in Nominal Transactions

The Fed decided on September 18 to maintain its rate of securities purchases at $85 billion per month rather than reducing or “tapering” the amount of its monthly securities purchases as was, for reasons not entirely clear to me, was widely expected by the financial market cognoscenti. Many analysts interpreted the Fed’s decision not to taper as one of maintaining the same degree of monetary policy accommodation.

As Milton Friedman used to teach, the degree of accommodation or restriction of monetary policy cannot be evaluated in isolation, but rather must be evaluated in relation to the actions of the banking system. For example, in the early 1930s, Federal Reserve credit grew quite rapidly. In isolation, this appeared to be a very accommodative monetary policy. However, given that banks were contracting their credit by amounts greater than the amounts of credit being created by the Fed, monetary policy turned out to be very restrictive, relatively speaking.

Similarly, this econtrarian would argue that the Fed’s decision to maintain its securities purchase program at $85 billion per month will result in a tightening in monetary policy if recent trends in the behavior of commercial bank credit persist. This tightening in monetary policy is likely to result in slower growth in nominal transactions. That is, we should expect to see slower growth in the nominal domestic demand for goods and services and/or a slower rate of increase in the prices of risk assets such as equities. Mind you, had the Fed decided on September 18 to taper the rate at which it was going to purchase securities, this would have resulted in an even greater tightening in monetary policy than the no-taper decision did. 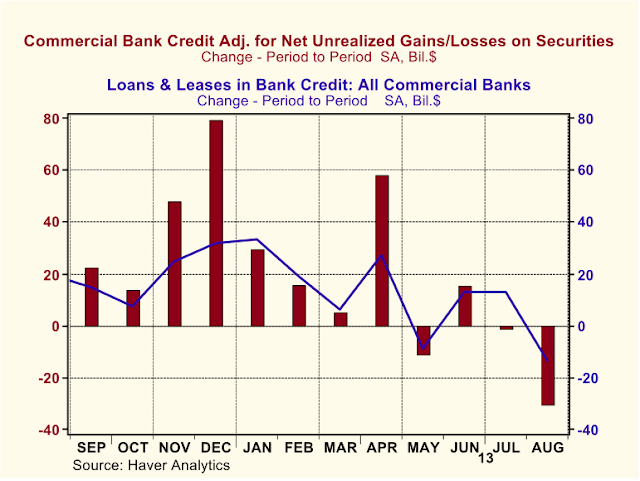 But, if the Federal Reserve did not desire a slowdown in the growth of nominal transactions, it could step up its thin-air credit creation to compensate for the shortfall in commercial bank credit creation. According to this view, then, a view to which I subscribe (and apparently only I), whether monetary policy is becoming more accommodative (more restrictive) depends on whether the sum of Fed credit and commercial bank credit is growing faster (slower).

In mid-September 2012, the Fed embarked on its third round of securities purchases, QEIII. In the 11 months ended August 2013, the 11 months in which QEIII has been in effect, the Fed’s balance sheet, i.e., total factors supplying reserve funds (Federal Reserve release H.4.1) had increased by $76.4 billion per month on average. (In these same 11 months, Fed outright holdings of Treasury coupon and mortgage-backed securities increased $74.0 billion per month on average.)

Now, annualized growth in the sum of Fed credit and commercial bank credit in the range of 6.1% to 6.7% in the context of a longer-run median growth rate of 6.7% for this credit aggregate does not represent a restrictive monetary policy in an absolute sense. But, as discussed above, if this credit aggregate does, in fact, grow in this range over the next 12 months, it would represent a move toward more restriction or less accommodation, however you want to describe it, than what prevailed in the 11 months ended August 2013. And, as it would be more restrictive/less accommodative, then we should expect a moderation in the growth of nominal transactions over the coming 12 months, which would imply a moderation in the rate of advance in equity prices.

I have to admit that I am puzzled by the recent contraction in commercial bank credit. The most recent Fed survey of bank lending terms showed an easing in those terms, which would imply faster growth in bank credit, not a contraction. Although recent unrealized losses on bank holdings of securities due to rising interest rates might have reduced bank capital, in general, bank capital ratios are higher than required. So, it is entirely possible that bank credit could start to grow again in the near future.

But, in the other direction, we could be just one random number, i.e., one employment report, away from a Fed decision to reduce its rate of securities purchases, according to comments made by St. Louis Fed President Bullard on September 20. The upshot of all this is that if you want to know where the economy is headed, “follow the money’, more accurately, follow the thin-air credit, by keeping an eye on the Fed’s H.4.1 report, Factors Affecting Reserve Balances, released on Thursday afternoons and the Fed’s H.8 report, Assets and Liabilities of Commercial Banks in the U.S., released on Friday afternoons.