The Case Shiller Index reported last week that the median US house sale price in July was up 12.4% year over year. This severely lagged and smoothed index actually represents the 3 month average contract price of repeat sales only, with a time mid point of mid April.

Are you interested in where the 3 month moving average of the Dow was in mid April? Do you doubt the usefulness of the real time Dow even though it just replaced 3 components or the S&P even though it regularly replaces components? I didn’t think so. You want to know the price of the market today, right now, as shown by as representative and broad an index as possible. Case Shiller’s methodology is preposterous in this regard.

Earlier this month, electronic real estate broker Redfin released current contract data for August for the 19 US metro markets it covers. This includes all contracts reported to the regional MLS’s for those markets. The 19 markets are mostly in the Northeast and on the West Coast, with only four markets in the US interior hinterlands, but it’s broad enough to give us a reasonably good idea of where the market stood and was headed a month ago based on contracts signed in August. 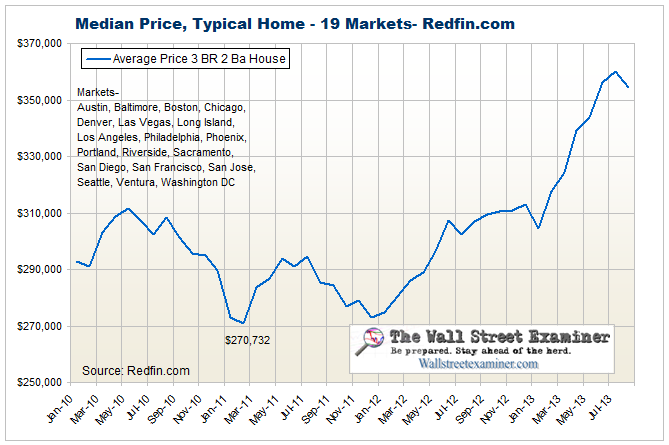 The chart suggests that price gains got a little too hot by July and entered a correction in August. This is a typical seasonal pattern.

Last year, the market was so hot coming off the lows that it merely paused in the second half. It will be interesting to see how much of a second half pullback happens this year. Real time listing prices from DepartmentofNumbers.com suggest not much. Listing prices have routinely been consistent with subsequently reported sales data plus a normal margin. Therefore they are a reliable indicator of the market’s trend in real time. Sellers are apparently still willing to raise prices because the market feedback they get from their agents is that inventories remain tight, with strong demand for good quality, well located properties.

The volume of current sales contracts has come off from recently red hot levels but is still strong year to year. Redfin reported that August sales volume fell by 4.3% from July but is up 6.2% versus August 2012 when mortgage rates were much lower.

Redfin also collects and reports data on the number of offers it submits and the number of house showings it conducts. Showings were down 13.9% in the week ended August 31 versus 4 weeks before but still up 19% year over year. Offers were down 13.4% versus 4 weeks prior, but up 13% versus August 2012. Activity is still much stronger this year than last year in spite of higher mortgage rates. Rising rates and prices push buyers off the fence to buy now rather than wait. This is typical inflationary behavior that the Fed pretends not to see by ignoring housing inflation.

The chart below shows the massive demand bulge that started early in 2013 as mortgage rates began to rise. The seasonal decline that began in mid year is larger than normal, but the uptrend is intact, showing no sign of slowing. The pullback in demand appears to be giveback following a period of overheated and unsustainable demand. 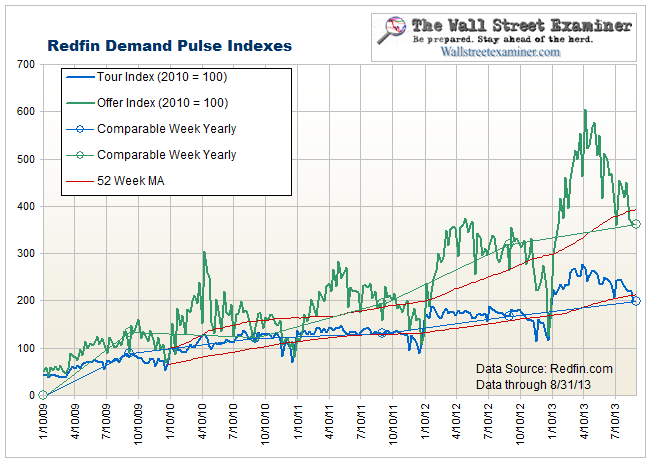 Another service that provides closed sale data on a real time basis shows similar gains. Dataquick.com publishes closed sales for 98 of the 100 largest US metros from public record data, each week. It aggregates the data on a rolling 4 week basis. Typically, recorded sales in most locales lag the closing dates by about 3 weeks. The most recent data would therefore tend to represent sales closed in August and early September, with contracts typically reached in June and July.

Dataquick US Home Sales and Prices
Click to enlarge.

Dataquick reported sales volume of 256,733 properties as of the 30 days ended September 26, for an annual increase in sales volume of 17%, a minimal slowing from the 18.3% reported a month earlier.

Redfin reports that supply shrank in August, as is seasonally normal, with active MLS listings in the 19 markets down 2.6% from July and down 18.2% from August 2012.

DepartmentofNumbers.com which collects listings data from the 55 largest US metros showed real time listings still rising through July, then leveling off in August and September, with a month to month increase of 0.3% as of September 23, but that was still 2.7% below September 2012′s extremely tight level. Normally listing inventories decline from August through January. This data includes a broader sampling of US heartland and Southern markets than does Redfin. The data shows that supply remains tighter for this time of year than at any time in the past 7 years since DepartmentofNumbers.com first reported the data.

Restricted supply appears to be the primary driver of the house price bubble. At some point, higher prices should bring forth a torrent of supply, but part of the problem is that ZIRP also restricts supply because it renders too much of a penalty for cashing out equity. Millions of baby boomers reaching retirement age with substantial equity in their properties either opt not to sell, or if they do sell, to remain in the market as purchasers rather than renting and investing cash elsewhere. This is one reason why the percentage of all cash sales remains so high. Boomers are essentially swapping properties with one another rather than buying bank CDs and moving to Costa Rica. ZIRP not only inflates demand, it restricts supply.

This supply constraint will only be alleviated if interest rates are allowed to rise to an attractive enough level to motivate property owners to cash out. Otherwise older owners will continue to opt to hold property rather than liquidate. ZIRP eliminates the incentive for them to do so.

As a result, I expect supply to remain tight for the foreseeable future. Given the tight supply, demand is still sufficient to continue to put upward pressure on prices. The first signs that the price rise is coming to an end will be a drop in sales volume or a material increase in supply, or both.

That would require not just higher mortgage rates. I would also require the end of the suppression of short term rates that subsidizes the banks while penalizing the elderly who have already cashed out and have been forced to consume the principal of their life savings. ZIRP is not only immoral but also counterproductive economically, unless you believe that housing bubbles are good for the economy. Fed policy makers should have figured that one out by now, but apparently they are incapable of learning.

Want to learn more about my approach to the markets? Enjoy the short videos in the right sidebar!

Stay up to date with the machinations of the Fed, Treasury, Primary Dealers and foreign central banks in the US market, in the Fed Report in the Professional Edition, Money Liquidity, and Real Estate Package. Try it risk free for 30 days. Get the research and analysis you need to understand these critical forces and stay ahead of the herd. Click this link and begin your risk free trial NOW!