Big News Isn’t That Payrolls Missed, It’s That the Number Is Wrong

The big news shouldn’t be the nonfarm payrolls number. The big news is the fact that the number is almost certain to be proven materially wrong. How ridiculous is it to pay any attention to the initial release, especially when the BLS reports a gaping margin of error of +/-90,000 and is often revised by 50,000 or more before the final number is known?

The market reacts to each release based on how far the headline number is from the consensus estimate of economists. The bigger the miss, the bigger the reaction. God forbid the Fed bases any of its decision making on it. The first guesstimate is never “correct.” It is revised in each of the next two months, then to annual an benchmark based on tax data, then to 5 years of revisions to the seasonal adjustment as the BLS hones its Seasonally Adjusted fictional number ever closer to the final number. That’s right. The process of seasonal adjustment isn’t complete until an additional 5 years of data is in.

Let’s look at the initial revisions of just the past two months’ data. In June, the original seasonally adjusted headline number was a guess of 195,000. It’s now 172,000 after two revisions. July originally was 162,000, but it is now 104,000 with another major revision to come next month, not to mention the annual benchmarking to be announced on September 26.

The July revision was -48,000. Such large revisions are not uncommon. April’s number was revised up by 50,000 in the release for June. Ask yourself this. How would the markets have reacted to the revised numbers had they been released in the first place?

The BLS reported a seasonally adjusted (SA) gain of 162,000 in August nonfarm payrolls Friday, missing the consensus estimates of around 177,000-180,000. Based on the strength of August Federal withholding tax collections, the current number is almost certain to be revised upward substantially. How would the market have reacted differently if given the facts, and how will the Fed evaluate this erroneous data?

The trend of the actual, not seasonally adjusted data (NSA), has gone in a virtually straight line at near +1.6% for 22 months. This month was no exception, registering a year to year gain of 1.65%. The NSA data is subject to much smaller revisions than the SA data, although I would also expect an upward revision next month. 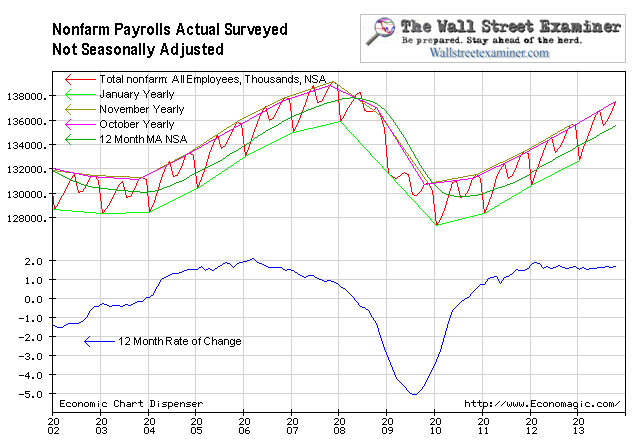 The fact that the market often reacts strongly to the latest month’s figure is just another example of the absurd fixation with reacting to data that’s never correct on the first release and ultimately doesn’t matter anyway. The market’s trend over time is based on money, not data. When there’s too much money around, the market rallies, and the pundits then provide the “reasons” or excuses. Excess liquidity causes asset bubbles to grow. They stop growing and bull markets end when liquidity is withdrawn.

The Fed is still providing plenty of excess liquidity, but it is not the only influence. All central banks deal with the same major banks/dealers. The BoJ plays an important role in the US market and it continues to pump liquidity into the system. The ECB also plays a major roll, and it has been allowing money to be retired all year, with devastating results in the US Treasury market and emerging markets. These forces destroy liquidity and create headwinds for the Fed and BoJ. We’ve seen the markets become choppier as a result. I cover these issues in depth each week in the Professional Edition Fed and Treasury updates.

The August SA headline number compares with a gain of 378,000 in the actual, not seasonally adjusted number (NSA). August is a swing month, with an employment decline in some years and an increase in others. Since the NSA number is not seasonally finagled we must look at Augusts of past years to judge whether it’s good, so-so, or lousy.

There’s the question of full time versus part time jobs growth. I’ll address that in a subsequent post.

QE 3-4, which was announced in September 2012, with the cash flow starting in November, has not caused any increase in the growth rate. There’s absolutely no difference in the growth rate between the QE pause period in 2012 and since QE3-4 started. The evidence is incontrovertible. QE has not contributed to jobs growth. There is no trickle down. Bernanke’s cherished theory, which he espoused in his 2010 oped in the Washington Post justifying QE2, is a sham.

The Fed seems to be telegraphing that it has finally recognized that QE is not working as expected, floating numerous trial balloons for the past several months that it would begin to taper QE. This is in spite of the fact that the unemployment rate is still well above its 6.5% target as the trigger for reducing QE. It’s a tacit admission that they know that QE is not working.

While QE has not spurred jobs growth, the same can’t be said for what the Fed’s shenanigans have done for stocks and housing prices, which have surged out of all proportion to the rate of jobs growth. I covered the comparative data on this in last month’s post on the jobs number.

Note: The numbers above come from the BLS the Current Employment Statistics Survey or CES, a survey of business establishments. The BLS also does a survey of households. The household survey or CPS — Current Population Survey– sometimes tells a different story from the establishment survey. It’s also important in that it breaks out full time employment from total employment so that we can analyze that important metric separately. That story continues in Part 2 of this report which will be posted later.

Stay up to date with the machinations of the Fed, Treasury, Primary Dealers and foreign central banks in the US market, in the Fed Report in the Professional Edition, Money Liquidity, and Real Estate Package. Try it risk free for 30 days. Get the research and analysis you need to understand these critical forces and stay ahead of the herd. Click this link and begin your risk free trial NOW!