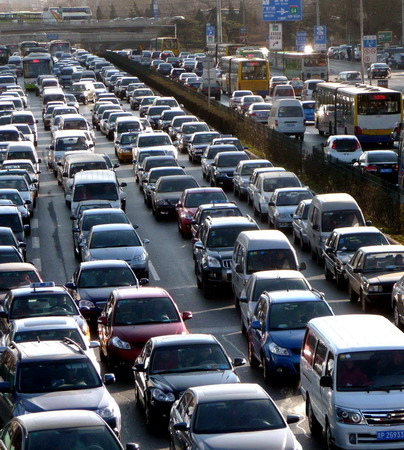 Traffic jams like this one in Beijing are likely to get much worse.  Photo:  China Daily

Through November 2010, China’s auto sales reached 16.4 million, putting that country on track to equal or exceed the U.S. 2005 record.  The forecast for 2011 is for sales to reach 20 million which would dwarf the U.S. record.

Meanwhile, the U.S. auto market seems to be headed for 2010 sales between 11 and 12 million, as seen in the following graph from Calculated Risk. 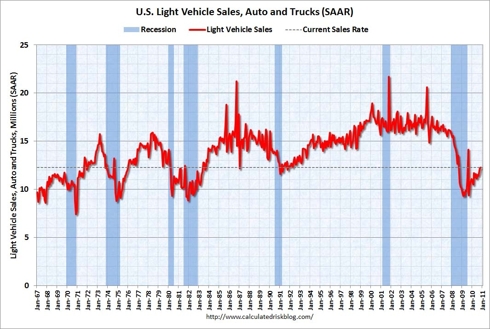 Overseas automakers including GM, Ford Motor Co and Nissan Motor Co should benefit next year if the Chinese government ends a rebate that favors domestic manufacturers as expected by Dec 31, said Bill Russo, a Beijing-based senior adviser at Booz & Co.

It looks like China will move into position as the largest consumer of automobiles in history and is likely to remain there.

As shown in the following graph, it could be said that China and the U.S. are driving in different directions.  However, it is to be expected that U.S. auto sales should continue to improve so that the down sloping blue arrow may well be temporary.  It is not reasonable to expect that the U.S. growth rate will soon (if ever) reach that of China. 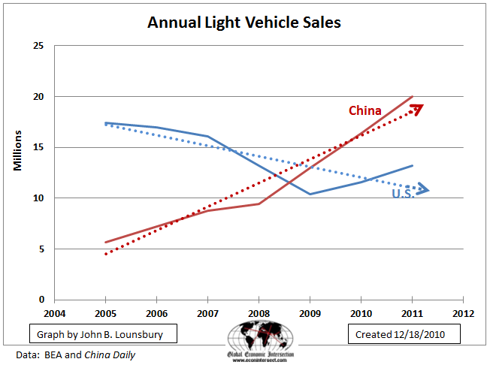 Simply based on population ratios it might be expected that China could eventually have around 3 – 4 times the auto sales of the U.S.

One reply on “China on Wheels”