Financial Planning Magazine has an article that maps the very high net worth population of the U.S.  A slide show is available.

There are almost 55,000 “ultra-high-net-worth” individuals in the U.S.  These are people with net worth over $30 million.  More than half live in just five states and almost 2/3 live in just 11 states.  Three states have less than 100 ultra high net worth individuals each.

Global Economic Intersection has constructed a table of the top 11 states:

The above is really a view from outer space compared to the detailed data related to wealth that is available.  The U.S. Census has data collected over the years up to and including 2009 about race and ethnicity, income distribution, median family incomes, home values, mortgages, rents and education right down to the neighborhood level.  The Census has created a myriad of interactive maps based on the data.

Let’s focus on the income information.  The median family income map by county for the U.S. is shown below. 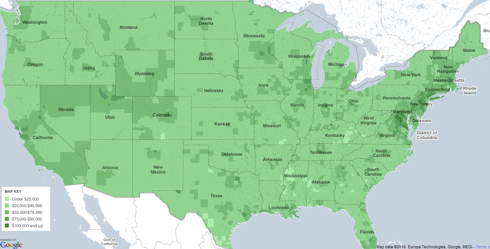 The changes in median family income since 2000 is shown by county in the following map. 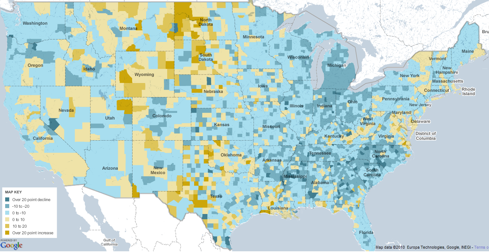 It is clear that not only is wealth highly localized, but the dramatic changes in income in various locales over the last ten years indicate that the potential for shifts in geographic patterns of wealth are also changing.

Note:  Flowing Data has an excellent discussion of the mapping system.

Hat tip to Barry Ritholtz at The Big Picture for the two map graphics.