New factory orders (actual, adjusted for inflation and not seasonally adjusted), which is a broader measure than durable goods orders because it includes non-durables, managed to stabilize at a 0.6% year to year gain in April. That followed 5 straight months of year to year declines. As the Fed inflates a stock market bubble, US manufacturing has gone nowhere. 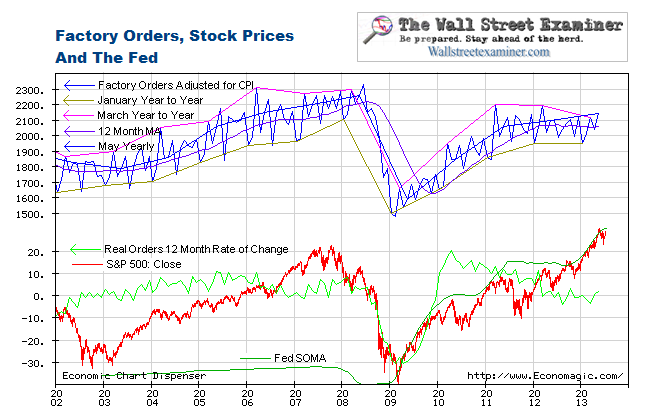 Real Factory Orders, The Stock Market, and The Fed – Click to enlarge

I adjust this measure for inflation and use not seasonally manipulated data in order to give as close a representation as possible of the actual unit volume of orders and thus the actual trend.

Real new factory orders, NSA, were down 3.7% month to month. That was actually a pretty good performance for April, which is always a down month. April 2012 saw a drop of 7.8%. The average April change during the previous 10 years was also a drop of 7.8%. But the improved performance of April is likely to prove temporary as the ISM’s new manufacturing orders index cratered in May.

More important is the big picture trend and the response of manufacturing to Fed stimulus. After rebounding sharply from the 2009 bottom through early 2011, the trend then stalled. The annual growth rate has been close to zero since April of 2010. Since the Fed started settling its QE3 MBS purchases in November 2012, this index has shown no material improvement. The money printing is not trickling into the manufacturing sector. The ISM data for May suggests that the factory data for that month will be even worse. So don’t believe the hype about a return of US manufacturing.

Until 2010 manufacturing had tended to trend with stock prices, with both clearly reacting to Fed quantitative easing or tightening. In 2008, the Fed had begun to withdraw liquidity from the markets by shrinking the SOMA while conducting emergency lending operations to the banking and shadow banking structures. At the same time the Fed cut out the usual direct funding of the Primary Dealers. The end-around allowed the money to reach manufacturers while starving the securities dealers. There was a late burst of manufacturing activity.

Draining funds from the Primary Dealers caused the 2008 stock market crash, but because the Fed was flooding other financial structures with liquidity directly, manufacturing held up for a while. It finally succumbed when the Treasury crowded out the rest of the market in 2008 when it raised $800 billion in a short period of time in September-October 2008 for stimulus and TARP.

In 2011, manufacturing turned up in March, the usual peak month. That was several months after QE 2 started. I wrote earlier this year, “To be fair, we should give this data until March 2013 to see if it will respond to QE3-4.” That date has passed and the US manufacturing trend has shown no improvement.

Track the really important data with me and stay up to date with the machinations of the Fed, Treasury, Primary Dealers and foreign central banks in the US market, in the Fed Report in the Professional Edition, Money and Liquidity Package. Try it risk free for 30 days. Don’t miss another day. Get the research and analysis you need to understand these critical forces. Be prepared. Stay ahead of the herd. Click this link and begin your risk free trial NOW!

One reply on “Why Not To Believe US Manufacturing Renaissance Hype”