In case you haven’t seen it elsewhere (it is one of the most popular graphs on the financial nodes on the internet), here is Calculated Risk’s employment tracking chart updated with yesterday’s new data. 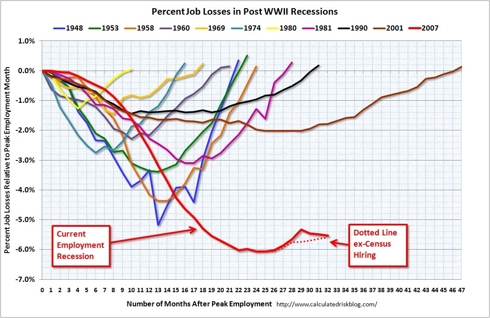 Essentially, what we see is a gradual employment improvement roughly paralleling the 2001 recession recovery, with a Census Bureau temporary hiring bubble imposed.  If this trajectory continues, the payroll employment level at the start of the recession will be recovered by 2016.

The average number of new jobs per year from now until 2016, to regain all the jobs lost in the Great Recession, would be about 1.4 million per year.  In other words, a recovery parallel to that of 2002-2004 will not ever catch up with population growth.  We must do better than we did in the last recovery if healthy employment levels are ever to be regained.  As I reported previously, to recover all lost jobs and increase enough to match population growth would require more than 290,000 a month or 3.5 million a year.  What is needed is 2.5 times larger than what seems to be a reasonable projection today.

At the beginning of the year, in “Employment May Never Recover” I posted the following graph: 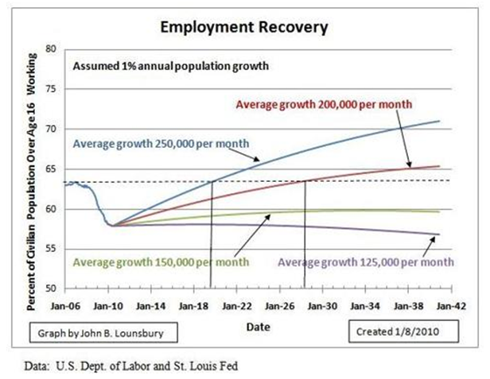 Even if we average between 150,000 and 190,000 job gains a month (1.8 million to 2.3 million a year) from now on, through good times and recessions, we will never regain 2007 employment levels per capita.  So, as we struggle to rise above 1 million job gains a year, don’t think that the goal should be to get to 2 million a year.  As they say in my neck of the woods, that dog don’t hunt.