That story isn’t exactly wrong, at least not over the long-run, but Susan Houseman has been digging down into the details and finding arguments which suggests that it is a seriously incomplete version of what’s happening in the U.S. manufacturing sector. Houseman presented some of these arguments in a paper written with Christopher Kurz, Paul Lengermann, and Benjamin Mandel, called  “Offshoring Bias in U.S. Manufacturing,” which appeared in the Spring 2011 issue of my own Journal of Economic Perspectives. (Like all articles in JEP back to the first issue in 1987, it is freely available courtesy of the American Economic Association.) In turn, their JEP paper was a revision of a more detailed Federal Reserve working paper in 2010, available here. However, Houseman offers a nice overview of her arguments in an interview recently published in fedgazette, a publication of the Federal Reserve Bank of Minneapolis.

For background, here are four figures created by the ever-useful FRED website maintained by the Federal Reserve Bank of St. Louis. The first shows level of manufacturing output, which since the official end of the recession in 2009 has recovered to the level in 2000. The second shows manufacturing employment, which has dropped off substantially over that time. The third shows annual rates of change in manufacturing productivity, which is volatile, but seems often to be rising at 2-3% per year. And the fourth shows levels of manufacturing compensation, which hasn’t been rising since 2000–as one might have expected based on rising productivity in thus sector. 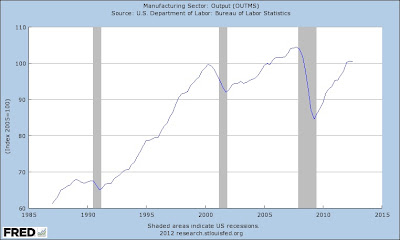 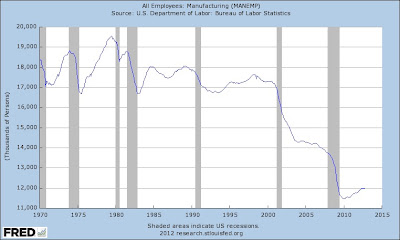 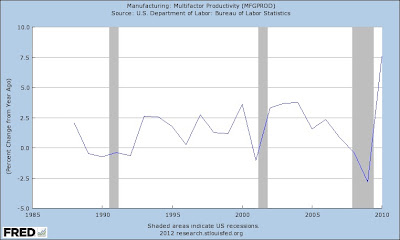 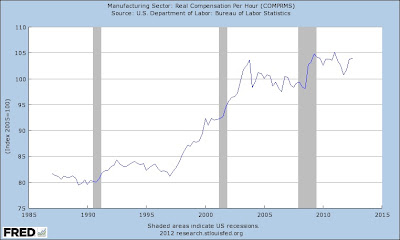 After reading Houseman, when you hear the standard story about how high productivity in manufacturing is leading to reduced employment, the following thoughts should rattle through your head:

2) Most of the productivity growth in manufacturing computers is because computers are becoming so much faster and better over time, and government statistics count that a productivity growth, not because an average worker is producing a dramatically greater quantity of computers. Houseman:

“The standard argument is that the rapid productivity growth in computers is coming from product innovation. This year’s computers and semiconductors are faster and do more than last year’s models. And that product innovation essentially gets captured in the price indexes the government uses to deflate computer and semiconductor shipments. The price indexes for most products increase over time—that’s inflation. But, for example, the price indexes used to deflate computer shipments have actually fallen by a whopping 21 percent per year since the late 1990s. Those rapid price declines largely reflect adjustments for the growing power of computers. And that extraordinary decline in computer price indexes translates into extraordinary growth in real value added and productivity in the computer industry as measured in government statistics. So, in some statistical sense, today’s computer may be the equivalent of, say, 13 computers in 1998. … The reason jobs in computers have been lost is not because productivity growth has crowded them out; not at all. It’s because much of the production has gone overseas….”

3)  A sizeable share of what looks like growth in manufacturing productivity is actually from importing less expensive inputs to production. Houseman:

“[T]here’s been a lot of growth in manufacturers’ use of foreign intermediate inputs since the 1990s, and most of those inputs come from developing and low-wage countries where costs are lower. We point out that those lower costs aren’t being captured by statistical agencies, and so, as a result, the growth of those imported inputs is being undercounted. …  Suppose an auto manufacturer used to buy tires from a domestic tire manufacturer. Then it outsources the purchase of its tires to, say, Mexico, and the Mexicans sell the tires for half the price. That price drop—when the auto manufacturer switches to the low-cost Mexican supplier—isn’t caught in our statistics. And if you don’t capture that price drop, it’s going to look like, in some statistical sense, the manufacturer can make the same car but only needs two tires. … Our statistical agencies try to measure price changes, but they miss them when the price drops because companies have shifted to a low-cost supplier. So because we don’t catch the price drop associated with offshoring, it looks like we can produce the same thing with fewer inputs—productivity growth. It also looks like we are creating more value here in the United States than we really are.”

4) If productivity in manufacturing rises because of automation, then those gains in productivity may benefit the owners of the machines–that is, benefit capital rather than labor. Houseman:

“And then another standard story has to do with automation. Basically, capital is substituting for labor. Automation can lead to job losses. And the returns from automation, or higher capital use, won’t necessarily be shared with workers.”

“Then, finally, there’s probably been some shifting in the sorts of production that occur here. In particular, less of the labor-intensive production is done in the United States, and that would result in job losses and higher labor productivity. Again, the gains from that productivity growth aren’t necessarily going to be shared with remaining workers. So part of the answer to the puzzle is that even if productivity gains are real, there’s really nothing that guarantees those gains will be broadly shared by workers.”

Add all these factors up, and the condition of U.S. manufacturing looks more ominous than the standard story of high productivity and resulting job losses. For more on the future of global and U.S. manufacturing, see this November 30 post on “Global Manufacturing: A McKinsey View.”

How Globalization Nearly Exterminated the Buffalo