A Wonderful Life for Community Banks?

by Bob Beard and Carl W. Raggio III, as posted by John Slater at Capital Matters

During the year-end holidays we reach out for the comfort of the familiar.  One of the best ways to do that is to revisit films with a seasonal focus such as White Christmas, Miracle on 34th Street and most particularly It’s a Wonderful Life.  Directed by Frank Capra and released December 20, 1946, the film, starring Jimmy Stewart and Donna Reed tells the story of a young man, George Bailey, who was plunged into a difficult and entirely unfair situation as a result of the actions of others beyond his control.  George is driven to a point of such deep despair that he is considering suicide.  He is saved by a guardian angel and the support of those for whom he has toiled unselfishly for years.  For decades the film has provided us with the assurance that, if we just do right by others, we will ultimately be redeemed.

Great film of course, but did you ever think about the underlying issues that forced George Bailey to consider jumping off a bridge?  Bailey begrudgingly inherited a community-oriented Building and Loan Association in the 1940’s when just before Christmas his Uncle lost over $8,000 on the way to make a deposit.  The regulators had just arrived at the Building and Loan and found the loss.  They promptly issued a warrant for George’s arrest.  Even though he was innocent George was so unwound by the actions of the regulators that he felt his life was at end.

Fast forward to 2012.  This time don’t look for a friendly angel to save a Jimmy Stewart style hero.  On December 4, 2009 the FDIC seized Buckhead Bank and sold its assets to State Bank and Trust Company of Macon, Georgia which also assumed the liabilities of the Buckhead Bank.  On December 3, 2012, just one day before the FDIC statute for claims would expire, the FDIC Receiver filed a lawsuit against the Board Members and Management of Buckhead Bank, seeking damages for gross negligence and in particular their failure to adhere to bank policies and safe and sound lending practices with regard to a large number of the bank’s loans, many of which funded commercial real estate (CRE) and property development transactions.

The FDIC’s claims could apply to many community banks faced with similar economic circumstances in the early 2000’s, which led up to the financial panic in 2008.  Many, if not most, community banks had:

The FDIC appears to be claiming that the bank board had a responsibility to evaluate the quality of the bank’s portfolio on a fairly granular way and to take action to prevent the foreseeable risks entailed in the bank’s lending practices and portfolio concentrations.

Whether the Board or Management of Buckhead Bank failed to administer policies or assure that the bank engaged in safe and sound lending practices is a matter for the courts and we offer no special insight on that.  Rather, this article is intended to focus on the lessons current bank directors and officers should learn from this lawsuit.

The question for directors is whether they are at risk today for failing to take action to protect their banks from foreseeable issues down the road for which the FDIC might someday deem them grossly negligent for failing to address.  Some might suggest that the real question is why any busy businessman or professional with personal assets to protect would want to take the risks inherent in serving on a community bank board.  We’ve published a white paper suggesting that most banks under $1 billion in assets must either grow dramatically or merge with a larger bank in order to survive.  That means that for the directors of many small banks there is limited upside.

The White House is visibly committed to take actions to increase regulation of the banking system.  While the emphasis to date has been on the large banks, the regulatory agencies have determined that the impact of Basel III and the Dodd-Frank Act will apply to all banks, large or small.  So what will the nature of those new regulations be?

What are the implications for community banks and their directors?

The number of community banks in the U. S. is going to shrink dramatically over the next few years.  The drivers are limited access to capital, increasingly unaffordable regulatory oversight and the inability of smaller banks to provide competitive returns on equity.  If a particular bank has a solid and growth competent management team as well as access to capital, it will have opportunities to acquire other banks that don’t have these resources in the next few years to hit that magic $1 billion assets mark.  However, if a bank does not have those attributes it will likely be forced to partner with a stronger bank, cede control and hopefully enable its shareholders to exchange their stock for that of a fast growing winner.

What are the risks for community banks that fail to address this situation proactively?

One option, which appears to be the alternative of choice today for many small banks, is to ignore the impending regulatory changes and bet that a rapidly growing economy in the next year or so will enable to them to escape the foreseeable industry changes.  For many banks with heavy concentration in CRE, demand for commercial real estate will also have to grow and show a long-term trend towards value stability.

However, nothing in the current environment would suggest the dramatic improvement in CRE valuations that will be needed to salvage many banks’ CRE portfolios.  CRE loan maturities began to peak in 2012, but the pressure from maturing loans will not be over for many banks until well into 2015. 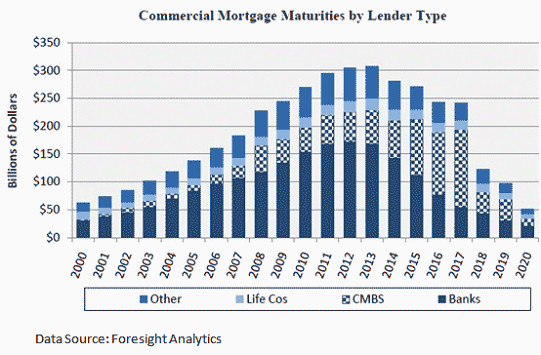 And nothing in the current economic environment indicates a strengthening in loan demand sufficient to enable most small banks to address the dual pressures from higher capital requirements and deteriorating loan quality though the origination of new, highly profitable, high quality, loan assets.

With this as background, fast forward to 2015.  As a director of a small community bank, you have experienced the following.  Capital requirements have been raised and your bank has been unable to find new capital to meet the requirements.  As a result your bank is currently operating under a regulatory agreement issued in late 2013 requiring a reduction in real estate and other concentrations.  Worse, the brief, but sharp recession that began in the summer of 2014 led to a further decline in CRE collateral value of up to 30%, putting many formerly performing loans in jeopardy of default.  As you watch the regulators enter your bank’s front doors, your worst fears have been realized.

Now imagine that a new administration has come into power in 2017.  Riding on a wave of populist resentment, newly appointed regulators are out for blood.  And the first place they look is the boards of now defunct banks.  Their claim?  Directors of those banks were on notice that capital requirements were going to increase, but failed to take timely action.  Further, the directors knew or should have known that collateral values placed on many real estate assets securing the banks’ portfolios far overstated the saleable value of the real estate.  According to the complaints these directors were grossly negligent in failing to address this highly foreseeable situation.

Back to the movie: you will recall that George bails his thrift out of regulatory repercussions because of contributions from the clients he helped along the way.  In essence the community came to his defense with the funds he loaned them.  This is not likely going to happen to our community banks today.  And kind angels seem to be in pretty short supply.  However, an opportunity still exists for A Wonderful Life for community banks and their boards if they act now to head off the foreseeable consequences of the current situation through partnering with that bank down the road with a strong management team, access to capital and a stock destined for rapid growth as smart acquisitions begin to pay off in improved competitiveness and higher profits.

** Note 1. “How Community Banks Can Fight Back Against Basel III” by Kamal Mustafa, Chairman and CEO of Invictus Consulting Group, LLC as published in the American Banker, November 26, 2012.