The significance of this table is explained in the report:

The estimated $52 billion would be borne predominantly by four firms (Bank of America, JPMorgan Chase, Wells Fargo, and Citigroup), accounting for the majority of the industry‟s total exposure and projected losses.  In the aggregate these four banks have already reserved $9.9 billion for future representations and warranties expenses, which is in addition to the $11.4 billion in expenses already incurred.  Thus, of this potential liability, $21.3 billion has either been previously expensed or reserved for by the major banks.  Given the timing associated with put-back requests and associated accounting recognition, it is not inconceivable that the major banks could recognize future losses over a 2-3 year period.

The following table looks at the summary financial statement data for the largest banks cited by the COP report. 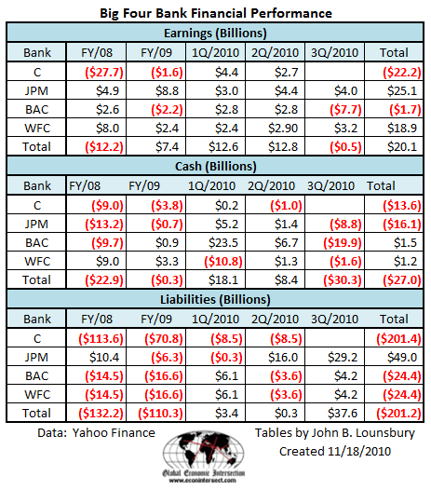 Looking simply at the earnings that the banks have been reporting it would appear that, in aggregate, the additional $31 billion in put-backs would not be a problem spread over 2-3 years.

However, earnings are not reflected in cash positions.  One reason for this is that earnings have been aided by the part of the reduction in liabilities that the banks have taken.  Just as taking provisions against future possible losses can reduce reported earnings, when previously taken provisions are reduced then earnings are augmented.  The massive reductions in liabilities have included reduced provisions against future losses.  Earnings have been augmented each quarter that such actions were taken.

So the aggregated earnings over the past 2 3/4 years of $20.7 billion have been boosted by reductions in loss provisions.  It can be seen that liabilities have just started to grow again in 3Q/2010.  If another $31 billion in loss provisions is needed, as the COP report states, then the earnings outlook for banks may be insufficient to cover the put-backs that are coming.

If the recent slump in home prices continues, say another 10%, the number of underwater mortgages, estimated at about 21% at the end of the second quarter, will increase significantly.  The number of MBS (mortgage backed securities) showing losses will increase.  And the number of put-backs could well exceed the COP estimate.

It does not appear that the put-back exposure for the major banks is generally appreciated.  When the largest of the three key cash flow/balance sheet attributes is liabilities (which are easily manipulated with accounting tricks) there is some real concern about just how well the potential put-backs can be handled.  And when the liability numbers are larger by an order of magnitude, is it a case of the tail wagging the dog?

Of course, it is difficult at this juncture to judge whether the COP estimate will prove to be accurate.  In October Yves Smith at Naked Capitalism discussed the hype involving the attempts of PIMCO to move toward put-backs to BAC.  She found the activity to be more posturing than serious action and didn’t think the PIMCO effort would amount to much.  See her posts here and here.

Another disturbing thought that occurs to me is that there will be many potential put-back opportunities for Fannie and Freddie, as well as for the Fed.   The vast amounts of MBS (mortgage backed securities) that now reside in these hands might eventually contain many tens of billions of losses that could be subject to put-backs.  What is disturbing about this is that I can envision the government and the Fed settling claims that might be legitimate for pennies on the dollar – say settle for $5 billion when the claims might actually be worth $100 billion.  This could be another backdoor bailout!  In May I discussed the thoughts of retired Goldman executive John Talbott on just this type of activity.

My numbers in the previous paragraph are purely speculative but I don’t think they are outside the realm of possibility.  And the settlements would be just the sort of wrist slap action that we have come to expect, as was the case in the SEC settlement of the Goldman Sachs Abacus case $550 million.  A litany of important legal issues were swept under the rug with that settlement.

A good discussion of the problem of trivial penalties with selective enforcement was presented recently by Ajay Shah.  Such types of action can come to be viewed, not as penalties, but simply as the cost of doing business.

5 replies on “Bank Earnings May Not Cover Put-Back Losses.”