The Labor Department reported that seasonally adjusted (SA) first time claims for unemployment fell by 30,000 to 339,000 from a

revised 363,000 in the advance report for the week ended October 6, 2012. The consensus estimate of 370,000 was a huge miss, as usual. Once again the seasonally adjusted data misstated the real performance of this measure. But in this case it was only catching up with reality. It had been understating the degree of improvement in this measure since last February.

“The advance number of actual initial claims under state programs, unadjusted, totaled 327,063 in the week ending October 6, an increase of 25,990 from the previous week. There were 405,906 initial claims in the comparable week in 2011.”

The added emphasis is mine.

The DOL also shows the comparison with last year. Using the adjusted figure of 330,000, this year shows a year to year decrease of approximately 74,000, an improvement of 18.4% versus the corresponding week last year.

On a week to week basis, claims actually rose by approximately 28,000. The corresponding calendar week over the prior 10 years has always shown an increase. Last year the increase was approximately 72,000, and in 2010, 89,000. The average change for the corresponding week over the previous 10 years was an increase of approximately 56,000. By these standards, last week compared extremely favorably. There are news reports claiming that this is a statistical anomaly due to an incomplete or understated end of quarter report from one state. If so, this will be washed out next week. However, overall, the data is within the trend of the last 2 years. I suspect that all the extra attention and questioning of this week’s number is overblown due to the controversy about the jobs data last week.

Note: To avoid the confusion inherent in the fictitious SA data, I analyze the actual numbers of claims (NSA). It is a simple matter to extract the trend from the actual data and compare the latest week’s actual performance to the trend, to last year, and to the average performance for the week over the prior 10 years. It’s easy to see graphically whether the trend is accelerating, decelerating, or about the same.

On the surface, and assuming that there’s not a dramatic understatement of this week’s NSA number, it appears that the Seasonally Adjusted fictional number finally came back to trend this week after being off track for 7 months, misleading investors, traders, economists, and the media into thinking that the trend was not improving when in fact it was. I had been pointing out the simple fact that the seasonally adjusted data was misrepresenting the trend for the past several months. But don’t worry, regardless of how the NSA actual data responds in the weeks ahead, the seasonally adjusted data will go off track again probably sooner rather than later. It’s just the nature of the beast. 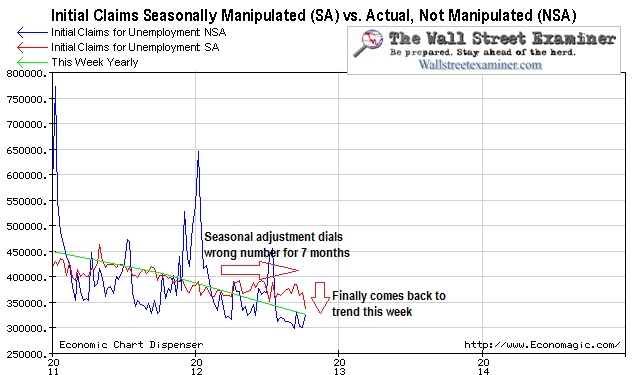 As the number of workers eligible for unemployment compensation has trended up since 2009, the percentage of workers filing first time claims has continued to decline. Comparing the yearly line for the current week to the 52 week moving average, the trend of improvement continues to track at a steady rate. The current level is at the levels of 2004 and 2005, which was when the bubble began to accelerate. By this standard, the current level of claims is far stronger than the 2008-09 recession period and is continuing to strengthen.

Lately, economists have been arguing about the “natural” unemployment rate. I think we’re at it now. If we recognize that the bubble period with its millions of fake jobs was abnormal, then the low level of claims during 2006 and 2007 was also abnormal. Where we are today is probably normal and the expectation that the US will ever get back to 6% or 5.5% unemployment, as suggested this week by Minneapolis Fed President Katcherlakota, is a false hope.

Plotted on an inverse scale, the correlation of the trend of claims with the trend of stock prices over the longer term is strong, while allowing for wide intermediate term swings in stock prices. Both trends are largely driven by the Fed’s operations with Primary Dealers (covered weekly in the Professional Edition Fed Report; See also The Conomy Game, a free report). This chart suggests that as long as this trend in claims is intact, the S&P would be overbought at approximately 1450, and oversold at roughly 1200. On that basis it became overbought in mid September

I wrote earlier in September that “barring a much stronger improvement in the claims data which would suggest accelerating growth, the market will be at greater risk of a correction in the next few months.” But the Fed may have changed the rules on September 13, by adding more cash to the markets every month and promising to continue to so so until the unemployment rate showed sustained improvement. That will take until a new bubble emerges, spawning new fake jobs, or conversely, until rises in food, energy, and materials costs force the Fed to reverse course. [I cover the technical side of the market in the Professional Edition Daily Market Updates.]

For more charts and additional analysis, visit the permanent Employment Charts page, updated whenever new data becomes available. You can bookmark that page for future reference.