The Labor Department reported that seasonally adjusted (SA) first time claims for unemployment rose by 15,000 to 382,000 in the advance report for the week ended September 8. The consensus estimate of economists was 369,000, missing by a significant margin. As so often is the case, the seasonally adjusted data grossly misstated the performance of this measure. The stock market did not react as it waited for the FOMC announcement at 12:30 New York time this afternoon.

Actual claims, not seasonally adjusted (NSA – the actual total of individual state counts submitted to the Department of Labor) were 299,000 (rounded) including the addition of 2,000 claims to adjust for incomplete state counts that do not include interstate claims at the time of the advance release. This was the lowest number of initial claims for this week since September 2007. This week was better than the week ended September 10, 2011 when new claims totaled 328,900, and the week of 9/11/10 at 342,700. The current week was also better than the average of the last 10 years’ claims for this week of 317,000. Approximately 29,000 (9%) fewer people filed first time claims this year than in the same week in 2011. On a week to week basis, claims were down by approximately 10,000.

To avoid the confusion inherent in the fictitious SA data, I ignore it and analyze the actual numbers of claims filed that week as counted by the 50 states and submitted to the Department of Labor. It is a simple matter to extract the trend from the actual data (NSA) and compare the latest week’s actual performance to the trend, to last year, and to the average performance for the week over the prior 10 years. It’s easy to see graphically whether the trend is accelerating, decelerating, or about the same. This week it’s showing slight acceleration (improvement), but it’s too small and too new to be considered more than just normal variance.

This week’s data continues to be consistent with the improving trend of the past two years. It is well within the range of weekly fluctuations in the rate of change from -3% to -20% that have occurred since mid 2010. Since mid 2011, in most weeks the annual rate of change has been within a couple of percent of -10%. The trend has been remarkably consistent.

Looking back 10 years, claims have always declined during the corresponding week, with the exception of 2005 in the aftermath of Hurricane Katrina. The week to week changes have averaged a drop of 13,000. The current week to week change was a decline of around 10,000. Last year claims fell by 19,700 in the corresponding week. In 2010 when the economy was rebounding from the worst part of the recession, they fell by 40,100. The current weekly change is weaker than in recent years but the total number of claims compares very favorably with every year since 2008.

As clearly shown by the chart below, the trend is still improving. The annual rate of improvement is now slightly faster than it was last year at this time. This is probably just a normal fluctuation.

The consistency is clear in the annual rate of change graph. The rate of decrease in new claims continues to hover near the -10% axis. The current year to year decline of 9% remains near the middle of the range of the rate of change over the past 2 years. Given this steady improvement the Fed has no reason for additional QE other than its own state of panic in the face of the constant pundit clamor for it.   We’ll know in a few hours from this posting whether the Fed caves, or whether it feels synthetic QE, which has been working, is sufficient.  (Note added after initial posting:  The Fed did “cave.”)

As the number of workers eligible for unemployment compensation has trended up since 2009, the percentage of workers filing first time claims has continued to decline. Comparing the yearly line for the current week to the 52 week moving average, the trend of improvement continues to track at a steady rate. The current level is near the level of 2003-04, the last non-bubble, “normal” year. By this standard, the current level of claims is “normal.”

Lately, economists have been arguing about the “natural” unemployment rate. I think we’re at it now. If we recognize that the bubble period with its millions of fake jobs was abnormal, then the low level of claims during those years was also abnormal. Where we are today is probably normal and the expectation that the US will ever get back to 6% unemployment is a false hope.

Plotted on an inverse scale, the correlation of the trend of claims with the trend of stock prices over the longer term is strong, while allowing for wide intermediate term swings in stock prices. Both trends are largely driven by the Fed’s operations with Primary Dealers (covered weekly in the Professional Edition Fed Report; See also The Conomy Game, a free report). This chart suggests that as long as this trend in claims is intact, the S&P would be overbought at approximately 1450, and oversold at roughly 1200. The market is now within a few points of overbought parameter. Barring a much stronger improvement in the claims data that would suggest accelerating growth, the market will be at greater risk of a correction in the next few months. [I cover the technical side of the market in the Professional Edition Daily Market Updates.]

The chart below gives a longer term perspective on claims. The trend has been improving while remaining above the bubble years with their 10 million fake jobs taking orders for new and unneeded condos and houses, building them, permitting and inspecting them, and taking and processing mortgage applications.

The punditry consensus estimate missed again this week, as usual. How is it that conomists can be surprised so often? Easy. They are looking at bad data–the SA data. Seasonal adjustment factors for this week have varied over the last 10 years from 1.178 to 1.321. The range of variance is over 12%, which is less than many weeks when the variance is as much as 20%, but still a huge range. Based on that range the seasonally adjusted number could have been anywhere from 352,000 to 395,000. This week’s factor was 1.284. 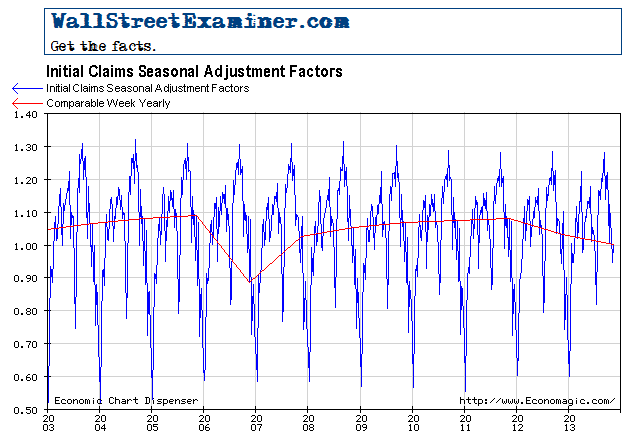 Even though the actual data has not warranted more QE, i.e. money printing, conomists and Wall Street have become increasingly confused by the bad data, and the QE drumbeat has grown louder. Bernanke has been hearing the drumbeat and singing his song to it but more QE is not not needed and not justified. We will know in just a couple of hours whether the Fed has been bamboozled yet again. I have been of the opinion that they wouldn’t act at this meeting, but the demands for more of the drug have become so loud and so strident that I have little confidence in my guesstimate.

For long term charts and other measures of initial claims and other employment measures visit the permanent Employment Charts page, updated whenever new data becomes available. Be sure to check out the section on real time Federal withholding taxes which I just update. It suggests that in spite of weakness in withholding versus July, the headline jobs number could surprise on the upside.