Bloomberg had this headline yesterday:

They led with this:

The gap between U.S. bank deposits and loans is growing at the fastest pace in two years, providing lenders with more funds to buy bonds and temper the biggest sell-off in Treasuries since 2010.

As deposits increased 3.3 percent to $8.88 trillion in the two months ended July 31, business lending rose 0.7 percent to $7.11 trillion, Federal Reserve data show. The record gap of $1.77 trillion has expanded 15 percent since May, the biggest similar-period gain since July, 2010. Banks have already bought $136.4 billion in Treasury and government agency debt this year, more than double the $62.6 billion in all of 2011, pushing their holdings to an all-time high of $1.84 trillion.

In September 2010 the combined holdings of Treasuries and Agencies, Non-MBS, in the commercial banks stood at $547 billion. From then until February 2012, the banks were net sellers! Their holdings dropped to $445 billion. The point of the article, or at least the headline, was supposedly that rising deposits were forcing banks to buy Treasuries. In fact, deposits were rising just as fast during the period when banks were selling Treasuries and Agencies. The banks’ holdings barely budged until June 20 of this year when they were at $460 billion. From June 20 to August 8, the most recent reported data, banks finally went on a buying binge, adding $60 billion of this paper to their holdings. There’s no correlation or connection of this buying to the steady increase in deposits. 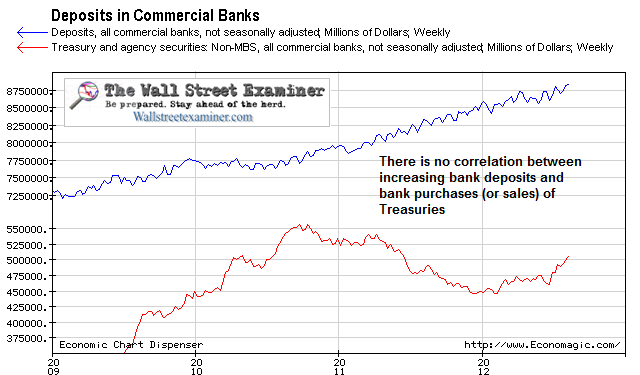 Do I need to tell you what has happened to Treasuries since the banks went on this buying binge? The Treasury market has cratered, with 10 year yields rising from the 1.40 area to the 1.80 area. So much for the banks as great market timers. In fact, their sudden buying surge may have marked the final blowoff top of the Treasury buying panic bubble. It’s too soon to know for sure, but it has that kind of stench. Banks have a long and storied history of guessing horrifically wrong at the worst possible time, leading to financial crashes and government bailouts. Let’s hope that this isn’t another one of those occasions.

The headline said that the banks doubled their Treasury purchases, which is not true. In the body of the article the reporters wrote that that the banks have bought $136 billion in Treasury and Agency debt this year. That’s technically more correct than the headline, but still highly misleading. It implies, and I know that readers, including leading bloggers, have inferred from the article that the banks were buying US Government debt. 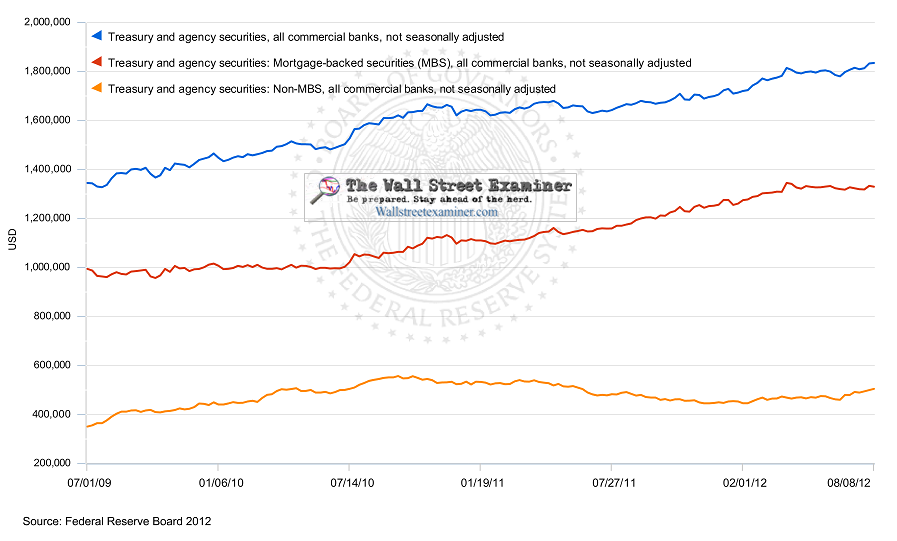 So it is true that the banks have bought lots of securities. But most of them are mortgage securities, and they are not new credit to the financial system as a whole. The vast majority of these purchases have been a result of the refinancing boom which accelerated as a result of the sharp plunge in Treasury yields and mortgage rates this spring. Borrowers have been paying off old Fannie and Freddie securities. The banks issued the new mortgages that paid off those loans, then sell them to Fannie and Freddie, who package them and sell them back to the banks as MBS. The loans have been coming off Fannie and Freddie’s books and onto the books of the banking system. There’s no new credit created, just a shifting of assets from the shadow banking system to the banks. Even though many of these loans have been coming out of Fannie and Freddie’s owned portfolios, when sold to the banks they continue to carry the Fannie/Freddie guarantee which comes from the US Government backing, which in turn is the Fed’s rationale for including them as government securities, and Bloomberg reporting them as such.

I’m not sure what the point of the Bloomberg piece was. If it was to show that rising deposits are forcing banks to buy Treasuries, the facts don’t support that. The rest of the report meandered aimlessly from one subject to the next, mixed with a hodgepodge of pundit quotes. One thing is sure. The implication that the banks have been huge buyers of Treasuries this year is not true, and the fact is that since the banks have started to buy Treasuries in June, the Treasury market has cratered. The banks may have been buying lately but some big players sure as hell are selling. That fact that the banks have suddenly become buyers is not a cause for celebration. 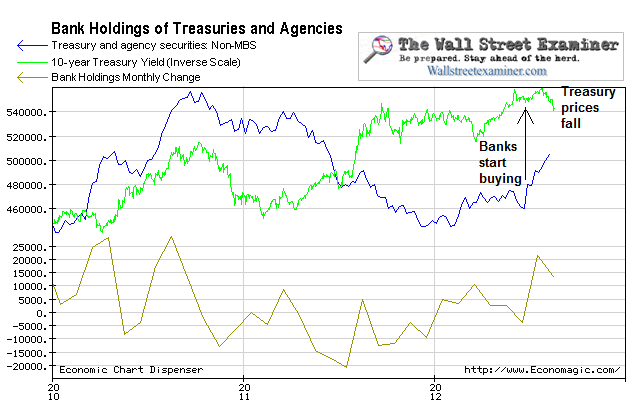 Stay up to date with the machinations of the Fed, Treasury, Primary Dealers and foreign central banks in the US market, along with regular updates of the US housing market, in the Fed Report in the Professional Edition, Money Liquidity, and Real Estate Package. Try it risk free for 30 days. Don’t miss another day. Get the research and analysis you need to understand these critical forces. Be prepared. Stay ahead of the herd.Click this link and begin your risk free trial NOW!

Follow @Lee_Adler on Twitter for real time market commentary and news updates that are relevant to you!