The Legend of Bennie the Beard, Henry the Hitman, and Gangbankster Dealers (A True Story with Real Data and Real People)

The Industrial Production news last week reminded me of a story. It’s a story that shows just how the Fed’s manipulation drives both the stock market and the conomy.  It’s also a story of the twisted personalities behind the facades of institutional power.  This is not something that you will read in the mainstream financial media. But, unbelievable as it may seem to you, each and every word of it is true- strange and chilling, but true to the last detail.  Grab a glass of sherry, a cigar, and a comfortable chair.  I shall lay out for you the outlines of this real drama of power, crime, and intrigue.

The Fed pumps up the conomy by funneling the money that it creates through the conduit of the financial markets. It does that by buying securities from the Primary Dealers.  Those securities go into the Fed’s so called System Open Market Account (SOMA). Historically, the Fed has typically purchased Treasury securities, but it has deviated from that policy and bought other securities from time to time.  In the modern era of the past 50 years or so, it has typically only purchased Treasuries, and only from the Primary Dealers.  That all changed in 2007.

In 2004 and 2005 the Fed needed to buy about $600 million of Treasuries from the Primary Dealers to move the SPX up by one point. As the bubble began to expand too fast in 2006 and 2007 the SPX began moving up a point per each $550 million or so of Fed purchases.  So the Fed slammed the brakes on the SOMA in the middle of 2007.  That’s when all the financial shenanigans that Fed policy had enabled suddenly came to a head, and the visible evidence of the underlying infection began to spew all over the front pages of the mainstream media.

As the splatter on the mirror grew that summer, young Ben Bernankenstein, Fed Chairman for just two years when everything seemed to be going right, was caught with his pants down.  He somehow had missed all the signs that the internet message board Cassandras had been wailing about for years.  He panicked.

With no real world experience, the academic Chairman reflected on the term paper he had written as a schoolboy. In it, he blamed the Fed for causing the first Great Depression by being too tight in 1929 and the 1930s.  He determined that he would follow the game plan he had laid out in that school assignment.  Instead of calmly continuing to fund the Wall Street gaming tables in the usual manner, wholesale via the usual Primary Dealer Gang, he would wildly throw cash directly to every gangbankster and Wall Street Don that showed up at his doorstep.

That end run direct to the players shut down the games of his Primary Dealer made men. They were starved out of the action. The stock market game was finished and the conomy, deprived of its drugs, went cold turkey.

The Fed, Industrial Production and Stock Prices 2004-08 – Click to enlarge

Bernankenstein (aka Bennie the Beard) continued his experiment and got even stingier with the Dealers in the second half of 2007. He increased his alphabet soup direct lending programs to the Wall Street mafia and their customers.  Ironically, he had made them indigent through his own game change.

Bennie wanted to “sterilize” the new direct to retail lending programs.  He wanted keep the size of the Fed’s balance sheet level so as not to stoke inflation.  To do that he had to sell Treasuries from SOMA to fund the TAF and all the other programs to follow.  So Bennie the Beard ordered his guy, Brian the bagman Sack, to sell hundreds of billions of Treasuries from the Fed’s account.  The Primary Dealers were steamrolled.  They had no choice but to bend over and take everything the Fed jammed them with, or else leave the game.

A couple of them couldn’t take it.  Bennie saved the inside men, and executed the outsiders right in the Street in Lower Manhattan, gangland style.  Nobody saw nuthin’. The reporters who showed up to get the story didn’t ask many questions.  They knew Benny the Beard was somehow responsible, but they were afraid for their jobs and kept their mouths shut, a story in its own right, which we won’t go into here.

The Fed continued to sell Treasuries to raise cash from the SOMA to fund these emergency direct loan programs.  These became, in effect, cash calls on the Dealers.  But they had no cash.  With Bennie the Beard having shut them out from their usual source of money, they couldn’t handle it.

The dealers could also no longer launder money for their other client, Henry the Hitman Paulson, who was usually fronted by the President, George Bush.  This time Paulson got in front of the cameras to threaten the straw men in Congress.  Bush wanted no part of it.  He called meetings, and he left as soon as they started. This one thing Bush knew.  He knew when to disappear.

The hired help in Congress knew who gave the orders, and they rubber stamped the Henry the Hitman’s demand for $700 mil. The Dealers were again squarely in the line of fire.  They knew that if they were ever to be able to run their game again, for now they had to liquidate their other holdings, even at huge losses, to buy Henry’s paper on top of the paper that Bennie was dumping on them.

With the markets flooded with Treasury paper and the dealers dumping everything else to pay for it, the market and the conomy crumbled in 2008.  Bennie the Beard had been pulling money out of the traditional wholesale Dealer funding network faster and faster in 2007 and 2008.  In 2008, terrorized by Bernankenstein’s and the Hitman’s “sky is falling” rhetoric, the hired straw men in Congress authorized the Treasury to pound the markets with $700 billion in new Treasury supply to fund stimulus and TARP.

The Primary Dealers not only run the government bond market game, but they run virtually every other financial game, from stocks to commodities to derivatives.  You name it, their fingerprints are all over it.  In 2008, with both the Treasury and the Fed burying them with torrents of new supply, which they had to buy if they wanted to keep running the Treasury game, the Primary Dealers were no longer able to maintain even the sham appearance of an orderly stock market.  Were it not for the fact that the whole world was panicked into immediately buying that Treasury paper from them, the collapse would have been complete before Bennie had the time to put together an immaculate deception to “save” the system.

Bennie initially recognized his blunder in late 2008, and began buying GSE paper from the Primary Dealers.  He also started a side game of buying MBS from the the other families in the city and around the country, like William the Gross out in Newport Beach, and that Blackstone wiseguy Schwartz, who ran the Greenwich games.  But that was not enough, so in March 2009 Bennie the Beard finally embarked on a massive Treasury Purchase program the way the old bosses, like Paul the Giant Volcker, and Al The Mumbler did it.  He would buy the paper direct from the made men, the Primary Dealers.  He would finally start cashing them out of the trouble they were in.

This was QE1, the return of traditional Permanent Open Market Operations, only on an unprecedented scale that the old godfathers, even Al the Mumbler, would never have dreamed of. Paul the Giant was not happy. The new front man, Obama, and new Treasury boss, Timmy “The Accountant” Geithner, who had moved up from the New York Fed Consigliere job, brought him in for appearance.  But he had been down in Florida for too long. Nodody cared what Paul The Giant thought any more.

The picture tells the story of what came next. 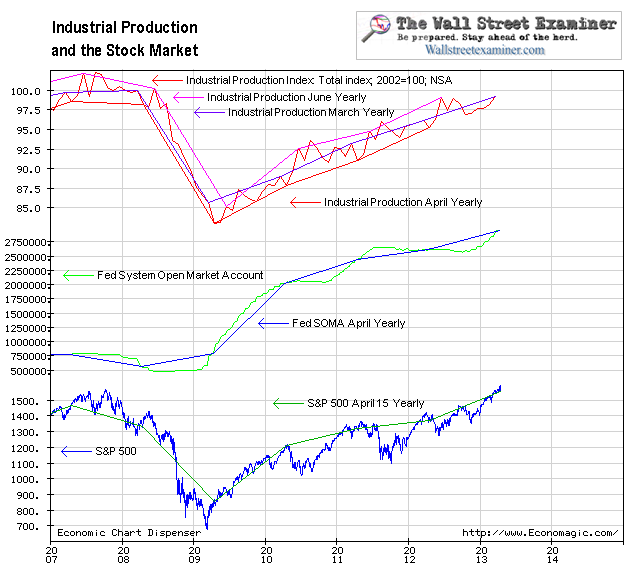 The Fed, Industrial Production and Stock Prices – Click to enlarge

Following the collapse, which the Fed had grossly exacerbated with its policies, the law kicked in, the law of diminishing marginal utility.  Instead of $600 mill of SOMA purchases to push the SPX up a point, like in 2004 and 2005, in the first half of 2009 the Fed needed to buy $1.5 billion of paper from the Dealers to move the SPX a point. By the time the Fed paused in early 2010, the cost was up to $1.75 billion per point and commodity inflation was raging.  The Fed’s fluid passing game of 2004-2006 was no more, and now even its ground game was barely able to grind out a couple of yards per carry.  The field had become ankle deep in mud and the Fed was getting covered in mud from the commodity inflation it was causing.  People were starving around the world. Protest gave way to revolution around the world.

Bennie the Beard had had enough, so he handed off to the ECB mob over in Brussels in 2011.  The ECB’s two big Long Term Refinancing Operations (LTRO) in late 2011 and early 2012 gave the U.S. market and conomy a boost.  It’s all one cash pool, and the U.S. Primary Dealers are also the running the games in Europe.  In fact, eight of the 21 Primary Dealers are European banks.  They put much of the LTRO money to work in U.S. markets, buying stocks, and especially buying U.S. Treasuries. The U.S. Treasury then spent that cash into the U.S. conomy, causing the U.S. market and conomy to sit up in a rigor mortis rally from December to March.

It all looked good on the surface. But it was fake, driven by central bank manipulation and gangland chicanery.  Same gang, same game, just different front men.

Lo and behold, with Benny holding the SOMA flat since last June, and the ECB now also temporarily out of the sludge pumping business, the U.S. stock market and U.S. industrial production have dropped back to where they were when the Fed shut down the pumps almost a year ago.

You see, there’s no vig any more. Without the vig, when the cash stops flowing the game stops growing.  If the boss don’t pump the game don’t jump.

There’s more to the story of course. I cover the chilling details of the intrigue every week in the Wall Street Examiner Professional Edition Fed Report.

More from The Wall Street Examiner