In a recent working paper, researchers at the the IMF (International Monetary Fund) attempt to reconcile the Peak Oil debate that whether resource constraints will dictate the future of oil output and prices, or advance in technology motivated by high oil price would eventually provide a solution to more production, as well as higher oil prices. 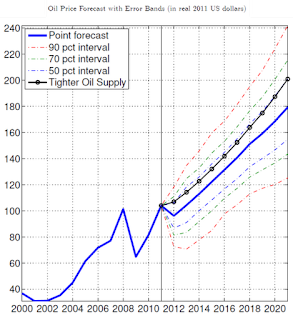 An economic model was developed incorporating both views, and identified two biggest factors contributing to the recent run-up in oil prices:

The paper also gives out this dire warning:

“….our prediction of small further increases in world oil production comes at the expense of a near doubling, permanently, of real oil prices over the coming decade. This is uncharted territory for the world economy….”

In general, various forecasts by different agencies seem to agree that world oil production will likely continue to have small increases with producers venturing out to exploit the more difficult and challenging formation.

However, what most forecasts as well as the IMF paper did not discuss is the scarce human capital that’s already seriously plaguing the oil industry, which could have serious implication in the future oil production and technology development.

With the aging and retirement of the boomer generations that began their careers in the late 1970s (see chart below), the oil industry is suffering an acute shortage of experienced skilled professionals.

This will only add to the cost of an oil barrel and become very disruptive (see graph below) as oil projects are getting more complex, more difficult and expensive to execute.

A separate study by the Petroleum Human Resources Council estimates about 39,000 workers will be needed in Canada alone to replace those who are expected to retire before 2020 just to maintain the status quo.  The industry could need as many as 130,000 new hires by the end of the decade with more bullish oil and gas prices.

Already at least one analyst firm is scaling back its drilling activity forecast for 2012, in part because there aren’t enough workers who can drill big, complicated wells.  For now, NES Global Talent sees a depletion of skilled workers in oil and gas fields in the United States, Great Britain and Australia, three of the busiest oil and gas regions, will become a major problem.

Schlumberger, the largest oilfield services company in the world, sees significant negative effect from peak oil labor manifesting by 2015, a short three years from now, with increasing inexperienced oil professionals, and that the talent problem will only get worse.

For now, most forecasts expect crude prices would remain high in 2012, mostly due to the Iran tension.  Meanwhile, OPEC just revised its 2012 world oil demand outlook slightly upwards citing a stable US economy and the shutdown of nuclear plants in Japan.  So if the IMF prediction comes true, it seems the peak oil labor could be just enough to tip the scale for doubling in oil price scenario a lot sooner than year 2022.

The future will not be easy.

For an in-depth analysis of the IMF working paper, check out IMF Paper: The Impact of Oil Price on GDP