The big economic news story on Monday was the ISM Purchasing

Managers Index. The headline number was only mildly positive, but it was enough so that Bloomberg was beside itself with joy. “Manufacturing in the U.S. expanded at a faster pace in March, driven by gains in employment and production that signal the world’s biggest economy is underpinning global growth.” Can you feel it? Underpinning global growth! The US, engine of the world!

Dow Jones was slightly less effusive. “Factory Speed-up,” blared Marketwatch. “Expansion in the U.S. manufacturing sector grew at a faster pace in March, and most industries experienced growth.”  Rupert Murdoch’s other rag, his crown jewel the Wall Street Urinal, screamed, “American Manufacturers Pick Up the Pace, Robust Consumer Demand Powers Factories at Home and Even Overseas, Where Order Growth Has Slowed in the Past Year.”  You could never accuse Rupert and his hired touts of cheerleading with that, could you? Thank goodness for all those impartial, skeptical, hard working financial journalists keeping us informed. Where would we be without them? Where would the markets be? Where would Goldman be? Just imagine.

The truth behind the headlines is somewhat less positive. In fact, when you get right down the the facts, some might say that they were awful. Those people, known as bears, are just never happy. You can’t please them. So let’s look at the data and see who’s got it right.

Let’s start with the headline number, the Purchasing Managers Index (PMI). Here’s how the ISM describes the index methodology.

The Institute also states that:

The diffusion index includes the percent of positive responses plus one-half of those responding the same (considered positive).

All seasonal adjustment factors are supplied by the U.S. Department of Commerce and are subject annually to relatively minor changes when conditions warrant them.

So even if the majority say business is getting worse, as long as its less than 58.4% of them, that’s ok. We’re good enough, smart enough, and strong enough, that doggone it, down is up. But better than 50% is super good.

I think I get their drift though. For many years, as US manufacturing was disappearing, growing serial financial bubbles and the creation of millions of fake real estate, construction and mortgage finance jobs, jobs and a few trillion in fake home equity, made up for the decline in manufacturing.  Given that healthy growth in fictitious income and wealth, as long as 42.6% or more of manufacturers were ok, all was well. The problem with that benchmark today is that the offshoring trend has (supposedly) reversed in the last year, so maybe that benchmark no longer applies. Time will tell, but it’s not the crux of the issue. The issue is whether the US manufacturing industry is really getting better.

The composite of 5 seasonally adjusted component surveys added up to a seasonally adjusted 53.4 in March, up from 52.4 in February. Remember, over 50 is good. It signals expansion. Hence the cheers from the captive media. With that in mind, here’s the big picture,  worth all of those headlines. Or is it? 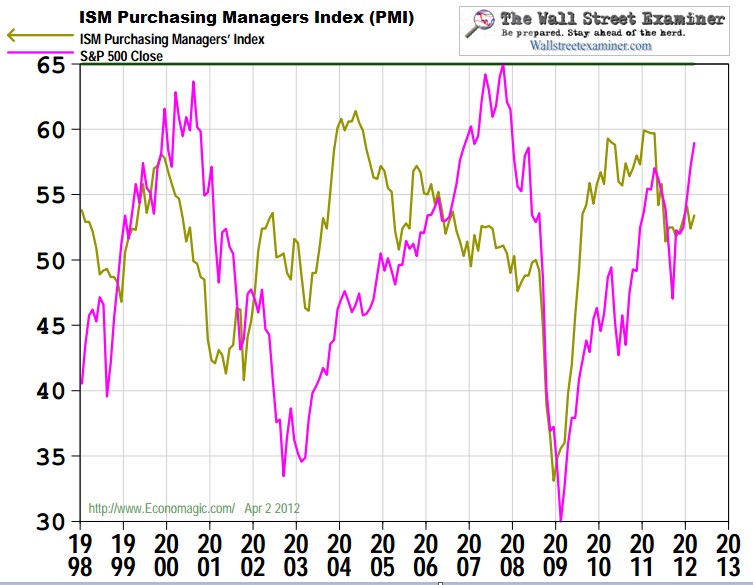 That’s some uptick in March. Do you need a magnifying glass? It’s true that the number is positive and has been fairly stable since the middle of last year.  But a gigantic negative divergence is developing versus the stock market. Notably, positive and negative divergences between the PMI and stock prices tend to last years before the financial markets get the news that something has changed. But don’t be lulled into a false sense of security about being above the ISM’s magic number 42.6. The real danger signal appears to be a drop below 50. That’s when stocks have cratered.

Regardless of the fact that manufacturing only comprises 11% of US GDP, this indicator has had some history over the past 14 years of being useful from the perspective that as long as it has been above 50, stocks have tended to remain in bull markets. On the other hand, had you bought the first crossing above 50 in 2002, you would have had your face ripped off. This ain’t no black box.

Of the 5 components of the PMI, the one that interests me the most is new orders. That’s the lead sled dog. Everything else follows. Without new orders, increases in the other components are simply made of hopium, and hopium won’t get far without new orders to back it up.

I did a little reverse engineering and by dividing the reported seasonally adjusted New Orders index by the reported seasonal factors, derived the actual index going back to 2002. This enables us to see the actual seasonal order patterns and to compare year to year and period to period changes on that basis. What no one, nowhere, no way, no how, told you today was that the actual, not seasonally adjusted Index of New Orders was a not so stellar 49.1. Last I looked, that’s less than 50. Oops. Where’s the expansion? We were there in February, just barely, at 50.7.

Does it seem like normal seasonality for March to be weaker than February. I didn’t think so, but I looked at data for 2002 through 2011 and the actual numbers were all over the place. March of 2009 and 2010 both were positive. The other years were negative and in most cases worse than this year. So the drop of 1.6 points this year wasn’t bad for a March, but it certainly wasn’t the basis for the kind of happy talk reporting we got from the mainstream media.

In fact, the year to year comparisons were a little scary. This year’s reading of 49.1 compared with 58.9 in March 2011 and 58.1 in March 2010. The only other years where the New Orders Index was less than 50 were recession years. 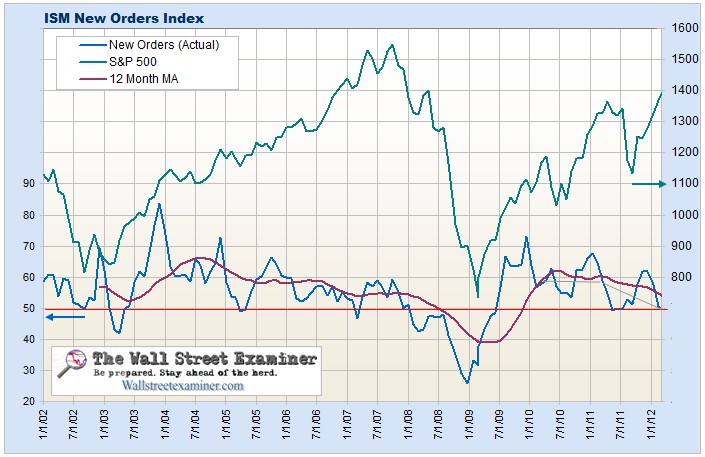 Contrary to the Wall Street punditry happy talk, that chart is downright sad. We got a burst of frantic recovery in 2009, and from there it’s been all downhill, all the king’s horses, all the king’s men,  all the stimulus, and all the Fed pumping couldn’t put the Humpty Dumpty US manufacturing industry back together again.

The growing negative divergence versus stock prices is ominous. Rather than the US manufacturing economy being the engine of worldwide expansion touted by Rupert Murdoch, and Sons, and hackers,  in the pages of the WSJ, and Hizzoner the Mayor on his terminals or our Ipad screens, new orders are clearly down trending. In fact, the pattern since January 2010 looks a lot like the one from January 2005 to March 2007. We know what came after that. This year is not quite as weak, but it’s getting close. If I were a serious investor, I’d be worried about that divergence, and I’d be wondering why the media couldn’t report the story accurately, rather than pumping out garbage and what appears to be pure propaganda.

So the financial media goes on its merry way ignoring the truth. You want the truth, you won’t get it from Mayor Bloomberg, Dow Rupert Murdoch Jones, et. al. They don’t want you to know the truth, because they’re afraid that you just might know what to do with it if you did.