CNN Money  has the following graph showing how the number of troubled banks on the FDIC list has grown during the financial crisis. 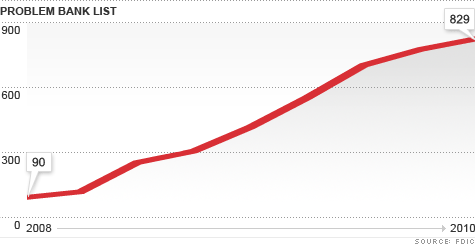 The relationship between the FDIC number and the Calculated Risk list can be seen in the following graph. 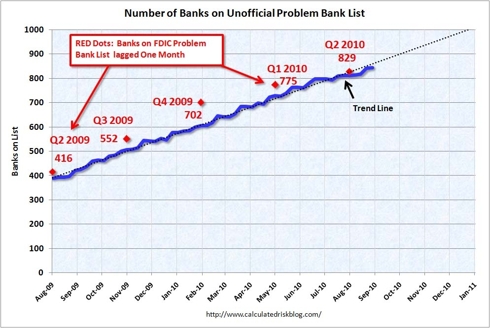 The clear implication is that when the next number (as of Q3 2010) of troubled banks is announced by the FDIC at the end of November it is likely to be between 850 and 900.

The number of banks that have failed under FDIC receivership in this crisis is thus far 307.  See the following graphic from Calculatorplus.com: 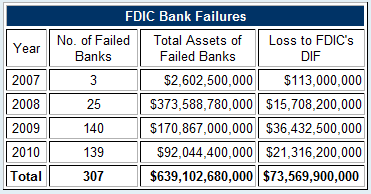 Of course, the FDIC asset total is far less than the total dollar cost of this financial crisis, as was documented last year here and here.

The relationship of the current banking crisis to the size of the economy is more than seven times greater than the worst year of the Great Depression (1933). This crisis is 19 times larger with respect to GDP than the next worst year, 1989, in the S&L crisis.

Now we have to see how the aftershocks and the financial system structure weakened by the “big one” interact in the coming years. I did not say months; it will take years to repair the effects of an event of this seismic magnitude.

These are astounding relationships. We have been and still are in unchartered territory. The Great Depression may not be repeated, but, in some ways, we have exceeded it to the downside. The ability of the U.S.and the world economy to withstand such a shock amazes me.

The above was written in the first year of the crisis, hence the reference to the size of the crisis compared to the worst years of previous crises.

The stress on the banks is now being compounded by questions of just how much of the securitized debt they created and underwrote may be forced back on their books at par when it is found to have been misrepresented and improperly documented as to title.  The current value of much of this debt is far below par.  The exposure of the banks in this regard is pretty much a hooded and unquantified monster this Halloween.

In the words of Robert Frost, we still have “miles to go before we sleep”.  If we add the 894 from the Calculated Risk problem bank list to the 307 already collapsed into the FDIC receivership, the total is 1,201 banks.  This may be half way to the end or it may not be there yet.  Chris Whalen estimated in 2009 that more than 1,800 banks would fail in the current crisis.  The Congressional Oversight Panel chaired by Elizabeth Warren estimated in February 2010 that commercial real estate loans would be problematic eventually for solvency of nearly 3,000 banks.

The bank failure parade may not peak until some time in 2011.  If it doesn’t peak until 2012, then the Whalen estimate will certainly be too low and the Warren panel estimate may come into play.