“….there could be some hidden debt bombs as a recent Bloomberg finding suggests that China’s banks may be understating their exposure to runaway local borrowing by possibly billions of dollars that is raising fears of a government bailout.”

Here are more details.  It appears that, based on a Bloomberg News survey, the construction boom by many local governments as part of China’s stimulus program that started in November 2008 have now become too big to complete and may require a bailout even bigger than the Euro debt crisis.

From Bloomberg and chart below [emphasis ours]:

“Provinces and cities are going deeper into the red to finish projects….With prices dropping in China’s real estate market, economists warn that local authorities won’t be able to repay their debt because of poor cash flow and falling revenue from land sales they rely on for much of their income. 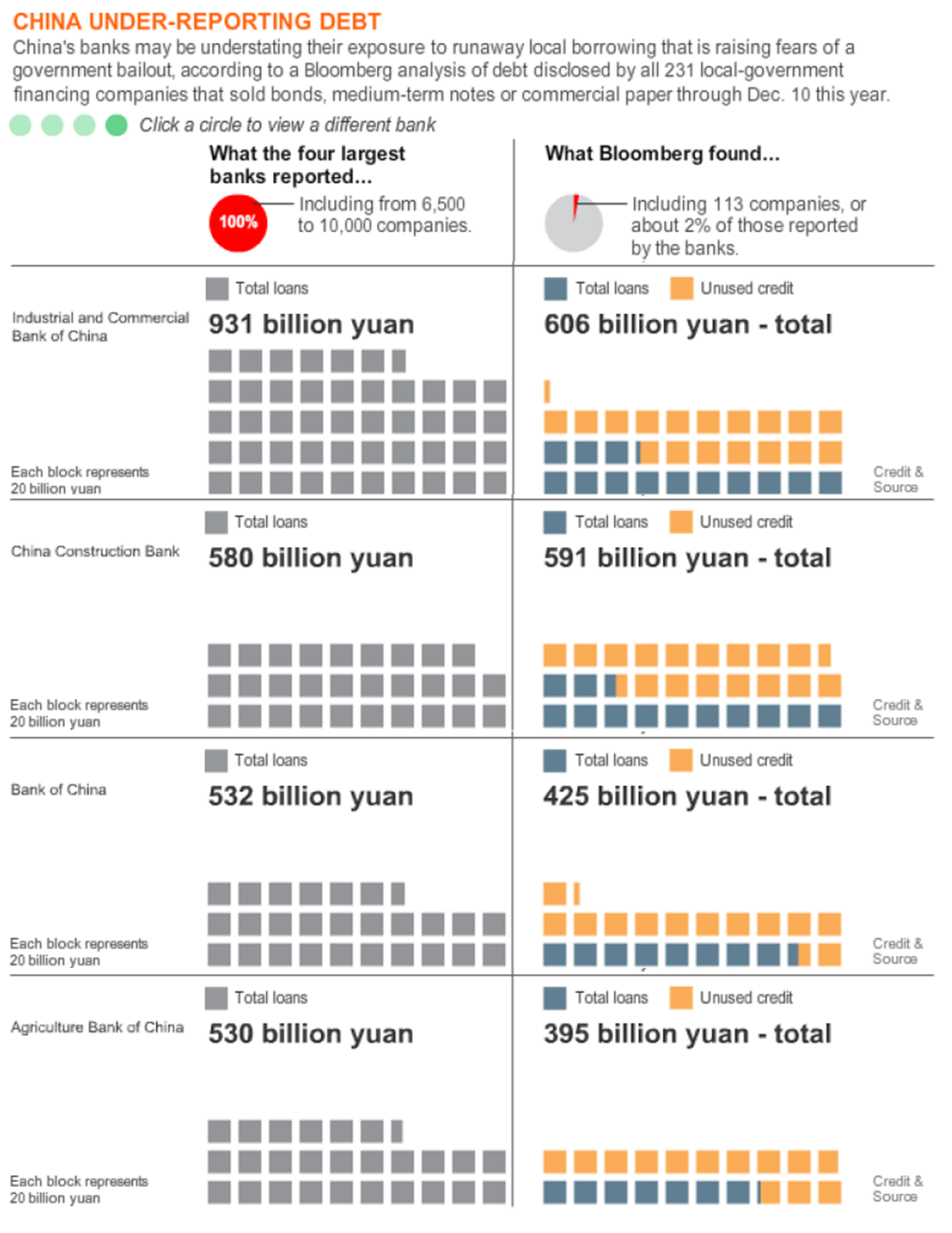 “Local authorities, who shoulder most of the infrastructure spending in China, have to keep borrowing to complete projects so they can generate cash flow needed to start paying debt back, said Vincent Chan, head of China research at Credit Suisse Group AG (CSGN) in Hong Kong.

Yao Wei, an economist at Societe Generale (GLE) SA in Hong Kong, says another 7 trillion yuan of debt ($1.1 trillion) will be needed to finish projects in the government’s five-year plan through 2015.”

In July of 2011, Moody’s also said it found more potential loans by local governments after accounting for discrepancies in figures estimated by China’s state auditor–10.7 trillion yuan of debt. By Moody’s estimate, China’s local government debt burden may be3.5 trillion yuan ($540 billion) larger than auditors estimated, putting banks on the hook for deeper losses that could threaten their credit ratings.

“This indicates that these loans are most likely poorly documented and may pose the greatest risk of delinquency,” said Yvonne Zhang, a Moody’s analyst.

According to FT.com, both Ministry of Finance and Ministry of Railway have experienced increasing difficulties in selling local and muni bonds partly due to concerns about the creditworthiness of local governments.

Fiscal disciplines at local level or a Beijing bailout are two options to defuse the growing debt bombs. Unfortunately, a confluence of factors suggests meaningful lending curb as well as fiscal discipline could not be expected in the near term.  A main factor pushing Beijing’s pendulum towards monetary easing is that China’s export demand is deteriorating with possible zero export growth in 2012; whereas government analysts estimate that China needs annual export growth of at least 15% to ensure stable economic expansion as the rate of domestic investment cools.

Since Chinese local governments, unlike the U.S. municipality, do not have the option of filing for bankruptcy, Beijing most likely would need to do a great bailout of local authorities either in installments or at one fell swoop.

Will this lead to a crisis or hard landing to sink China?  Well, crisis typically forms in stealth and erupts when you least expect it, just like when investors felt safe with subprime mortgage packages being given top credit ratings.  Then the ensuing fear and capital flight would take care of the rest of crash.

In China’s case, alarms on local debts have already been raised by many investment analysts, academia, as well as by the Chinese officials.  Shanghai Composite Index has dropped 21% in the past year suggesting a lot of this risk has already been priced into the markets.

Furthermore, the amount of debt, although a big chunk of change by any standard, is within the reach of Beijing’s coffer.  Instead of a worldwide DEFCON 1 crash alert, China’s central government most likely is already doing some mini-bailouts behind the scene, and would continue to mop up as to ensure stability.  So that means the China Dragon probably will be trapped in the shallow water at least for the next 2-3 years.