Will Business Owners Hit the Bid in 2012?

Over the years one of the best indicators of M&A activity has been what I call the Free Lunch Index. I live in Memphis, normally not a hotbed of middle market M&A activity. That’s why my practice is national in scope. When banks or private equity groups do come to town looking for deals, I often get a call for lunch, breakfast or coffee.

Since the crash in 2008 it’s been fairly lonely out here and I pretty much buy my own lunches. Starting this month, however, I’ve seen a marked pickup in calls and lunch invitations. The word appears to be out among both the private equity groups and the financial institutions that now is the time to get back into the market and they’re actually spending money to look for deals.

Our experience at Focus indicates that business sale interest has increased strongly since yearend. Apparently we are not alone. Cyprium Partners, a leading mezzanine financing specialist, recently completed a survey of 175 investment-banking firms throughout the U. S. Among their findings, 44% of respondents reported more assignments signed or in the market than at a comparable time in 2010. 56% reported that new business pitches were up and less than 10% of the firms reported lower activity. Bottom line the M&A business is improving and that’s consistent with our belief that the overall economy will surprise to the upside.

It’s no secret that the U. S. private equity industry has been in a depression over the past three years. 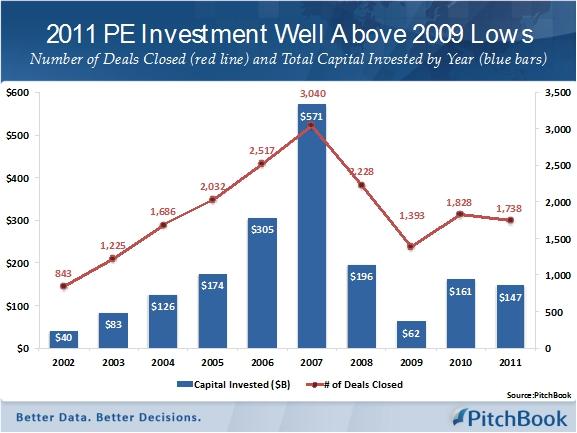 Private equity deal flow showed great promise this time last year, but fell precipitously by the end of 2011. Interestingly, according to Capital IQ, global aggregate annual deal flow in terms of number of transactions has been far more stable while dollar values have fluctuated widely.

A pent up demand for business exits is driving transaction numbers, but in recent years most of our deals have been strategic in nature rather with only a few private equity buyers. For years buyers, particularly in the private equity community, have told us they were waiting for business owners to “get more realistic” in their pricing expectations. That wait appears to have ended in 2011 and it was buyers, not sellers that blinked.

That is consistent with our experience. Buyers are paying historically high multiples for good companies.

Underlying all of these numbers is a single reality. Private equity transactions, far more than strategic deals, are driven by the availability of financing. From 2005 to early 2008 the M&A market thrived on the creation of massive amounts of debt in the Shadow Banking system. Many billions of dollars of collateralized loan obligations (CLOs) and other off balance sheet funds were created to chase deals. That game ended abruptly with the crash and has not come back. Leverage is an absolute prerequisite for the private equity community; PEs cannot achieve their target yields with equity heavy balance sheet structures. As a result the larger leverage driven deals have been few and far between.

There are some signs that the financing picture is changing. 2011 saw strong resurgence in both the high yield debt markets and middle market loan syndication activity. Both markets fell off somewhat in the fourth quarter as traders evaluated the possibility of world financial markets again falling off the rails as a result of the European crisis, but there are signs that the corporate debt markets are rebounding.

As we have previously written, world monetary authorities appear committed to avoid this outcome at all costs and 2012 will likely see a binge of deficit monetization throughout both the western and the Asian economies. The liquidity they are creating is beginning to show up in loan statistics and, increasingly we are hearing from bankers that they are anxious to make loans. In contrast to prior years the word “good” does not always precede the word loans in those conversations. Past experience says that such a shift in thinking will lead to a lowering of underwriting standards and a return to cash flow based lending by the banks. When that happens “Katy bar the door” – we’ll be in for a wild ride indeed!

So what does this mean for business owners and for the markets? Without sellers there can’t be an M&A boom and for several years most owners have been hunkered down rebuilding their balance sheets and profitability. They’ve been reluctant to come to market with their businesses for fear that multiples would be too low or that they would be measured against mediocre earnings. For a number of reasons we believe that may change this year.

In other words if you have owned stock in a public or private held company for at least a year and you don’t sell it before January 1, 2013, the gain will immediately be worth 13.3% less after-tax.”

If we are right and pressures are building for a significant increase in M&A activity, what does that mean for the markets? In our experience M&A booms are generally very good for equity markets. Business sales free up capital that requires reinvestment. This has a direct and immediate impact on equity markets as investors watch prices of publically traded targets jump and begin to look for other potential targets in which they can invest. It also happens over time as sellers invest a portion of their sale proceeds in their public equity portfolios. Additionally buyers are often able to leverage acquisition programs into a market perception of corporate momentum and increased value. As this feeds upon itself, multiples expand with a symbiotic impact on the IPO market. This was true in the early 1960s, the early to mid 1980s, the late 1990s and the mid 2000s. Of course these episodes did not always end well and cycles are far more compressed now than in the past.

At this point everyone wants a party. When it begins enjoy it while you can: the hangover will be a doozy.