The IMF (International Monetary Fund) has published a report which covers a number of details about the Great recession.  One area that was explored was the relationship between structural unemployment, as defined by the IMF, and increased foreclosure activity in the U.S.

Two data sets that I find interesting in the report are summarized by the following graphics: 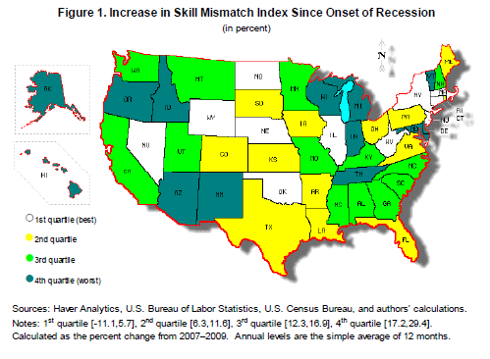 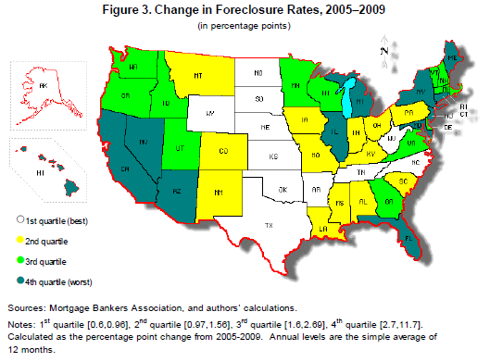 We will refer to skills mismatch as the structural unemployment problem for the rest of this article.

Looking at the 13 states with the biggest changes in foreclosure rates, the structural foreclosure problems are quite varied:

This indicates that structural unemployment problems might not have much correlation to increases in foreclosure rates.

However, when we look at the entire matrix of results in the following table, we come to a different conclusion. 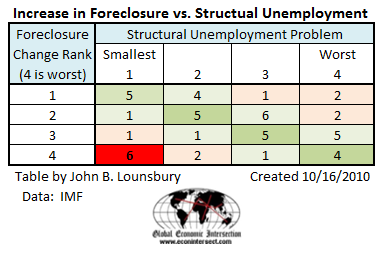 The total for all 16 cells in the matrix is 50.  If the correlation of structural unemployment were perfect the total of the four diagonal cells (dark green) would be 50 with some mixture of two 12s and two 13s.  The larger the numbers farthest off the diagonal become (red and dark red), the smaller the positive correlation.  If all 50 data points end up in the red cells there would be a negative correlation.

All the red cells are much below the 3.11 random average, except for the dark red cell.  For some reason not related to structural unemployment problems there are six states that fall in the worst quartile for mortgage foreclosure increases.  Again, these states are:  Nevada, Illinois, New York, New Jersey, Connecticut and Rhode Island.

So there seem to be some exceptions to structural unemployment always being correlated to foreclosures rates, or in the above case, changes in foreclosure rate during the Great Recession.  What about the relationship between unemployment rate and foreclosure activity?  That question is addressed in the following graph: 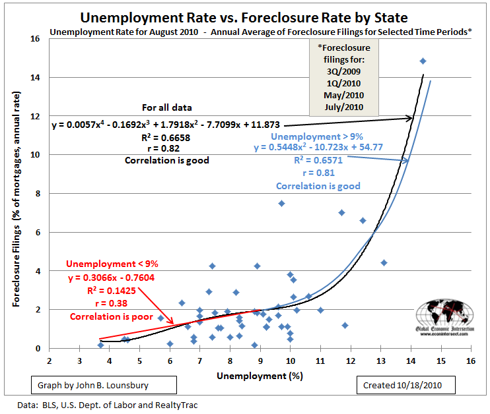 The annual rate of foreclosure activity was calculated from an average of data reported by RealtyTrac for four different time periods over the past 15 months.  The data for each time period was annualized before averaging.

The unemployment rate for each state was for August, 2010.

The conclusion from this graph can be summarized as follows:

1.  Below about 9% unemployment there may be a weak linear effect on foreclosure from the level of unemployment.  However the correlation is poor.

4 replies on “Unemployment and Foreclosures”