For those of us who track the macro-econometric behavior of consumers, the past six or seven months have been (at best)

challenging. Just teasing out a “macro” behavior has been difficult, with wildly conflicting signals proving to be the norm. In retrospect, even the time-honored surveys of holiday retail activities are now proving to have been somewhat optimistic — suggesting incidents of wishful cheer-leading.

What’s going on? Why do we have such mixed signals?

Our answer to those questions is relatively simple: mixed signals generally indicate models that are no longer working; where paradigm shifts have rendered the underlying assumptions inaccurate — if not irrelevant. Extreme or historically unprecedented circumstances can break any model, and persistent extremes can even challenge the underlying economic dogma.

(One of the more glaring examples of a model breaking down is a popular economic “leading index” which has been premised (and heavily weighted) for years on the assumption that the money supply (M2) and the yield curve manipulations of Messrs. Volcker/Greenspan/Bernanke accurately presage changes in economic growth — an assumption that even the publisher of that index now admits had flaws.)

We believe that the situation with U.S. consumers is to some extent too complex for “macro” modeling. At the heart of the complexity are 100 million households that are each uniquely impacted by circumstances and who react uniquely to their various plights. We believe that the past five years have not been a fully shared experience, and that the policy responses of government over that time span have only amplified that disparity.

Furthermore, we believe that the ongoing acceleration of the speed with which cultures evolve or people communicate and transact have caused economic paradigms to shift faster than even the most nimble survey or model can handle. Among the obvious questions: what currently constitutes the paradigm for the household that a “household survey” is designed to sample? (And how do you reach a full cross-section of those households — especially if some only communicate via Twitter?) Or perhaps more importantly for certain key statistics: what is the distinction between being unemployed and “going back to school”? Between unemployment insurance and student loans? For five years this economy and society have been in flux and turmoil in ways that don’t lend themselves to “macro” treatments or generalizations.

At the Consumer Metrics Institute we have been fortunate enough to be able to measure the aggregate behavior of a certain demographic: consumers who are purchasing discretionary durable goods on the internet. Several years ago we were confident that such data could serve as an adequate proxy for the “macro” behavior of U.S. consumers — and for the larger part of the U.S. economy as a whole, since consumers represent some 70% of that economy. For the reasons outlined above, we are now far less certain that any “macro” behavior actually exists or can be extracted from the economic turmoil.

But for exactly those very same reasons — particularly the rapidly evolving nature of households, communications and marketplaces — we believe now more than ever that our data comes closer to documenting the real-time economic turmoil than any of the orthodox surveys or governmental data series.

For whatever reason, our data for aggregate consumer demand for discretionary durable goods surged during June and July, plateaued for a couple of months before retreating slightly at the end of the year: 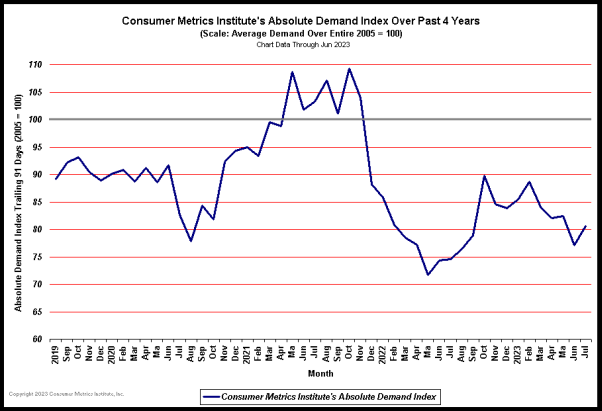 When we say “whatever reason” we know that there are roughly 100 million variations on those reasons, representing the 100 million or so U.S. households that are to some extent economic “loose-cannons” doing whatever makes the most sense for them. We also know that our data is early (i.e., far “upstream” from an economic standpoint), and we suspect that the early third quarter surge we saw explains the stronger consumer expenditures reported in the 3Q-2011 GDP reports.

The daily version of the above chart shows the normal holiday patterns: 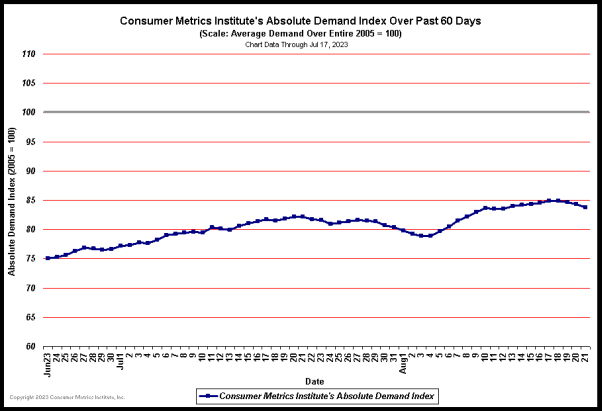 What the charts don’t show, however, is the surge of returns experienced by brick-and-mortar retailers. Anecdotal reports in the media indicated that the returns were prompted both by shoppers trying to cash in on deeper discounts as the season progressed and by “buyer’s remorse” when the euphoria of the “Black Friday” deals turned into budget realities. We expect that another form of “buyer’s remorse” will be felt during the first quarter of 2012, when the reality of contracting real pay will result in 4Q-2011 gains that were merely moved forward from a weakening 1Q-2012 consumer sector.

Meanwhile, autos have continued to be strong: 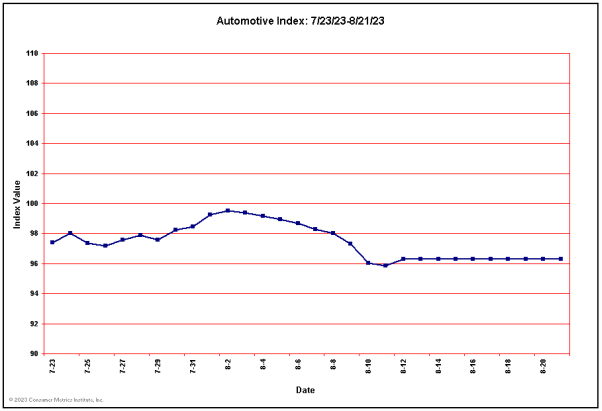 The domestic badges have had a demand curve that clearly shows the July surge we have remarked about earlier: 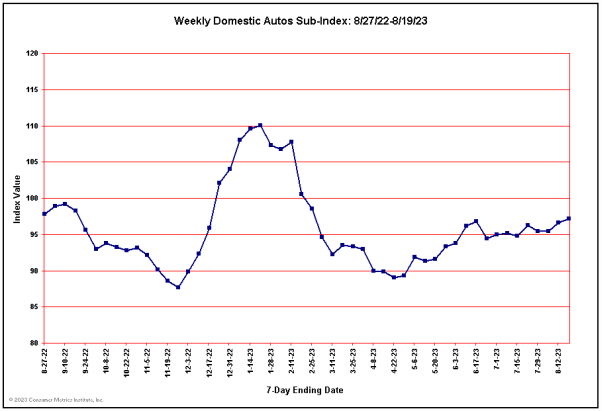 And to continue our theme that recent economic circumstances have not been a fully shared experience, consider the differences between the 52 week charts for Economy brands and Luxury brands: 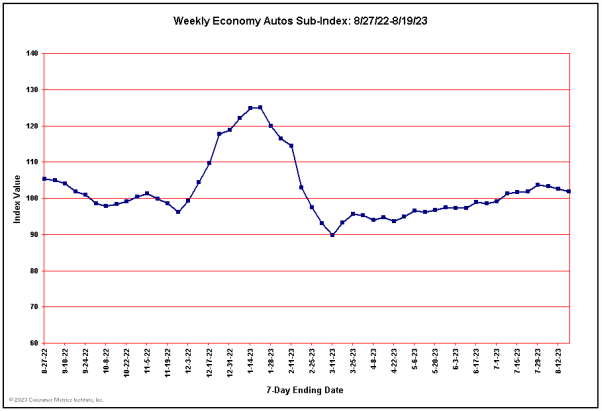 The Economy brands demonstrated a milder form of the third quarter surge, and they have done reasonably well on a year-over-year basis. But the Luxury brands show a distinctly different pattern — particularly of late.

What Caused the Third Quarter Upturn?

We might transform that query into a more focused question: where did the money come from? Given that real per-capita disposable income contracted over that time span, the likely other sources for the money funding the 3Q-2011 upturn might include:

Among the funding sources listed above, the one with timing that best correlates to our 3Q-2011 data surge is gasoline pricing. Unfortunately, it is also the funding source most exposed to exogenous shock and the one most likely to vanish during 2012.