From time to time we have been asked whether we consider the current contraction in consumer demand to be the second “dip” in a “double dip” recession. From a qualitative perspective, we believe that the “Great Recession” is not so much a “double-dip” as a single “big-scoop” that changed character somewhere in the middle. We understand that the NBER says that the recession ended in June 2009. However quantitatively/technically correct that may be by NBER standards, by “Main Street” gut-feeling standards the NBER assertion is somewhere between questionable and ludicrous, depending on the personal circumstances of the observer.

Our data indicates that the consumer portion of the “Great Recession” unfolded (and is still unfolding) along these lines:

► The recession most likely started with a drop in consumer confidence, triggered by bad financial news (Bear Stearns, Lehman Brothers, etc.) and media coverage of the “Housing Crisis”/sub-prime loans.

► The initial recessionary downturn was accelerated by political uncertainties in 2008 and rising energy prices.

► An organic recovery started late in 2008 when energy prices collapsed, lasting well into 2009 with help from short term stimuli (“Cash for Clunkers” and the Federal New Home Tax Credit).

► During 2009 (and now deeply into 2010) a ruthless corporate obsession with short term earnings exacerbated the already weak employment picture, even as equity markets recovered.

► By late summer 2009 consumers realized that this was not a “garden variety” recession, as unemployment persisted and fixed incomes plummeted.

► By early 2010 demographically appropriate “frugal” consumer habits had emerged, reducing discretionary spending in favor of increased personal savings (or the paying down of debt). 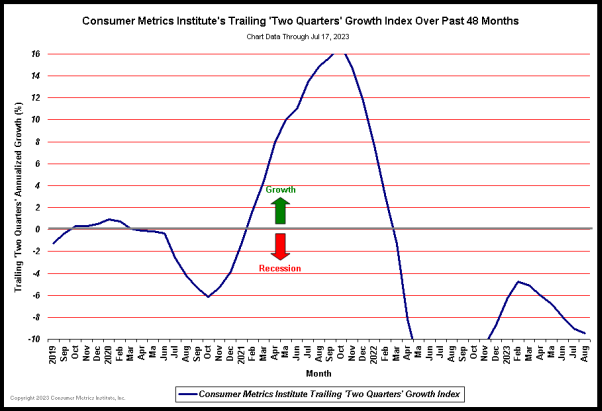 Credit the growth spurt in the middle of the above chart to a combination of dropping energy prices, consumer shopping reverting to form after a brief hiatus, positive psyches as a result of a honeymoon with the new administration, and the consumer oriented parts of the stimulus packages. All that changed when consumers realized (in late 2009) that things were not actually getting any better.

But missing from the above narrative is the potential permanence of the damage inflicted on certain consumers. Those consumers living through foreclosures will have suffered lifestyle and financial reversals that may require a decade or longer to rehabilitate. And even those fortunate enough to stay current with their mortgages may have had their dreams of upward mobility (or mobility of any sort) crushed. In both of these cases the damage will have caused changes in habits (the “new frugality”) that could last decades, if not the rest of their lives. The “Great Depression” of the 1930’s changed an entire generation’s attitudes about banks and spending permanently. While this economic strife may not be as severe, the emotional scars may persist longer than policy makers might wish.

Also absent from the above narrative is the impact of the Federal Reserve’s extended “zero rate” policy on those attempting to live on a lifetime’s modest accumulation of wealth. On Wall Street and inside the Beltway there are no perceived victims of low interest rates, because low rates result in obscene spreads between the real cost of institutional borrowing (essentially zero) and the real rate of consumer lending (18% to 24% on real-world short term loans). Meanwhile every barrier possible has been raised to prevent those lower rates from propagating to those most in need of longer term relief.

Lost on the policy makers is the fact that what’s good for banks is not necessarily good for their depositors. Simply stated, it has become impossible to live on the earnings generated by a lifetime of middle class savings. In June 2007 an accumulation of $2,000,000 in an IRA or 401K would translate into $100,000 in annual income when invested in 1 year T-Bills, an annual income higher than the per capita income in any of the richest nations on earth. That was certainly a reasonable target for a middle class household, and one that would allow a comfortable retirement without significant changes in lifestyle.

Today the same $2,000,000 (if it was somehow preserved throughout the “Great Recession”) would earn $4,200 per annum if invested similarly — or roughly the per capita income in the Republic of the Congo. No wonder that many “Baby Boomers” are increasing savings and postponing retirement to the chagrin of younger people desperately looking for jobs; the alternative is a third-world lifestyle.

One reply on “What is This – Slow Recovery, Double Dip or One Long Recession?”