Ratings agencies have been criticized for inadequately determining risk in the massive collection of debt securities created in the credit bubble.  A second major problem in the mortgage securitization process is the existence of holes in the legally required filings of mortgage documents.

Construction of AAA Securities out of Junk

An excellent example of credit rating alchemy is found in an NBER (National Bureau of Economic Research) study by Harvard professor and NBER member Efraim Benmelech.  The following graph is from that report. 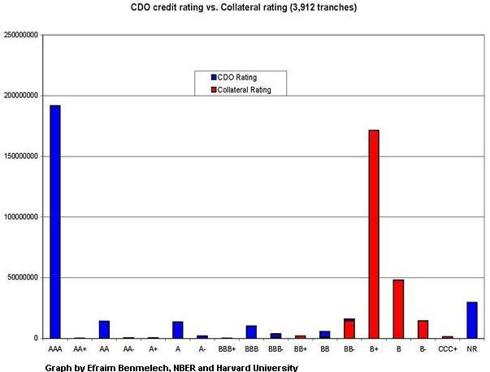 One might argue that it is possible to take a large number of riskier things together and have the assemblage bear less risk than any individual part.  But turning 100% junk into AAA?  That does seem a bridge too far.

That bridge too far was built on a set of assumptions about the level of mortgage defaults that were possible.  In the halcyon days of 2005 and 2006 there was not a clue that mortgage defaults much above the historic level less than 1% could ever occur.  As seen in the following graph from Loan Processing Services, foreclosure rates ~7-10 times historic norms have been experienced.  The credit risk assignments based on historic default rate assumptions have resulted in gross under estimation of losses.

The CDO (collateralized debt obligation) tranching process is one in which the issuer designates (and rating agencies certify) a hierarchy of credit quality with some tranches deemed to be of lower credit quality.  Defaults are realized first in the lowest rated tranches.  The assertion of the issuer and rater are that the risk of default of the highest tranche is comparable to U.S. Treasuries because defaults will be assumed by the lower tranches before the AAA tranche is affected.

In the above illustration 70% of the CDOs were rated “risk free” (AAA).  Up to 30% of the underlying securities could default without imposing any loss on the top tranche.  Or so the issuers and rating agencies said.  However, when securities contained in a CDO are largely sub-prime the problem is magnified; sub-prime default rates have been up to four times the overall rate.

The entire alchemy rests on some basic assumptions.  In order for credit enhancement to occur the individual risks in a CDO must be independent from each other.  If the risks are closely correlated, then building a CDO simply projects the same risk as exists for each component.  In the example illustrated 89% of the CDOs were rated  BB and higher, while 99% of the collateral was rated BB- and lower.  That is major enhancement.

The assumption of independent risks was flawed.  The first reason was failure to fully recognize systemic risk.  It simply was not considered that a collapse of 30% or more in home prices could occur.  In addition it was simply not considered that money center banks could become insolvent as a group.

The second flaw came from concentrating similar types of debt.  Originally RMBS (residential mortgage backed securities) CDOs were comprised of a diversified pool of mortgages.  As time went by more RMBS became more concentrated on riskier mortgages, such as sub-prime and other non-prime loans.    These became further concentrated as many CDOs were themselves composed of collateral that were CDOs.  (See later discussion on pyramiding debt.)  Benmelech writes:

While initially ABS CDOs were diversified and collateralized by assets from a variety of sectors, they became more concentrated over time.

The pyramiding of debt also enhances risk.  Consider that the lower tranches of the CDO illustration.  Now repackage them into a new CDO.  The process could now elevate 70% of the former junk (the lower 30% of the original CDO) into AAA.  The second level CDO adds 21% of the original collateral to the AAA pool.  That brings the total up to 91% AAA.  After three levels in this example with 30% below AAA remaining after each level of collateralization, 97% of the original junk has been transformed into AAA.  Alchemy indeed!

Note:  The preceding example is illustrative of concept, not a specific process.

Losing Track of the Creditor for Mortgages

We have developed a picture above that also reflects on the current foreclosure documentation crisis.  In the first graph it is seen that the pool of mortgages that entered the illustrated security were put 70% into a AAA tranche.  Question:  Which mortgages were put into that tranche?  Answer:  You don’t know until the defaults occur.

Yves Smith has discussed this trail of documents problem in detail (see Related Articles end of this post).  Mike Konczal (Rortybomb) has written an excellent series that discusses the securitization process and the legal/financial documents involved.  The following diagram by Mike illustrates the securitization process (without the tranche development details discussed earlier in this article):

As Mike points out, there are two separate filed documents (filed at local and county property and deed offices) associated with each mortgage.  Both of these documents must be properly transferred through all intermediate hands to the trust.

As Yves Smith has described, there can be many intermediate hands and every intermediate transfer must be separately recorded in the local deed office.  An organization (MERS) was formed to electronically track these recorded transfers.  What apparently has happened is that some of the transfers were not properly recorded at the local level and therefore the electronic records at MERS point to documentation that does not exist.  The document trail between the original mortgage and the trust has been broken.

The result of this mess is that foreclosure proceedings do not have a complete set of documentation to establish that the trust has standing to foreclose.  A large cottage industry has sprung up “recovering” missing documents.  This recovery often involves outright fabrication of missing documents or fraudulent affidavits.  MERS, the electronic tracking system, has actually filed as principal agent for foreclosures.  Apparently some of these foreclosures have been successfully completed, but others have been disallowed by diligent judges.  See reviews by Ellen Brown.

Why are we Surprised?

It is not a surprise that a financial collapse occurred.  It is a surprise that the causes are so simple.  It is a surprise that those responsible for this mismanagement of the basic concepts of debt and collateral have been left in control of the system and can continue to practice their alchemy.  Just how complex the ongoing relationships have become in this matter have been outlined by Felix Salmon.  Felix has recounted how major legal problems have arisen for Bank of America from the mortgage mess they assumed when they bought Countrywide.

And then there is one final note.  Karl Denninger is trying to follow up on reports that securitizers sold the same mortgage multiple times.  Just how weird can the possibilities in this mess get?

The Mortgage Mess by Yves Smith

4 replies on “The Alchemy of Securitization”