There is an embarassing (for Americans) graphic at the 5-Min. Forecast: 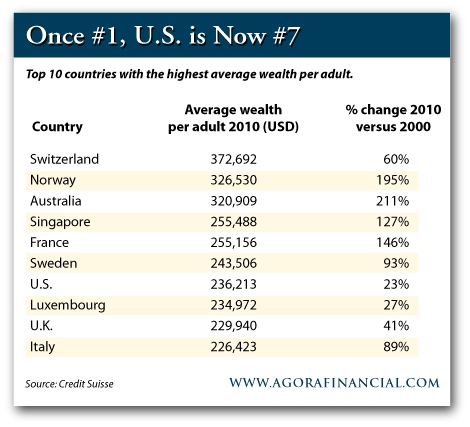 The “socialists” are gaining individual wealth at a much faster rate than the “capitalists”.  Wow!

But this average wealth number is only the first on a list of 24 disturbing factors for Americans posted by Michael Snyder at Daily Markets.

#2 The United States once had the highest proportion of young adults with post-secondary degrees in the world.  Today, the U.S. has fallen to 12th.

#3 In the 2009 “prosperity index” published by the Legatum Institute, the United States was ranked as just the ninth most prosperous country in the world.  That was down five places from 2008.

#4 In 2001, the United States ranked fourth in the world in per capita broadband Internet use.  Today it ranks 15th.

#5 The economy of India is projected to become larger than the U.S. economy by the year 2050.

#6 One prominent economist now says that the Chinese economy will be three times larger than the U.S. economy by the year 2040.

#7 According to a new study conducted by Thompson Reuters, China could become the global leader in patent filings by next year.

#8 The United States has lost approximately 42,400 factories since 2001.  Approximately 75 percent of those factories employed at least 500 workers while they were still in operation.

#9 The United States has lost a staggering 32 percent of its manufacturing jobs since the year 2000.

#10 Manufacturing employment in the U.S. computer industry is actually lower in 2010 than it was in 1975.

#15 The U.S. trade deficit is running about 40 or 50 billion dollars a month in 2010.  That means that by the end of the year approximately half a trillion dollars (or more) will have left the United States for good.

#18 According to a new study conducted by the Economic Policy Institute, if the U.S. trade deficit with China continues to increase at its current rate, the U.S. economy will lose over half a million jobs this year alone.

#19 American 15-year-olds do not even rank in the top half of all advanced nations when it comes to math or science literacy.

#21 The United States has the third worst poverty rate among the advanced nations tracked by the Organization for Economic Cooperation and Development.

#22 Since the Federal Reserve was created in 1913, the U.S. dollar has lost over 95 percent of its purchasing power.

#23 U.S. government spending as a percentage of GDP is now up to approximately 36 percent.

#24 The Congressional Budget Office is projecting that U.S. government public debt will hit 716 percent of GDP by the year 2080.

Perhaps taxation is a factor.  The following table shows data from  the OECD: 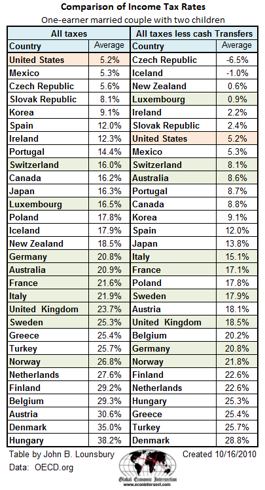 The median family income has tax levels as shown in the table according to the OECD.  My estimate for the U.S. entry, using the median family income for 2009 of $50,000 (U.S. Census, rounded number) and the 2009 IRS tables for tax rates, standard deduction and personal exemptions, is that the tax rate should be 6.9% of gross income.  However, if my number is used the U.S. only moves down three places in the left hand table and only two in the right hand table.

Maybe it is the top marginal income tax rates that are causing the U.S. to fall lower on the personal wealth scale.  The table below looks at that data.
Click on table for larger image.

The range of top tax rates in the table of top ten personal wealth countries starts at 38.9% and goes up to 56.5%.  The U.S. is right in the middle of this distribution with a top statuary rate of 41.9%.

There is no indication in the top marginal tax rate to indicate why the U.S. should be losing ground to the countries above it on the personal wealth list.  The top statutory tax rates are very similar.

The data summarized in the table on the left is from the OECD.  Historical U.S. tax brackets can be found at taxfoundation.org.

We are forced to conclude that personal income taxation is not the reason that the U.S. is losing ground in the personal wealth accumulation race.

Another factor that would logically have a relationship to personal wealth creation is savings rate.  In the table below the data on savings rate from the OECD is shown for 2007, the last year that data was reported for all countries, and for 2008.  Here we finally have hit a significant relationship. One of the causes of declining personal wealth growth in the U.S. compared to other top countries may be partly a result of the savings rate which is dramatically below many of the other top ten in the table.

The U.S. not only had a significantly lower savings rate than other top 10 personal wealth countries, it also had the steepest decline in savings rate.  The only larger declines in savings rate were in three of the most economically stressed countries in the financial crisis.

2 replies on “Is Socialism Winning the Wealth Game?”