According to the classical economists David Ricardo, John Stuart Mill and others, there are three components of capitalistic economies: land, labor capital and financial capital.  In this article we will focus on the second and the third.

Here are two interesting graphics from chartoftheday.com which give two factoids: 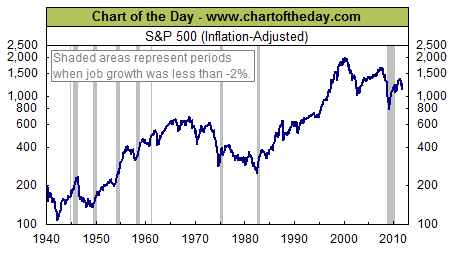 Let’s look at the stock chart first.  When we look at the market history as graphed by my colleague Doug Short, we can make some interesting observations: 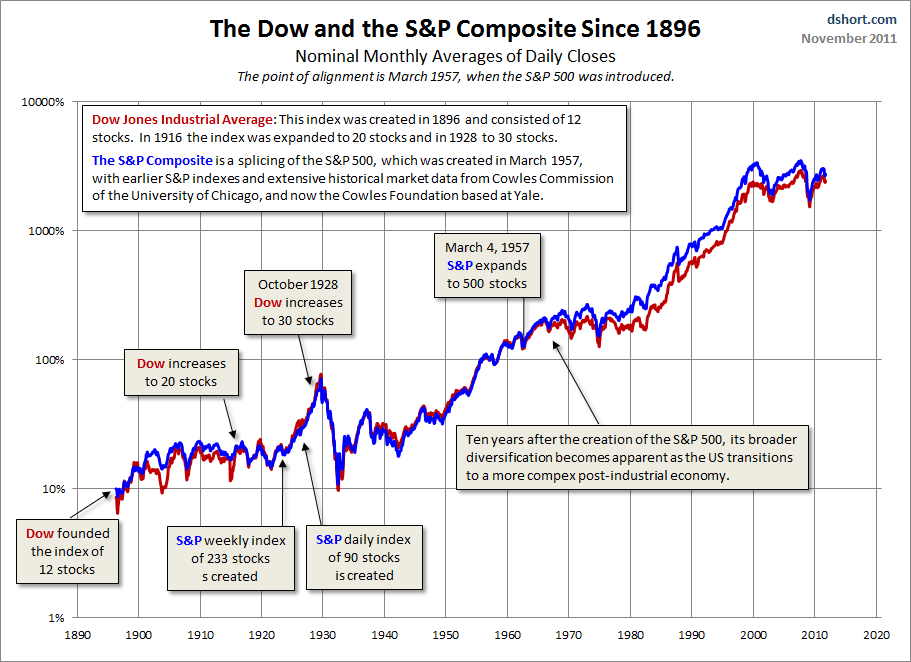 It is tempting to make a guess that the current “flat period” could end at any time now that we are reaching the end of the minimum interval for the three prior periods.  However, the increased volatility, if it continues, means that making an inaccurate guess can lead to large losses in a short period of time.  What if these large market swings continue for another ten years (to match the longest duration for a “flat period”)?

It seems that it is a much better time to be a trader than an investor and will stay that way until the final inflation adjusted bottom is in for stocks, which it may or may not have yet occurred on March 9, 2009.

Looking at the second chart from chartoftheday.com, it seems that something happened to labor starting in 1984 – The growth rate in employment has established a 27-year down-trend since then.  The context of this is better understood by looking at a graph I posted in a working paper a month ago examining the long-term history of private investment: 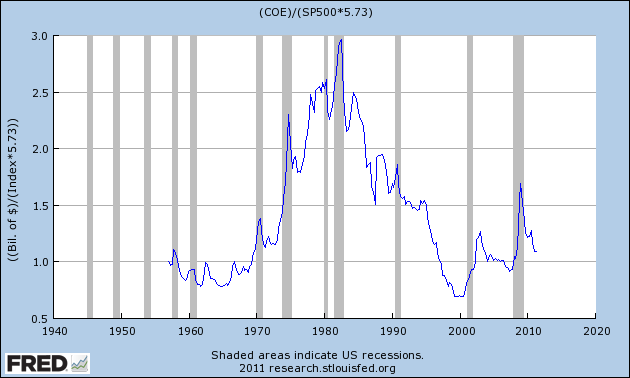 This graph shows the ratio of compensation for employees divided by the value of the S&P 500, normalized to 1957 = 1.0.  It shows the dramatic growth of returns to labor capital relative to financial capital during the 1970s and the equally dramatic resurgence of return to the finance side relative to labor since.

Since the extreme in 2000 there has been an apparent return toward a more favorable return for labor capital, during which time the ratio has been near the 1957 value, with the exception of the spikes attributed to the two bear markets of the 21st century.

There has been a strong driving force behind both of the moves (1) to the 1982 peak in advantage to labor capital and the subsequent (2) resurgence of advantage for financial capital:  Labor productivity.  This can be seen in the following graphic, from the same working paper: 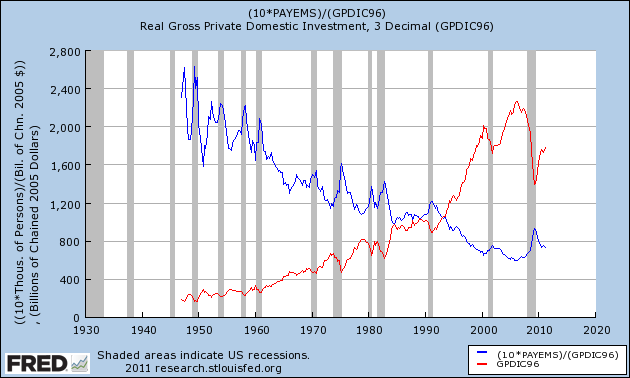 From the working paper:

…we look at the systematic decline in employment growth per unit of investment over the entire 50-year period covered, even as real investment generally grew and then accelerated from 1980 to 2000.

Since 2000 the productivity improvement has been nearly flat (on average), similar to the 1980s.  These where the only two periods since World War II that productivity has had a significant period where improvement failed to be realized.  There is a difference between the two periods, however.  In the 1980s private investment continued to grow;  in the 2000s it has declined, even though there was “bubble” 2003-2006.

This leads to the question of whether further private investment will occur now that the late 20th century virtuous cycle of labor productivity may have ended.  Further commentary from the working paper:

The executive of 2011 has grown up through the bountiful years of the 1980s and 1990s.  Then he (she) has had his (her) teeth rattled and hair turned gray (or lost) by the economic turmoil of the 21st century.  Markets for their products are very uncertain and productivity growth is evaporating.  The potential for capitalization growth is also uncertain – there have been two vicious bear markets this century and they are preconditioned by recent experience to fear another.

One more sad part of all this is that not only is capital under stress, the lower level of productivity improvement does not appear to be producing a better situation for labor either. Right now there are no winners.

Starting from two interesting graphics from chartofthe day.com a discussion has developed that raises questions about just when the current 11-year period of flat returns for stocks (negative real returns) will end.  The 27-year decline in the rate of employment growth compounds the question about stocks.  It appears that a half century long labor productivity improvement may have ended, or at least been suspended.  Private investment, which could be a means of breaking out of the productivity malaise, has been declining over the last decade (with the exception of a 3-year bubble which has been completely collapsed).

The macro forces that could drive the U.S. economy (labor capital and financial capital) are currently in disarray.  Further growth for U.S. companies must come from growth overseas and from further “resource optimizations” (read lay-offs).  The questions about the potential for the global economy are myriad at present.  The bottom line is that there must be some new micro events within the U.S. that could spark new economic activities to awaken the moribund labor and finance capital potential.

Where will the next cycle driver come from?  Engineering friends have told me it will be the development of plentiful and cheap energy sources which can have an efficiency and cost reduction benefit driving a macro scale expansion.  The same engineering friends have not told me specifically how this would be accomplished.  So there is a lot of uncertainty here as well.

Private Investment: Between a Rock and a Hard Place by John Lounsbury