The past two weeks have resulted in one of our rare “wow” moments here at the Consumer Metrics Institute. On July 19 our Weighted Composite Index defied recent history and reached a single-day record level of year-over-year growth before subsiding slightly since:

What is more amazing is that this followed hard on the heels of a retested record low in our trailing 91-day “quarter” average of that same index on May 29th and 30th. That moving average is our “Daily Growth Index,” and it has soared almost parabolically over the past 50 days from a -6.76% contraction rate to one now in the vicinity of -2.5%: 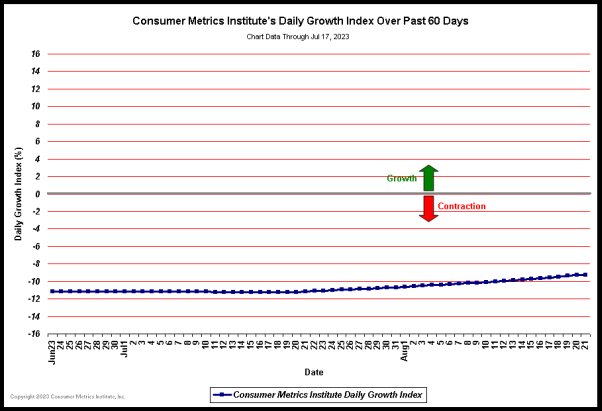 We find that one of the best ways to keep all of this in perspective is to monitor our “Contraction Watch”:

The above chart follows the course of our Daily Growth Index (actually just a 91-day moving average of the Weighted Composite Index, converted from the base 100 index to a +/- percentage) since that index first went into contraction (on January 15, 2010 — now nearly 560 days ago). The chart also shows what the Daily Growth Index was doing during the consumer contraction that occurred within the formally defined “Great Recession” of 2008-2009. The progress of each event is recorded as a track of Daily Growth Index values commencing on the left margin on the date that the index first went into contraction.

Compared to our situation less than two months ago this transition is visibly game changing:

— Two months ago we could not see in the above chart any movement that could conceivably result in an early end to the current contraction event. That is no longer true.

— Two months ago we expected that any moderation in the current contraction event would result in a lingering plateau in the region between a -2% contraction rate and a -3% rate. We have just reached the midpoint of that range and the upward movement is still substantial. While we can’t rule out a still-contracting plateau, any such plateau is likely to be at a lower level of contraction than what we had previously expected.

We measure quantitatively activities in the on-line consumer marketplace for discretionary durable goods. Our methods involve the quiet collection of data unwittingly left behind by shoppers. As a consequence we don’t ask consumers why they are doing what they are doing. In fact, our recent data surge is in direct contradiction to polls which do ask precisely that question, particularly those recently conducted by The Gallup Organization — which indicate that in June and July consumer confidence was dropping (if not plunging) from a -26 reading to a -41 reading.

Divergences can be informative, and this one brings several points to mind:

— Year earlier consumer demand was very weak, reaching lows not seen previously since November 2008. As a consequence, current year-over-year comparisons will be strongly positive, even if actual absolute demand has only returned to long-term “normal” levels. By the way, that year-earlier demand will remain weak through the middle of August, likely resulting in an extended current excursion into year-over-year growth territory in our Weighted Composite Index — pulling our Daily Growth Index even higher.

— Consumer confidence responds to far more than pure economics. At the present time there are ample other political and employment reasons for longer term consumer gloom even as the recently declining gasoline prices may be allowing increased discretionary spending. Other events (e.g., initiating strategic mortgage defaults) can also have positive impacts on the cash available for durable goods while still hammering long term confidence.

— We have always been aware of potential biases built into our sampling methodologies, particularly those that are demographic in nature. And we have also built into our technologies measures to correct for the inexorable long-term market shift from brick-and-mortar stores to on-line merchants. We have even criticized other pundits for blaming short-term retail downturns on regional blizzards, particularly when our nationwide data for at-home shopping was showing the same downturn. But one of our Members (thank you, Dave) dropped us a note suggesting that the current heat-wave in the U.S. might be causing a short-term distortion in the market-shift as consumers avoid heat plagued traffic to and from the malls. We will need to wait to see if the the retail numbers for July confirm his suspicions.

— Finally, whatever is happening with durable goods over the past few weeks will not effect the industrial portion of the GDP until the fourth quarter of 2011. We would not expect either the imminent 2Q-2011 GDP numbers or the later 3Q-2011 data to be anything other than lethargic, at best.

The Consumer Continues to Get Stronger by Rick Davis

The Conference Board: Economic Indicator Continues to Rise in June 2011 by Steven Hansen

Nice Rebound for Business Sales In May 2011 by Steven Hansen

Nice Improvement in Wholesale Sales in May 2011 by Steven Hansen