Italy And The Euro: Sergio Mattarella Has Opened A Window Of Opportunity To Save The Single Currency

— this post authored by Panicos O. Demetriades, University of Leicester

Crisis looms large over the eurozone yet again. And this time it’s swirling around Italy. If Cyprus was a tropical storm for the euro in 2013 and Greece a hurricane in 2015 what will Italy turn out to be in 2018?

Italy’s public debt is 132% of GDP. This is the second highest in the euro area (Greece is still out in front with 180.8%). In absolute terms, however, Italy’s public debt at €2.3 trillion dwarfs Greece’s €320 billion. Meanwhile, the eurozone’s third largest economy contains a rising tide of populist, anti-EU sentiment.

It is therefore not surprising that Italy is now the biggest ever threat for the euro. As Greece showed, a sovereign debt crisis can quickly transform itself into a banking crisis, as depositors flock to take their money out.

Part of the problem is that the Five Star Movement and the League – the big winners in the March election who were set to form a coalition government – made electoral pledges so wild that to call them populist is to put it mildly. Among these was taking Italy out of the eurozone and cancelling €341 billion Italian debt held by the European Central Bank (ECB). 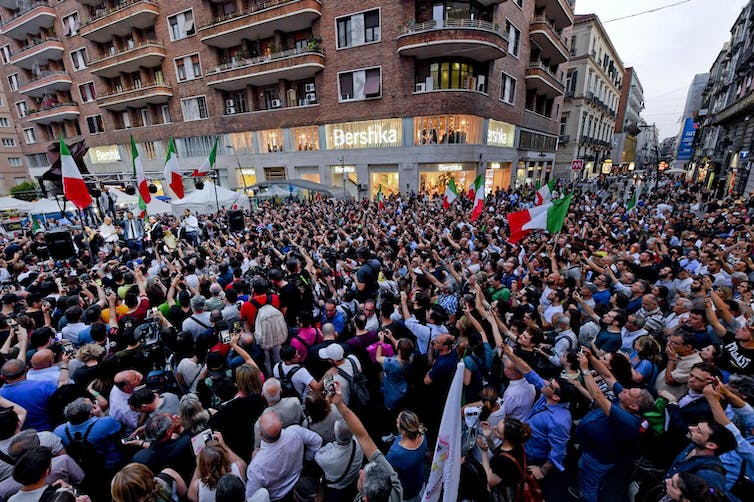 Italy has seen a ground swell of populist support. EPA-EFE

Although their draft programme for government had removed all direct references to a eurozone exit, it included enough anti-euro rhetoric and such drastic reforms to the eurozone’s architecture and economic policies that it sent shivers across the continent. What’s more, the coalition’s spending commitments are around €100 billion or 6% of Italy’s GDP, potentially making a bad public debt situation worse and conflicting with EU budgetary rules.

The two parties also want to “radically revise” the EU’s banking rules that protect public finances from failing banks and seek to compensate retail investors for any losses already incurred. Such a prospect could prove destabilising not just for Italy but also for Spain, Cyprus and Slovenia – where creditors were “bailed-in” (the opposite of a bail out). It would, in effect, undo all the progress towards a banking union in the eurozone and mean returning to the days when taxpayers footed the bill for bank failures.

The two parties even appeared to have had a Plan B in case Europe didn’t accept their demands. They were prepared for a “secret” exit from the euro over a weekend, accompanied by the cancellation of all Italian debt held by the ECB. No referendum was planned as this would cause financial havoc.

If Italy were to leave the euro, the ECB would have to write down its holdings of Italian public debt and all central banks across the eurozone would make massive losses. The respective governments – funded by the taxpayers – would have to foot the bill. That would be bad enough, even before considering whether the euro could survive an Italian exit and all the knock-on effects that would ensue.

The icing on the cake, which has led to the country’s latest political impasse, was the nomination of Paolo Sanova, a well-known eurosceptic, as finance minister. This explosive proposition was rejected by Sergio Mattarella, Italy’s president, who has vetoed the coalition’s proposed government, wisely claiming it would have destabilised the country. He has installed Carlo Cottarelli, a former IMF official, as interim prime minister, instead.

Had Italy’s president gone along with the Five Star Movement-League proposal, the crisis would have escalated very quickly. Markets and bank depositors were unlikely to wait until the “secret” weekend when Italy exits the euro. A bank run would have ensued almost immediately and that could have caused a new and unprecedented challenge for the ECB.

In the cases of Greece and Cyprus, the ECB supported their respective banking systems while political negotiations were ongoing and had a reasonable prospect of agreement. Even so, such support was never automatic. When negotiations stalled, it was frozen or restricted, resulting in extended bank holidays and capital controls. 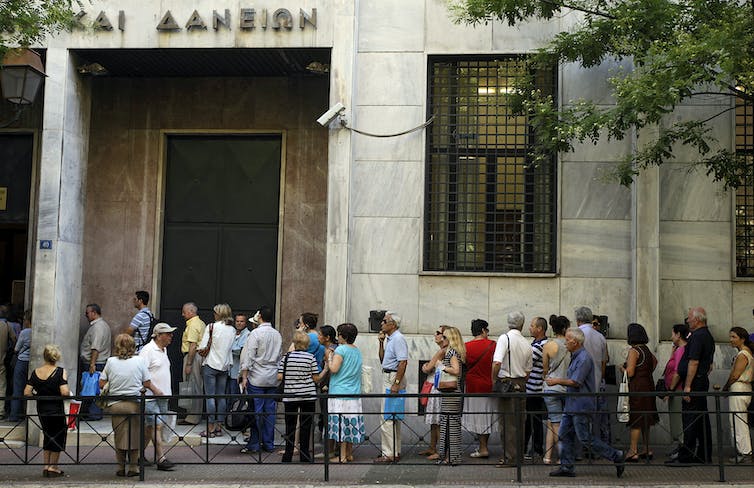 Queues for the bank in Greece in 2015. EPA/Orestis Panagiotou

In Italy’s case, the decision whether to provide such support would be much more of a poisoned chalice. Throwing good money after bad to support banks in a country whose government is threatening to abandon the euro could be seen as financially and legally reckless, if not politically suicidal.

Providing a lifeline to a government that is so hostile to the euro would have caused a furore in Germany where the ECB is already seen as too soft on the periphery, in general, and Italy in particular. Yet not supporting banks in Italy would lead to an immediate shut down of the banking system and an even bigger economic and political crisis, which could prove to be the final blow to the euro.

Unsurprisingly, Mattarella’s decision was welcomed with relief in both France and Germany, although Chancellor Angela Merkel was quick to stress that she would be willing to work with any coalition government that respected eurozone roles.

But the interim technocratic government is only a very short-term fix that may not even last until the end of summer, if it fails to get a vote of confidence in parliament. As the president’s actions are already inflaming anti-EU sentiment in Italy, a new election could well deliver an even more populist outcome. Financial markets are certainly becoming spooked and that can force an even earlier election.

Some commentators, including former Greek finance minister Yanis Varoufakis, are suggesting that the only way for the euro to withstand an Italian tsunami is for Berlin to show more flexibility. But if Berlin were to give in to the demands of one populist government, that could signal the beginning of the end for the euro, as it would be a gift to populist parties in other member states. In turn, that’s likely to lead to a rise of the far right in Germany – surely the beginning of the end of Europe as a project for peace.

I’m not saying the eurozone is perfect or that Italy should not receive any form of help. Far from it. But the interim government provides a small window of opportunity to fast track eurozone reforms. These need to be based on sound economic logic and pragmatic politics, rather than populist notions that are often poorly disguised ways to shift the burden of one country’s past excesses to others.

Time is limited, but there are already several sensible proposals around, including the one for a rainy day fund by the IMF, a proposal for a new debt instrument by the European Commission and reform ideas from top French and German economists.

This is the only way forward if the European project is to survive the new threat from Italy. Although the German government isn’t thrilled by these proposals, it may now be the last opportunity to save the eurozone. Unless its benefits are seen to be more widely shared, the euro’s days are numbered.