Outrageous Profit Potential From Three Of The World’s Worst Companies

Many investors focus exclusively on buying the best stocks, which is great… until they realize that they’re missing out on half the profit potential in front of them.

That’s not good enough for me; I don’t ever want to see you leave money on the table that could otherwise be in your pocket. 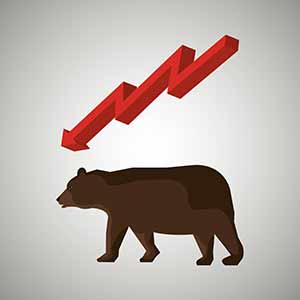 …associated with three of the world’s worst companies.

Most investors have a one-track mind, meaning they’re limited to thinking about how to make money when stocks are headed higher. And they freak out if there’s even the slightest squiggle on a chart in the other direction.

To be sure, there are great investments for these people. Take this small tech stock I’ve been tracking – it’s nearly doubled its customer base in the past year, and on Nov. 1, it’s expected to announce a 325% earnings growth, which could send its shares skyrocketing.

You can find all the details on this opportunity here.

But other investors – a precious few, really – rack up extraordinary returns when the going gets tough.

George Soros, for example, made a cool $1 billion in a single trade that famously almost broke the Bank of England in 1992.

John Paulson became a legend in 2007 when he reportedly made nearly $4 billion by using credit swaps to bet against the subprime mortgage market.

Jim Chanos runs the $3 billion Kynikos Associates and is best known for having correctly shorted Enron just prior to its collapse.

Obviously, going against the grain isn’t for everybody – it takes a lot of guts and more than a little conviction to do it profitably. Not to mention a healthy dose of discipline.

Done right, though, it can really boost your profits. And, best of all, you’ll never fear a market correction ever again!

How to Short a Stock

You have to have brokerage approval and an appropriate amount of collateral on hand to do it. That’s because, technically speaking, you’re “borrowing shares” to sell them before you actually own them.

When you buy a stock, you are laying out cash at a specific price and hoping to sell it later for a higher price. You believe the price of that stock is going to rise.

When you short a stock, you are doing the exact opposite. You believe the price is going to decline, so you sell it first and then buy it back at a later date and presumably at a cheaper price. Cash proceeds from selling are transferred into your account immediately.

When you want to exit a short trade, you have to “cover” the trade, meaning you have to buy those same shares at the prevailing market price and replace the ones you’ve borrowed from your broker.

The difference between what you received when you sold and what you paid when you exited is your profit. Of course, if the stock actually rises in price, the difference is your loss because it will cost you more to buy the same shares you’ve already sold, so risk management is critical.

Here’s a simple example that may help.

Let’s say George thinks XYZ is doomed, so he checks with his broker to see if those shares are available for shorting – meaning the broker has them in “inventory.”

The answer is yes, so George sells 100 shares of XYZ stock short at $100. He collects $10,000 in proceeds for his troubles. That money is deposited directly in his brokerage account.

George decides he’s not going to be greedy so he elects to buy the shares back or “cover” the trade, as it is known in trader-speak. He takes the $10,000 he received when he sold and spends $2,500 of it to buy back the shares and return them to his broker.

The $7,500 difference between what he received and what he used to buy his way out of the trade is his profit in this example, excluding transaction costs that I haven’t included here for simplicity’s sake.

Obviously the reverse is true, too. Had XYZ’s price risen above $100, George would need more money to buy shares back, so the trade would have been a loss had he exited at that point.

My Favorite Stocks to Short Now

So how do you find the best “short” candidates?

That’s like asking what flavor of ice cream you like. There are as many ways of finding compelling short candidates as there are ways of finding exciting upside opportunities. Some are technical, while others are fundamental.

I prefer a far simpler approach that combines social, technical, and fundamental data.

Media darlings make great short candidates because the hype machine is in high gear and people aren’t thinking clearly about what a stock is really worth when it’s in the headlines every morning for all the “right” reasons.

That was the case with Shake Shack Inc. (NYSE: SHAK) when I suggested Total Wealth readers short the company on May 22, 2015 – the very day it closed at its all-time high of $92.86. Anybody who followed along had the opportunity bank at least 65.6% by the following January. I brought other companies ripe for a fall from grace to your attention, too, including Wells Fargo, Twitter, GoPro, and Zoe’s Kitchen, just to name a few.

Stocks with huge debt but very little free cash flow to service it are also great short candidates. You can identify ’em using any number of popular Internet screeners.

Technically speaking, I love charts that look like ski-jumps, especially when they’re media-driven and the companies in question have no logical path to profits. Nothing goes up forever.

And I positively turn into a drooling idiot when I see companies that no longer have a valid investment premise because that means the business case for their survival is tenuous at best. Ultimately that translates to lower earnings, a complete failure on the bottom line and, hopefully, big profits in your bank account.

In that spirit, here are three of the “worst” companies I can find – all of which have triple-digit profit potential…

This is an iconic brand that I don’t think will be around in five years. Retail foot traffic continues to fall at a precipitous rate and the company is scrounging up billions in cash by selling its most valuable assets including – potentially – Kenmore, Craftsman, and even DieHard. I think bankruptcy and liquidation are all but inevitable.

The stock is struggling in a retail ghost town of once-proud brands. Same-store sales are unlikely to rise to the point where they create meaningful profits in an age where Amazon has permanently altered the retail bricks-and-mortar experience. It’s only a matter of time.

The company has no redeeming value and suitors aren’t just walking away. They’re running in the other direction judging from a blizzard of interviews telling the investing public why “they’re not interested,” which is highly unusual given how confidential these things usually are.

More than 1 billion people have tried Twitter and gone elsewhere. I’ve got to believe that employees aren’t far behind when you consider that management has used company stock aggressively as a compensation tool. At $16.83 a share, it’s 40% below the IPO price and dropping. I think it’s worth $1 a share at the moment – and that could be generous.

No doubt we could spend days on the finer points – and we will.

My goal today is simply that you understand the potential that comes from playing the market in both directions by choosing the world’s “worst” companies as your profit play.

Believe me, you’ll never forget the first time you score a triple-digit winner at a time when everybody else is running for cover.

Should We Believe Next Week’s BLS Jobs Report?